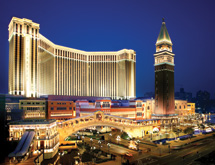 With eight integrated resorts across two continents, it’s a wonder Las Vegas Sands Corp. can keep anything straight. But incredibly, whether a guest is dining at one of its integrated resorts in Las Vegas or relaxing at one of its properties in Macao, that guest will find the same spirit and quality at each one, and its procurement and supply chain organization contributes significantly to this effort.

The integrated resort developer and operator owns two resorts on the Las Vegas Strip: The Venetian and The Palazzo. Its other U.S. resort, Sands Bethlehem has been open in Pennsylvania since 2009. Its Asia properties include Sands Macao, The Venetian Macao, Four Season Hotel Macao, Sands Cotai Central and Marina Bay Sands, as well as the forthcoming Parisian that is currently under construction and will open in 2015. The supply chain department is in charge of making sure all the necessary services and materials for that construction project are procured. It’s in charge of a whole lot more, too.

“When you look at a large integrated resort, you’re responsible for buying everything,” Chief Procurement and Sustainability Officer Norbert Riezler explains. “It includes design, [and] architectural and construction contracts, which can be very large. Then it goes from buying anything you see in the hotel rooms – from the carpet to the furniture to the televisions – straight into the casinos: the slot machines, the tables, the dice, the cards. Anything you see in the meeting or convention areas and the restaurants – glassware, silverware; the food items. It also includes support services, such as data services for computers, laundry service, labor service. It’s a wide array of products and services that we handle for the company.”

While each of Las Vegas Sand’s properties are unique with its own culture,  the company is implementing the same standards at its U.S. and Asian properties so long as those standards enhance guest experience or drive economies of scale. For instance towels, linens and room amenities have come into alignment to drive global synergies, allowing the company to leverage economies of scale and solidify its brand identity. There are many tools that Riezler and his team use to perfect its procurement process and one of those is supplier segmentation.

“The way we categorize our segmentations is by asking how big is the guest impact and also how high is the switching cost,” Riezler says. “We do the segmentation model based on those areas and we put suppliers into four quadrants. We have strategic suppliers, alliance suppliers, transactional suppliers and critical suppliers. We segment the supply base that way and it allows us to decide what type of relationship we should have with various suppliers.”

Riezler defines a transactional supplier as someone the end-customers don’t have much perception of, but are integral to the company’s management systems, such as office supplies. Las Vegas Sands will sort through providers that can meet its needs and then select the lowest-cost option. The company’s list of critical suppliers, however, includes vendors where the switching cost is high and it’s preferable to maintain a long-term relationship with one vendor.

“Elevator maintenance would fall into that critical category,” Riezler explains. “So we make sure that when we purchase elevators and escalators that the purchase is tied to long-term maintenance agreements where we really leverage the company spend versus separating the initial purchase from the ongoing maintenance requirements.”

Suppliers falling into the alliance and strategic segments are among a selective group. Rather than the average vendor relationship, these segments focus on developing partnerships through shared information. Riezler says it’s an open relationship with preferred suppliers, such as its chips and cards supplier, that results in vendors bringing greater innovation and technology to Las Vegas Sands and helping the company to solve problems and drive cost efficiency.

“Just like in life, in the procurement organization it’s the squeaky wheels that get the attention,” Riezler says. “What segmentation does is it helps the procurement organization and the entire organization focus their attention in the right areas with the right suppliers. While most of our suppliers are great partners, if you’re dealing with a commodity like electricity, it’s a transactional approach and making sure you lock in the best deal. But with an alliance partner, it’s a more open approach with business reviews and technology sharing.”

The categories are reviewed yearly to make sure each supplier is in the correct segment. Operational changes at the supplier’s company and spend trends at Las Vegas Sands can determine a supplier moving from transactional to critical or vice versa.

Supplier reviews have also led to another project the company will be launching this year. Riezler says as the young company has matured, it decided to do something fairly new to the resort industry and host supplier excellence awards. The awards are split into seven categories:

“It’s been announced internationally and during the selection process we wanted to engage all 50,000 employees,” Riezler says. “We have a system to nominate suppliers and will announce winners for the first time this year. We will hand out four sets of seven awards since we are in four areas – Singapore, Macao, Las Vegas and Pennsylvania. This is the first year we’ll be doing it. In an integrated resort or gaming or hospitality company, these types of supplier awards are not that typical or common but I think it will become a trend.” ­­­