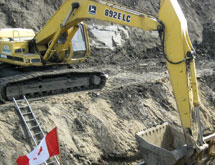 The Ministry of Highways and Infrastructure is partnering with the Canadian government, the city of Regina, Canadian Pacific (CP) Railway and the Rural Municipality of Sherwood, to develop a new inter-modal transportation facility and related road infrastructure.

The Global Transportation Hub (GTH) will provide Saskatchewan exporters with state-of-the-art links to national, North American and global markets, create new jobs and investment opportunities, improve traffic flow and safety in and around Regina, and provide a new opportunity to share in the benefits of Saskatchewan’s economy.

“It’s a bit of a game-changer for us,” Kelly Wyatt, director of development engineering for Regina says. “There are opportunities for employment, and it puts us on the map as a distribution center for North America. It’s a really exciting development for Regina’s economy.”

The GTH will be used to efficiently transfer shipping containers between trains and trucks. The government of Saskatchewan notes that the freight does not actually have to be handled when changing between modes, allowing for improved security and reduced damage and loss, while also allowing cargo to be shipped quickly and efficiently.

The existing CP intermodal facility is being relocated from downtown Regina to a site west of the city. A new overpass at the intersection of Highway 1 and Lewan Drive, and a connecting road between High­ways 1 and 11 will be built to allow for access to the GTH site.

The project’s cost is $150 million, with a $27 million contribution through the national government’s Building Canada suite of programs.

According to the government, Saskatchewan relies on exports to create jobs and generate economic prosperity more than any other province in Canada.

“Be it agricultural commodities, minerals, potash, oil or manufactured goods, what the Saskatch­ewan economy produces is in demand across Canada, throughout North America and around the world,” the government of Saskatchewan says.

Because of this reliance on exports, there is a need for state-of-the-art links to national and international transportation systems and global supply chains, which Wyatt says the GTH will provide.

So far, Wyatt explains that the project has gone well. “Contractors are excited to be a part of a project changing the local landscape,” she states. “We have good relationships with our contractors, and there is countrywide interest in the project.”

One contractor is Odan/Detech Group Inc. of Burlington, Ontario. The company is the lead consultant in designing and overseeing construction of GTH’s wastewater pump station – a centralized facility located approximately in the center of the GTH site.

The pump station will service GTH’s 910 hectares and be built of reinforced concrete. “It’s a good-looking building; you wouldn’t be able to tell what it is,” Odan/Detech President John Krpan says. “It’s an important structure. It’s a post-disaster structure and pumps sewage from [the GTH area] to a wastewater treatment facility about four kilometers away.”

Krpan notes that Odan/Detech has experience building municipal infrastructure such as pumping stations, which it needed to help Regina decide on the proper way to build the treatment facility.

“We convinced the city to use wet well pumps,” he explains. “We told them it is the most efficient system and can save a huge amount of dollars in ventilating.”

Krpan says that suction pipes going to the wet wells have to take in huge amounts of air, which is expensive. But with Odan/Detech’s system and design, suction pipes and vents will be eliminated, with oversized pumps forcing the water through the piping.

“The city thought it would come in around $12 million, and our estimation was a little over $8 million – and it came in right at that point,” Krpan states. “It’s a nice city to work with – very nice people.”

Through the GTH, Regina says its supply chain will be more efficient and economic development opportunities will be maximized, making businesses more competitive, creating jobs, and alleviating traffic congestion in and around the city.

In addition, the province believes the GTH will stimulate new investment and development opportunities, giving the region a new opportunity to share in the benefits of Saskatchewan’s booming economy.

The biggest challenge to the project, Wyatt notes, is the size. “The magnitude of what is being built at one time is more than most neighborhoods,” she says. “It’s many years of infrastructure.”

However, Wyatt points out that the project is moving quickly and there have been no major obstacles. “The time frame was always a challenge, but this project has gone exceedingly well,” she says. “The team has done a great job. It was a good technical and skill challenge, but we are at a point now where all the pieces are falling into place.”

Not only will the GTH attract new industries and freight service providers, but the road infrastructure will allow the development of new commercial, retail and residential development, the city notes. Wyatt says there is an eye on expansion.

“It seems like a great opportunity to foster additional residential, commercial and industrial developments,” Wyatt states.

The government of Saskatchewan says Regina is an ideal location for a major intermodal transportation facility because of its strategic location in North American and international supply chains. It says Canada is well-positioned to take advantage of the growing trade between Asia and North America, and that its west coast ports are three to five days sailing time closer to Asia than U.S. ports. The province adds that this is a competitive advantage with companies adopting just-in-time delivery inventory strategies.

“The short-term goal for us is to ensure we provide the services the GTH will need starting this summer,” Wyatt says. “But the long-term goal is for this to be a really viable, exciting part of the city and leverage economic growth going forward.

“It’s our objective to see the entire development go well, as well as the first projects, with the city and its funding partners providing the services that will support ongoing sustainable industrial development, and provide a  great economic opportunity for the region and the country.”

The government of Saskatchewan says its economy is dependent on the ability to get products to market quickly and efficiently. To accommodate this, the Ministry of Highways and Infrastructure has created the Rolling Five Year Capital Plan for high­­­­­­­way construction.

The government calls the plan the most sophisticated investment strategy in transportation infrastructure in the history of the province. Projects are prioritized based on economic and investment indicators set by engineers and road experts.

The province says the investments will result in infrastructure for a growing economy that depends on the safe and efficient movement of goods.