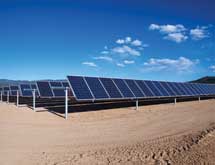 As federal regulations of carbon dioxide emissions continue to tighten, utilities throughout the United States have been forced to change how they source their power. Although PNM Resources has felt the tug of these increasingly strict regulations in the last few years, the New Mexico-based utility is ahead of the game in terms of reducing its carbon footprint because it was working toward that goal long before it was federally mandated.

Within the state of New Mexico with regard to generation, we set very progressive goals as far as our mix of renewables-to-fossil business,  Director of Supply Chan Carter Cherry says.

With its headquarters in Albuquerque, N.M., PNM Resources is an energy-holding company with 2012 consolidated operating revenues of $1.3 billion. Through regulated utilities PNM and TNMP, PNM Resources delivers electricity to more than 738,000 homes and businesses in New Mexico and Texas. PNM has been in business for more than 90 years, and it has a reputation with shareholders for value, customer satisfaction and service reliability, the company states.

As an energy-holding firm, PNM Resources has a generation capacity of more than 2,530 megawatts through a balance of coal, natural gas, nuclear, wind and solar resources. Cherry says the company expects to grow by approximately 10,000 residential and commercial customers in Texas and New Mexico by the end of 2013.

According to Cherry, the PNM side of the business is vertically integrated with its own distribution capabilities, which include generating the power as well as distributing to residential and commercial customers. TNMP is PNM Resources’ electric transmission and distribution company in Texas, which delivers power, maintains and reads meters and constructs and maintains power lines.

PNM Resources long has been on the forefront of utilizing renewable sources of energy to provide power to its clients. Cherry says PNM Resources boasts a balanced mix of generation from fossil fuels and renewable resources, and it had this balance years before sustainable practices were even en vogue.

Our generation capability consists of coal, natural gas, nuclear, wind and solar, so we have a little bit of each,  Cherry says.

Today, however, Cherry says the Obama administration is dedicated to preventing further climate change. The regulations mandated for these efforts have changed the entire industry.

“Those are the things that are really driving change within the industry overall, and we’re feeling those effects as much or more than any other electric utility,” Cherry says.  A lot of these regulatory concerns are driven by air quality regulations on CO2 emissions, that the EPA mandates.

PNM Resources has kept up with its own progressive goals to add renewable energy diversity to its generation portfolio. In the state of New Mexico alone, Cherry says the company has invested more than $100 million into solar generation capability in the past two years. In the solar space, rooftop installations for residential and commercial customers continue to grow in popularity. The company also buys wind power from a large wind farm located in the eastern part of the state.

Challenges for companies like PNM Resources include how to connect these distributed generation sources to the existing power grid to help them avoid disruptions in service.

“As far as residential and small business goes, we’re looking at how do they get integrated onto the grid so reliable, cost-effective power can fill the gaps when solar or wind can’t actually provide the power,” Cherry says. “Unfortunately, peak generation is not always at the time peak demand occurs, so we must have fast dial-up capability with traditional generating assets.” ­­­