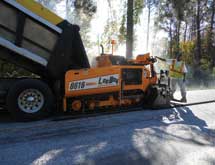 A can-do spirit and strong corporate backing guide VT LeeBoy’s supply chain and manufacturing operations. “We feel we can do anything, and that’s what we do all the time,” says Patrick Turner, supply chain director for the Lincolnton, N.C.-based company. “We don’t spend a lot of time talking about what we can’t do and why we can’t do it. By and large, the whole company focuses on what we can do and what’s the best way to do it.”

The company, founded in 1964 by B.R. Lee, specializes in manufacturing road construction and maintenance equipment under the LeeBoy and Rosco brands and has recently added the LeeBoy Performance brand to its portfolio. VT LeeBoy’s products include asphalt pavers and distributors, graders, loaders, tack distributors and pothole patchers. Singapore Technologies Engineering (STE), a global engineering group serving the aerospace, electronics, land systems and marine sectors, purchased the company in 2006.

STE’s acquisition of VT LeeBoy allowed it to expand its capabilities into the commercial and municipal markets. VT LeeBoy’s customers include governmental entities as well as small to mid-sized paving and other contractors, Turner says.

All of the company’s equipment is built with quality and innovation in mind. “Innovation and responding to customers’ needs are what made this company,” he adds. “For many of our customers, our equipment is the only machine of its kind they may use, so if it isn’t running, they’re not making any money.”

“Every day I have a plan for every minute; that plan usually changes 20 times per day, but I believe you always have to look forward,” Turner says. “It’s easy to get bogged down in what’s going wrong, but for the most part that’s wasted time. You have to be willing to change your plan on the fly and keep working that plan until you have to change it again.”

Much of the company’s supply chain and production planning is based on monthly sales and operations meetings. The company’s CEO, salespeople and other leaders look closely at existing orders, customer feedback, municipal bidding status and other data during these meetings. “We don’t really have a forecast from our dealers or end-users,” he adds. “Our planning is really a lot of pulling and pushing – we give it our best guess, drive our forecast and source materials from these meetings. We’re constantly reacting to what’s really happening on the market.”

The company’s forecasting is also closely tied to housing starts. Although these have been low since the 2008 recession, Turner says the company has seen activity increase recently and expects even more growth to come. “We believe there’s a lot of pent-up demand that’s ready to break loose,” he notes.

VT LeeBoy builds all of its equipment to order and ships on a four to six-week turnaround. The company’s required lead times from many of its vendors can extend as far out as nine months. The company uses supplier kanban systems and sets minimum replenishment levels to ensure it has components on hand to meet orders.

The company manages its inventory complexity and other internal functions through ERP and MRP systems, and uses a barcoding system to track its more than 35 different equipment models.

VT LeeBoy in recent years has made an effort to expand its sourcing base. “We used to be very vulnerable to suppliers when it came to price and availability and had roughly three or four suppliers covering about 80 percent of our total supply spend,” Turner notes.

“Now we have a number of backups in place and have 20 suppliers covering the same amount of spend. Multisourcing is a big part of our company’s changes during the last few years and [it is] what we’ll continue to do.”

In addition to expanding the number of vendors it uses, the company is also making an effort to increase its internal engineering and design capabilities. “In the past, we used to rely on our suppliers to design things for us, but we’re doing that a lot less now,” he adds.

Turner credits VT LeeBoy’s ownership for guiding the company through difficult economic conditions in recent years. “Had we not had STE’s leadership during the recession, I doubt we’d be here today,” he says, noting the owners continued to invest in the company and show patience even as VT LeeBoy was forced to make difficult decisions. “They really saw us through the storm.”

With the commercial side of the company’s business now on the rebound, further growth is anticipated domestically as well as internationally. The company is drawing on STE’s resources to expand its dealer network throughout the world. VT LeeBoy’s expansion efforts will bear more fruit in July, when the company makes its first-ever shipment of equipment to Africa.

“About 25 to 30 percent of our overall business is international, and we intend for that to be higher,” Turner says. ­­­