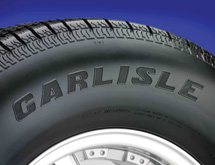 “We’re one of the top [tire companies], overall,” he declares.

Headquartered in Franklin, Tenn., CTP manufactures industrial belts, specialty tires and wheels that are also used in markets such as lawn and garden, oil, outdoor power, recreation and transportation. Busch says the firm’s roots go back to 1917, when Charles S. Moomy started Carlisle Tire and Rubber Co. in Carlisle, Pa.

At first, Carlisle Tire operated with the sole purpose of selling inner tubes to Montgomery Ward & Co. After going through tough times due to the depression, Carlisle Tire was purchased by Pharis Tire and Rubber Co. in 1943.

Six years later, the company’s board liquidated Carlisle Tire and distributed its stock to Pharis stockholders. Afterward, it became Carlisle Cos. Inc., and in the 1990s, the firm acquired multiple wheel manufacturers to increase its product offerings.

In 2011, the company consolidated its tire, wheel and belt operations as CTP. This year, Busch says, Carlisle Corp. recently announced its plans to sell the division, leaving its future somewhat uncertain.

Although CTP’s ownership may change soon, the firm is moving forward with business as usual and quite successful, Busch asserts. Today, Carlisle Cos. Inc.’s stock is publicly traded on the New York Stock Exchange and CTP’s clients include prominent firms such as John Deere and Polaris Industries Inc. “We have long-term relationships with many of our customers,” Busch says.

He adds that CTP is a leader in several of the segments it serves, including outdoor power equipment and high-speed trailers. “[In] these key markets we participate in, if we’re not the largest, we’re one of the top three,” Busch asserts.

CTP’s offerings distinguish it from its competitors. For instance, the company sells such brands as Cragar Wheel, which “goes back to the ‘60s found on many hot rod cars,” Busch describes.

Additionally, unlike other providers, CTP can sell tires and wheels together. “The fact that we can offer that combination in a package creates some separation,” he says, noting that other manufacturers may only produce and sell the tire or the wheels.

CTP faces many challenges in its supply chain, but managing its costs and risks are the largest ones, Busch says. This includes the volatility of commodity prices, including rubber.

The price of rubber “went up significantly in 2008 and 2009 it plummeted,” he says, noting that prices surged again in 2011. Managing margins with these shifts makes business harder for CTP, Busch admits.

“Managing a China supply chain is a growing risk not only for ourselves, but for anybody that’s been dealing with [them],” he says. “The gap is narrowing between domestic and what used to be a very low-cost region.”

To cope, Busch has implemented global supply chain commodity managers who look for the right places to purchase products from. “That is being monitored constantly,” he says.

Its managers work closely with R&D, making changes in compound mix in products, such as using synthetic rubber compounds versus natural rubber. Although there may be a difference in pennies with the costs per pound, those savings can add up to millions of dollars, Busch says.

Busch joined CTP three years ago after working for a variety of automotive and aerospace companies. He credits the company’s success to its recognizable brand name and the quality of its products.

When he came aboard the company, Busch says, the company was in the need of change. “Procurement wasn’t performing anywhere near what’s expected of us,” he says, noting that it had very poor visibility to any real-time data.

Since then, under the current leadership, the company has improved financially. “By no means is supply chain performing where we want it to be,” he says. “[But] we’ve started to outperform our objectives almost across the board, which is a credit to the team.”

The future is bright for CTP, Busch says. While it appears it will someday change owners, the sale “is a continued growth opportunity for Carlisle Transportation Products,” he says, noting that it has the opportunity to win back business it may have previously lost while expanding into previously untapped markets.

“It is my understanding that there are definitely a number of parties interested [in buying CTP],” Busch says. “I’m confident that CTP will only be sold to the right buyer that will be the best match for our future. What all this means for my procurement team [is] business as usual managing the daily challenges associated with a global supply chain to help ensure CTP remains competitive in all our global markets.”

Carlisle Transportation Products’ (CTP) recent additions to its products include its Sport Trail LH Trailer Tires. According to the company, the tires feature a modern tread design, reduced rolling resistance and improved contour.

This gives the tire an extended life, consistent wear and optimized performance. “The bias ply construction of the Sport Trail LH is optimal where rugged performance and sidewall puncture resistance is required – trailers for construction, utility, agriculture, light marine, light travel, cargo and sports,” it says.

This year, CTP won the honor of being named the official tire of Ray Scott’s Trophy Bass Retreat in Pintala, Ala. The retreat hosts approximately 150 clients annually on a 200-acre facility.

“We recognize the importance of being able to transport our boats and trailers from lake to lake,” Ray Scott says. “Regardless of the weather and terrain, we know that Carlisle Tires are designed to handle tough situations over prolonged time. When enthusiastic bass anglers travel from far and wide for a fishing trip of a lifetime, we have to rely on quality tires to get our boats around.”

CTP also provides promotional materials to the groups that catch the largest bass. “We’re really pleased with our relationship with Carlisle Tires,” Scott says. “Their commitment to quality is right in line with our commitment to providing our guests with a fishing trip they will never forget.” ­­­