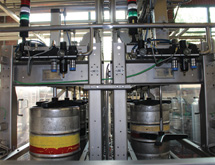 Even the term “supply chain” connotes a system of links, and when one of those links changes, the chain must change with it. So in 2011, when Craft Brew Alliance (CBA) made a major switch in its distribution network, the company had to build a system to support the new modus operandi.

CBA – which is the result of the 2008 merger between craft brew companies Redhook and Widmer Brothers – markets five brands that are distributed nationally and internationally. Redhook, Widmer Brothers, and Kona are available via tap,  bottle and cans.  The newest additions to the CBA portfolio are Omission beer, which undergoes a special process to remove gluten, and Square Mile Cider. It operates four breweries in Portland, Ore., Seattle, Portsmouth, N.H., and Kona, Hawaii.

“We started  transitioning out of the distribution centers in 2011 and completed the process in 2012,” CBA Senior Director of Supply Chain Kyle Jennings says. “We’ve been shipping direct to 575 wholesalers ever since. It was a massive change in the distribution model and it took about 14 months to complete. We had to come up with a system to support the change, and create the right team to manage the transition from indirect to direct distribution.”

As CBA began the changeover, it invested in a software suite from Logility with multiple modules that would help CBA transition smoothly. Nearly every facet of its supply chain, from transportation to forecasting, needed to evolve to meet CBA’s new requirements. A forefront concern, of course, was getting the product to the wholesalers.  As anyone can imagine, increasing deliveries from 12 centers to 575 wholesalers pretty much “blew up the freight model,” Jennings says. CBA adopted a new transportation planning management (TPM) system that could handle a larger network.

The system software optimizes routes by first taking the complete demand picture of what wholesalers need, “and then it says, ‘OK, wholesalers ABC need 10 cases here, 20 cases here and 30 cases here,’” Jennings explains. “That information goes into the TPM system and the TPM will build loads based on those needs and then route the loads.  It tries to get the most out of each truckload. You might put three deliveries on a truck,  going from New Hampshire  to Charlotte, then Atlanta, and on to Pensacola. It has the intelligence to plan the most efficient route and put the right orders together.”

Jennings says getting its TPM squared away was one of the greatest challenges, but before a single delivery even went out, there were other processes that needed some tweaking to fit CBA’s new distribution model.

“We put in processes to start operating pretty quickly,” Jennings says. “We began with inventory planning and demand planning so we could get the demand signal internally to know how much the wholesalers would need. That in turn fed a manufacturing-planning module that we configured for each brewery so they would know how much to make and where our inventory needed to be. Lastly, we aligned a team of replenishment planners who are responsible for ensuring the wholesalers get the product they need and oversee CBA’s relationship with the wholesaler inventory managers.”

CBA has invested time in streamlining its manufacturing process. A couple of years ago when Jennings first came to the company, he says CBA was constantly making late-game schedule changes to align with demand. Now, it puts a schedule out two weeks in advance so each brewery knows its throughput schedule for the next week and the week after. Jennings says the planning schedules have been more accurate; the schedule for the first week seldom changes and any changes made to the second week tend to be slight tweaks.

The schedules evolve due to more accurate forecasting, and CBA shares that forecasting with its core suppliers. The visibility into CBA’s demand allows its suppliers to plan production accordingly. For instance, its bottle manufacturer, Owens-Illinois (OI), uses CBA’s forecast to determine how many bottles of each kind it will need to manufacture for CBA. It also uses that forecast to order six-pack box cartons and large-carton boxes from CBA’s pre-approved box suppliers. The glass bottles are shipped to CBA already in the appropriate boxes. The bottles are filled, labeled, put back into the original box and readied for shipment, supporting CBA’s strong stance on sustainability by eliminating any waste from its carriers or cases

“For OI it’s been good because they can streamline more and reduce excess inventory,” Jennings says. “When we send those signals it gives vendors an idea as to what materials they will need to handle our order. It also makes sure that we have what we need when we need it. The worse thing I can do is shut down the brewery because we don’t have any glass bottles. It’s a bit of a symphony to get it all working together.”  ­­­