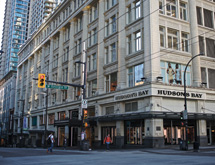 With a legacy that has lasted more than three centuries, Hudson’s Bay Company (HBC) has established itself as a leading retail firm in the United States and Canada. Senior Vice President of Supply Chain and Logistics Tony Manettas says the Toronto-based company was founded in 1670, making it “North America’s longest continually operating company.”

In the United States, the company has 48 Lord & Taylor department stores. “[We operate] a business that provides stylish, quality merchandise with a dedicated focus on service excellence,” he says, noting that the retailer also has three outlet locations and a significant online presence.

Although some retailers were forced to undergo consolidation in the last five years, “We’ve really gone to the offense and [added] new, exciting brands,” he says. These include Top Shop and Top Man, exclusive to Hudson’s Bay stores, and Black Brown, a private label menswear brand.

Today, he says, Hudson’s Bay stores operate with the goal to be the premier mid-tier retailer in its markets. “We feel we’ve got a leading position in that category,” he says.

HBC has strived to streamline its supply chain so it has the right goods in the right stores at the right time, Manettas says. Sometimes, this involves capacity planning on the different sides of the Canadian-U.S. border or altering the methods in which it ships goods, including increasing the speed.

Throughout these processes, “We really partner with our merchants and make sure the supply chain is constantly feeding those stores with new, fresh merchandise the customer is expecting,” Manettas says. This also involves prioritizing certain products over others so they get to stores faster.

That way, “Our stores are always in stock with the newest fashion merchandise that we have available to the chain,” he says. “We’ve isolated specific merchandise departments that have more of a fashion relevance and we work to speed up that supply chain for them.”

A development that also led HBC to reconfigure its supply chain was its sale of the majority of its Zellers store leaseholds, which it sold to Target in 2011. After selling 189 leases, the company had substantially fewer stores to service and routes to travel, Manettas says.

To make it more efficient, HBC closed four of its retail distribution centers in Canada and has expanded another site to bring return logistics back in house. Additionally, the company has been freer to use third-party providers in remote markets as final distribution points. “We’re creating a model that allows for flexibility and speed across all of Canada,” he says.

However, the company has not made any location changes to its U.S. distribution network. “We [still] have our one, main distribution center in Wilkes-Barre, Penn., to service both the retail and e-commerce fulfillment operations,” he says.

The company also recently completed a 200-square-foot expansion to the Wilkes facility to support e-commerce growth over the next few years. Additionally, the company also made changes to how it transports goods from the U.S. originating vendor sites to its distribution centers in the United States and Canada, by using existing transportation routes and third-party consolidation centers.

HBC has started converting its distribution centers to warehouse management for open systems (WMOSs) from Manhattan WMOS to create more uniformity and efficiency among its locations, Manettas says. So far, the company has seen strong results.

After converting its Toronto distribution center to a WMOS in 2010, “Not only have we seen better visibility, we’re much more productive,” he says, noting the location has had a 50 percent improvement.

HBC implemented the same system at a location in Vancouver in 2011 and experienced similar results, Manettas says. “We plan to bring the store retail side of the Lord & Taylor distribution center onto the same system,” he says.

HBC plans for continued growth. “HBC will look to continue to create and develop our brand relationships, and increase our productivity within our current stores,” he says.

“Our real main focus is continuing to drive the current stores,” he says, noting the company plans to open a Lord and Taylor location in Boca Raton, Fla., later this year.

It also will keep looking at opportunities online. “E-commerce is, without a question, one of the biggest growth vehicle opportunities we have as a company,” Manettas declares. ­­­