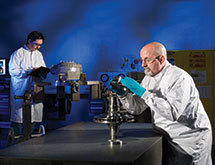 For more than 70 years, Aerojet Rocketdyne has conquered some of mankind’s greatest challenges in space, on land and at sea. The company’s products have powered thousands of rocket launches, including the iconic Apollo mission that landed the first humans on the moon. Its space shuttle engines helped successfully launch crew and cargo to low-Earth orbit more than 130 times, an outstanding record of success.

Aerojet Rocketdyne’s propulsion systems have played a vital role in placing commercial, military and government satellites into orbit, and have powered space-probe missions to every planet in the solar system. The Mars Curiosity rover is presently moving around the red planet, performing valuable experiments to determine whether life could have ever existed there – thanks to a power source developed by Aerojet Rocketdyne engineers.

These modern milestones are built on a foundation of propulsion achievements arcing back to the 1940s.  At that time, four colleagues from the California Institute of Technology – Dr. Frank J. Malina, Dr. Martin Summerfield, John W. Parsons, and E. S. Forman – gathered with renowned aerodynamicist Dr. Theodore von Kármán to discuss their shared passion – sending rockets into space.

That meeting ultimately led to the development of a critical new technology known as Jet Assisted Take Off (JATO), which for the first time in history, allowed heavily laden aircraft to take off from short runways and carrier decks. In March 1942, with the ominous clouds of WWII darkening the skies, von Kármán and his team decided to leverage their recent innovation and together, they launched the Aerojet Engineering Corporation in Pasadena, Calif. Led by then-first president Dr. von Kármán, Aerojet Rocketdyne ultimately supplied the U.S. Armed Forces with thousands of JATO units during WWII, making a significant impact on the safety of allied pilots, something that the company still does today.

Since then, leadership has been working to combine the best practices from each organization.“We have united two great organizations that are leveraging the best capabilities, technologies and expertise we have to maximize value,” says Hal Martin, vice president of supply chain and materiel management at Aerojet Rocketdyne. “For supply chain/materiel management, integration allows us to incorporate the ‘best-of-the-best’ practices from both legacy companies as we continue the path we embarked on last year toward an enterprise-wide center of excellence.”

That integration includes the use of Oracle – an enterprise resource-planning tool – which has enabled the company to connect all functions across the company to a single integrated operating system. Aerojet Rocketdyne also has incorporated category management, as well as a system that aggregates purchases into product categories across all company locations that allow for purchasing efficiency and affordability. In addition, the company has implemented a sales and operations planning process at all sites to efficiently and effectively manage customer demand.

Supply Chain uses operational excellence in lean and Six Sigma tools. The use of statistical process controls provides improved efficiency and improved quality, cost and delivery performance from the supply base.

In February 2014, Aerojet Rocketdyne hosted its first integrated suppliers conference with the theme of “affordability.”  More than 180 of the company’s suppliers and employees attended the day-and-a-half event in Los Angeles where they heard from Aerojet Rocketdyne leadership about the importance of working together to supply the best quality products at competitive rates.

Guests were also treated to two special guest speakers, Astronaut Jim Kelly and Army Ranger Nate Self. Kelly spoke about his experiences in space and the importance and reliability of every single part provided by Aerojet Rocketdyne suppliers. Self spoke about a mission he led in Afghanistan to rescue a Navy SEAL who had fallen into the hands of al-Qaeda fighters. Self discussed the trust and assurance that he has in the products of Aerojet Rocketdyne suppliers. The conference was a great success and enabled discussion about how the company and its suppliers move forward together.

The acquisition of Rocketdyne is not the first integration challenge in the company’s history. Shortly after the dawn of the 21st century, the company acquired a Redmond, Wash.-based space propulsion and fire suppression business from General Dynamic Ordnance and Tactical Systems. This acquisition brought with it a wealth of spacecraft and space lift propulsion capabilities and allowed the company to venture beyond space launch into in-space propulsion.

In 2003, the company further expanded its capabilities with the acquisition of Atlantic Research Corporation (ARC). ARC was a leading developer and manufacturer of advanced solid rocket propulsion systems, gas generators and auxiliary rocket motors for both space and defense applications. With every growth opportunity, Aerojet Rocketdyne has focused on ways to integrate best practices and leverage heritage expertise.

Martin says he is excited by the company’s eagerness to grow and evolve. “I’m proud of our openness and willingness for change management.”

He adds that the future looks bright as the company continues on its journey. “As these initiatives mature and become the fabric of the way we live and do business, Aerojet Rocketdyne will become an even stronger company.”

After Aerojet and Rocketdyne merged in 2013, the two companies integrated to play a major role in the successful placement of the second of five Mobile User Objective System (MUOS-2) satellites into orbit for the U.S. Navy. It was the first launch for the company as Aerojet Rocketdyne.

“Aerojet Rocketdyne’s diverse propulsion capabilities are critical to missions like this, trusted to not only assist with delivering the spacecraft to its final orbital destination, but also to keep it there, properly oriented, for its full intended mission life,” Steve Bouley, vice president of Space Launch Systems at Aerojet Rocketdyne, said in a press release. “Our record of mission success enables assured placement of such a valuable payload like MUOS which is anticipated to stay in service well past 2025.”

The five AJ60 SRBs were ignited at lift off, increasing the launch thrust of the Atlas V rocket by more than 1.9 million pounds. All Atlas V launches requiring extra boost performance have flown Aerojet Rocketdyne-produced SRBs and this particular flight included the 49th Aerojet Rocketdyne SRB delivered to ULA. These motors have demonstrated a 100 percent success record in flight.

“We are proud to be a long-time partner in ULA’s Atlas V program and our team is especially excited about this system’s role in protecting and improving the communications of our brave warfighters around the globe,” said Peter Cova, deputy, Space Launch Systems at Aerojet Rocketdyne in a press release. “This flight represents Aerojet Rocketdyne from top to bottom, showcasing our products and incorporating technologies from our various operating facilities around the country.”

A single RL10A-4-2 engine delivers 22,300 pounds of thrust to power the Atlas V upper-stage, burning cryogenic liquid hydrogen and liquid oxygen propellants along the way. For more than 50 years, the RL10 has been one of the United States’ most reliable upper-stage engines, accumulating one of the most impressive lists of accomplishments in the history of space propulsion.

MUOS-2 is a next-generation narrowband tactical satellite communications system that will provide mobile U.S. forces with reliable and secure global communication, including, for the first time, simultaneous voice and data capabilities. The Navy’s Program Executive Office for Space Systems and its Communications Satellite Program Office are responsible for the MUOS program. Lockheed Martin Space Systems Company is the MUOS prime contractor and lead system integrator.

With its world-class experience and expertise, Aerojet Rocketdyne is positioned to advance American leadership in defense, civil and commercial efforts, and help NASA realize its vision for space exploration.

Currently, the company is serving as a prime contractor for NASA’s next-generation spacecraft, NASA’s Space Launch System (SLS) and Orion. SLS is the largest rocket developed since the Apollo program and provides an unmatched combination of mass, volume and speed that can deliver humans and cargo to deep space faster, safer and more affordably than any other vehicle. The Orion spacecraft will house the astronauts making these trips to asteroids, the moon and ultimately Mars. SLS and Orion development is advanced, with manufacturing and testing underway across the country and is supported by a network of hundreds of suppliers representing 47 states.

Aerojet Rocketdyne also is supporting the defense industry. In June 2012, the sky rumbled and the ground shook as the three most powerful hydrogen-fueled liquid rocket engines ever built successfully boosted a U.S. government satellite into orbit. Developed by Aerojet Rocketdyne, the RS-68A engines thundered into the sky on their inaugural launch, boosting a United Launch Alliance Delta IV Heavy rocket from the pad at Cape Canaveral Air Force Station, Fla. Once above Earth’s atmosphere, the Aerojet Rocketdyne RL10B-2 engine provided upper-stage propulsion.

“The RS-68A engines were specifically developed for this mission, and to watch them fly successfully for the first time, with so much power, is truly gratifying,” Bouley said in a press release at the time. “This launch is testament to the reliability of our propulsion systems, and the capabilities of the talented people who make them a reality.  We are proud to help place these critical national security payloads into orbit to support our service men and women worldwide.”

The RS-68A is a liquid-hydrogen/liquid-oxygen booster engine designed to provide increased thrust and improved fuel efficiency for the Delta IV family of launch vehicles. It evolved from the RS-68 engine, which was developed and certified for commercial use with private company funds. Each RS-68A provides 702,000 pounds of lift-off thrust, or 39,000 more pounds of thrust than the RS-68 engine, with increased combustion efficiency as well. During hot-fire tests, the RS-68A engine demonstrated the ability to operate for 4,800 seconds of cumulative run time – more than 10 times what’s needed to boost the Delta IV Heavy rocket into space.

The RS-68, RS-68A and RL10 engines will power the Delta IV Evolved Expendable Launch Vehicles through the decade.

The test flight brought aviation closer than ever to the reality of regular, sustained hypersonic flight, and was a critical element in the progression to practical hypersonic propulsion, providing a greater understanding of hypersonic propulsion performance, control and structural durability, the company said in a press release.

During that planned flight, the unmanned WaveRider vehicle was carried beneath the wing of a U.S. Air Force B-52 and dropped from an altitude of about 50,000 feet over the Pacific Ocean off southern California.

A solid rocket booster fired and propelled the cruiser to scramjet takeover, creating the supersonic environment necessary to operate the engine. The scramjet successfully propelled the cruiser more than 230 nautical miles in approximately six minutes, streaking through the sky from Mach 4.8 to Mach 5.1 while climbing in altitude. The engine ran full duration, depleting all fuel as planned. It was the longest of the four X-51A test flights and the longest air-breathing hypersonic flight ever. Early indications show the propulsion system accomplished all objectives.

“We have the best workforce in the industry and we are committed to 100 percent safety and mission success as we continue to deliver performance, drive innovation and create opportunity,” Martin says.