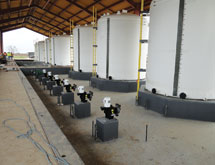 The future water supply needs of the city of Stock­ton, Calif., soon will be met through a $217 million project that will provide its 150,000 water service area residents with water from the San Joaquin River.

The Delta Water Supply Project in­cludes the construction of an intake and pump station, raw and treated water lines, and a water treatment plant. The project will provide 30 million gallons of water a day once completed in 2012, says Robert Granberg, deputy director of water resources planning for the city of Stockton and project manager.

Future phases that would further in­crease capacity to 60 million gallons a day are planned. “I think this is going to set the city up for many years in the future,” he adds.

The project is funded through a combination of bonds backed by month­ly customer fees and new connection fees, as well as a $12.5 million state grant.

For the city, the start of construction in fall 2009 marked the culmination of decades of work to establish its own water supply. Stockton was issued its own water right in 2006 after a six-year-long feasibility and environmental clearance effort. Discussions about the water right date back to the late 1960s, when the state of California deemed the groundwater basin unable to support demand, Granberg says.

Stockton receives 70 percent of its total supply through water districts and other sources. The cost and reliability of these sources are largely dependent on the market, weather and environmental restrictions.

“We will continue to purchase water from districts going forward, but this project will provide more reliability and allow the city to properly manage the groundwater basin as a drought re­serve,” he adds. “This project is sensitive to the environment, protects the ground­water basin and allows for many years of a secure, cost-effective, reliable water supply.”

Work is proceeding on schedule on the main components of the project, with the intake and pump station roughly 50 percent complete. Pipe­lines are about 65 percent complete, and more than 75 percent of the treatment plant is in place, Granberg says.

CDM Constructors Inc. is the general contractor and construction manager on the water treatment plant and pipelines project components. Other key contractors on the project include San Francisco-based environmental consulting firm ESA.

The concrete and steel treatment plant is being built on a 60-acre site in Stockton. Treatment plant processes in­clude pre-ozonation, flocculation and sedimentation, membrane filtration and chlorine disinfection. These processes will regulate taste and odors and filter out bacteria and particles, among other treatments.

“We appreciate their desire to have a successful project,” Granberg adds. Carollo Engineers is providing construction management of the intake and pump station.

The intake and pump station, located on a two-acre site on the San Joa­quin River, will draw water out from the river through state-of-the-art fish screens. Water will then be pumped through a 12-mile-long raw water line 54-inches in diameter to the treatment plant. The intake station will be supported by steel and concrete piles through peat soils, he adds.

The city of Stockton is working closely in conjunction with contractors and subcontractors to complete the project on a restrictive timeline.

One major scheduling challenge on the project is a state environmental re­striction on work between October and May because of hibernating giant garter snakes in the area. Crews monitor for the endangered snakes during construction season and notify biologists if they’re found in the area. Fencing also is used to separate the snakes’ habitat from the construction site, according to Granberg.

Another site challenge is related to installing the pipeline beneath soft peat soil. Crews are excavating 25 feet beneath the peat soil onto a stable underground sand layer, he adds.

During dewatering before pipeline installation, crews discovered a plume of the petroleum additive methyl tertiary butyl ether. The city obtained a permit from the state to build a hydraulic barrier around the contaminated area to contain it.

Granberg credits the contractors with their efforts to overcome these and other challenges. He says that without the cooperation these contractors have displayed throughout the process, the project wouldn’t have been nearly as successful as it has been. “They’ve built the project in the spirit of partnership and engagement with the city,” he adds.