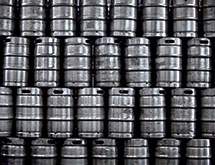 The difficult part is finding a reliable logistics and supply chain partner. Food and beverage companies need partners with industry-specific expertise that can devise customized solutions. Taking a look at what others have done can help food and beverage producers find the right partners for their needs.

One such example comes from Avery Brewing. Founded in Boulder, Colo., in 1993, Avery Brewing is a relatively small craft beer company known as the brewers of Avery IPA, White Rascal Belgian-Style White Ale, The Maharaja Imperial IPA, Mephistopheles’ Stout and more than 20 other year-round and seasonal beers. Avery Brewing will move into a new $27 million, 96,000-square-foot brewery in early 2015.

MicroStar delivers kegs for Avery Brewing so it doesn’t have to worry about keg ownership. MicroStar takes care of the supply chain complexity associated with keg logistics, and it repairs and maintains the fleet of kegs. Choosing MicroStar instead of owning its own kegs also allowed Avery Brewing to reduce its carbon footprint by more than 65,000 kg of CO2 over the past 12 months alone.

Late last year, Avery Brewing and MicroStar announced a multi-year extension of their ongoing partnership. “We see the MicroStar team as an extension of our brewery,” says Avery Founder and CEO Adam Avery.  “Their pooled-keg model, national scale and commitment to customer service are the perfect fit for Avery Brewing.”

“Avery’s commitment to brewing world-class, category-defying ales and lagers and their adherence to the highest quality standards have led to their skyrocketing demand,” says MicroStar President and CEO Michael Hranicka. “We’re proud to help support pioneering brewers like Avery.”

In late 2014, the company announced a partnership with Westfalia Technologies, a provider of logistics solutions for manufacturers, warehouses and distribution centers since 1992. The companies announced the opening of Southern Wine & Spirits of America’s newly automated facility in Union City, Calif. Utilizing Westfalia’s automated storage and retrieval system (AS/RS) technology and Savanna.NET warehousing software, the facility is one of the most technologically advanced in the beverage alcohol industry.

“We know the importance Southern places on service,” adds Dan Labell, owner and president of Westfalia Technologies. “Our automation technology will help the company realize new efficiencies, better utilize space and position themselves for growth.”