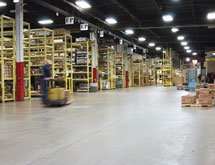 “I view us as two companies under one roof,” he adds. Products distributed by Upper Lakes Foods include dry, frozen and refrigerated products along with fresh meats, paper goods, janitorial supplies, dairy, produce and equipment and supply items. Most of the products offered through the Northfield location are specifically requested by each national chain account and proprietary to that chain.

The company’s broadline distribution territory includes the entire state of Minnesota and extends east to Milwaukee and Madison, Wis., south to Des Moines, Iowa, and west to Bismarck, N.D. “We are the largest independent broadline distributor in our market,” Bradshaw says.

The company was founded in 1967 by Lawrence Sorensen. His wife Patricia and children took over the company after his passing in 2005. “His philosophy of working with the customer to be profitable continues today,” President Sue Ryan says.

While the company’s initial focus on independent retailers has widened since its founding, smaller businesses continue to be an important part of Upper Lakes Foods’ business.

“All of our customers are very important to us,” Ryan adds. “We strive to bring them the best service and best quality with the best people, our employees.”

Upper Lakes Foods offers a number of services aimed at improving the bottom lines of its customers. “We are looking as a sales entity and a company to work with our restaurant and customers to improve their profit­ability,” Bradshaw says. “We try to develop a relationship that is predicated on them making more money doing business with us than they did before they worked with us.”

For its healthcare and camping customers, Upper Lakes works on creating a menu that projects a cost per meal. “Most of our competitors try to do a cost of goods analysis on the front end, but those prices can change,” Bradshaw says. “What we’re trying to say to customers is if you have $5 to spend, lets look at whether you’ve achieved feeding someone for that amount, instead of just saying that we have the cheapest ketchup.”

Upper Lakes recently started using advanced logistical software Bradshaw says is hoped to both assist customers and improve in-house efficiency. The technology allows users to input customer locations and sales territories and project potential delivery and route scenarios. “This gives us a chance to do ‘what if’ scenarios and analyze our routes in a way we haven’t in the past,” he adds. “This allows us to look at our routing structures and make them more efficient.”

“We can use this information to go back to our customer and create a relationship beneficial to both of us,” Bradshaw says.

Upper Lakes also distinguishes itself through its staff, which includes a salaried sales force. “Every outside sales person here is teamed with an inside sales person, and the customer knows both of them,” Bradshaw says. “This is very important when it comes to our level of customer service.”

Employees are routinely trained in a number of different areas including safety, food management and nutrition. Safety training in particular is a major area of emphasis, particularly for delivery drivers. These training efforts recently paid off when the company was awarded the Volvo Trucks North America Safety Award in October 2010, Ryan says.

The award recognizes the safety records of trucks fleets with at least five Class 8 tractor units, according to Volvo.

Upper Lakes Foods continues to invest in its staff and other resources in order to meet the demands of a growing and changing retail market. “The demographics of the industry are such that there will be more regional chains we’re going to have to be better at selling to,” Bradshaw says.

Bradshaw also expects the company to better utilize the resources of Unipro Foodservice Inc., a foodservice network with more than 328 member companies nationwide.

“We’re going to position ourselves to drive a better costs of goods, which means we have to continue to find ways to become more efficient and more transparent to our customers,” he adds.