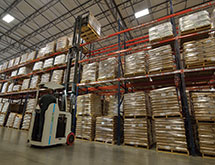 After more than three decades, Batory Foods Inc. has established a broad reach in the food industry. “We’re a tier one ingredient supplier to manufacturers,” Vice President of Operations and Information Technology Fred Dingraudo says. “If you looked at the markets we’re in, it’s everything from large food to ethnic food to bakeries.”

“His goal was to provide a single source for the basic food ingredients, [such as] sugar, oats, honey and corn syrup,” Dingraudo explains. Over time, Batory Foods has expanded its offering to include gums, preservatives, soluble fibers and emulsifiers, to name a few.

Through series of acquisitions between the mid-1990s and 2011, Batory Foods became a national distributor. Currently, Batory distributes more than 2,000 different ingredients to thousands of customers, including the leading manufacturers of bakery products, confections, beverages and dairy ingredients.

Batory Foods recently opened a new distribution facility in the greater Atlanta area. “The intent there was not just to expand our operations,” Dingraudo says. “We simply grew out of the space that we were in.”

Batory sought to create a new model of distribution for its organization, he says. Today, the facility spans approximately 235,000 square feet with 32-foot clear ceilings and complete allergen controls.

“We took it to a new level when we did this,” Dingraudo says. “We changed the efficiency of how the floor flowed, added better controls for food safety and we chose [a] crossed docked facility to pull through inventory.”

Batory Foods’ recent initiatives also included partnering with Holland, Mich.-based LeanLogistics, a provider of SaaS transportation management systems applications and supply chain services. “We did that because, at Batory, logistics is a very big part of our business,” he says.

Although the companies have worked together for a short time, “We’re already seeing tremendous results, Dingraudo reports. “What they’ve helped us to do really is to [have] better route guide adherence and spot optimization.

“They’ve had a focus on executive sponsorship from start to finish of this implementation,” he continues. “They’ve been unwavering in their support and commitment to making us successful.”

This has helped Batory Foods, whose logistics model includes rails, liquid tankers and intermodal freight transport. “LeanLogistics has gotten us to more effectively serve the needs of our customer base,” Dingraudo says.

Batory Foods is a people-focused organization, Dingraudo asserts. “There are advantages of being family owned. We have the ability to think long-term (versus quarterly) and it is our goal to be the best place to work in the industry,” he says.

The company has earned employee loyalty through training on many product lines and food types. “It’s a fast-moving, complex environment to learn about,” he says, noting that Batory Foods also trains on safety with the help of Lancaster Safety Consulting Inc.

“They do mock OSHA-inspections and help us set up our safety manual,” he says, adding that Batory Foods also has found success by giving incentives to its distribution center employees. “We’re focused on trying to be the best at what we do. We all win when that is achieved.”

Dingraudo has had a 37-year career in the food and automotive industries, including time at Leaf Confectionary and Kraft Foods. “The food industry is just a lot more fun and a lot more fascinating,” he declares.

After three years at Batory Foods, “I’m especially proud to be part of a management team that’s as good as this one is,” Dingraudo says. “We are equally focused on our customers as well as our suppliers. This company has a genuine understanding of meaningful partnerships and always wants to do the right thing.

“Our management team’s philosophy is about having a long-term, successful business,” he continues, noting that its “secret sauce” is its people. “We ask a lot of our folks and they rise to the challenges that face them each day. We have fun too, which is why we feel it is possible to become the best place to work in the food industry. Everybody makes this place a success.”

Batory Foods plans to continue business as usual, Dingraudo says. “We feel that the strategies that we’ve put in place here have served Batory well,” he says, adding that these include staying ahead of the curve.

“[We’ll also] partner where it makes sense and continue to provide the best strategies where we can treat our suppliers as if they were our customers,” he says. “Building those relationships is key. We’re investing in those aspects of our business that are core and that will serve us best going forward.”