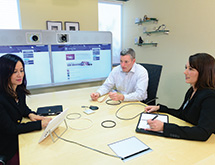 “Previously we were a sales-driven leadership team,” Stueber explains. “We are now challenging those assumptions to create a team made up of both operations and sales leaders to change the way we behave or the way we work. In our current team meetings, members feel empowered to challenge assumptions or ask clarifying questions so that they understand the expectations. Due to this clarity, they are better able to adjust their process or provide an improved solution.”

Collaboration is also a key component of the company’s strategy. “Greene, Tweed & Co. has a product-differentiation strategy whereby we provide strong material science knowledge in support of our application knowledge for the industries we serve,” Stueber explains. The company relies on collaboration between functions, suppliers and customers to effectively execute the strategy, he says.

Simply put, Greene, Tweed is built on the understanding that “a better view of the customer as well as their business models and processes is critically important,” Stueber adds. “I’ve tried to bring that to the surface.”

Greene, Tweed is a leader in the design and manufacture of high-performance materials and engineered components for the aerospace, oilfield, petrochemical and power, semiconductor and solar industries. The company also develops solutions for companies in the industrial and medical markets. “We go into the harsh environments,” Stueber says. “That’s what we’re here for.”

One way Greene, Tweed has answered that question is by expanding its facilities to provide local response on a global scale. The company has manufacturing facilities throughout the world including the United States, England and Asia. It also expanded its research and development teams with the addition of an advanced technology team in Pennsylvania, a composites research team in Switzerland and an elastomeric compounding team in Asia, he says. The company maintains several sales and engineering offices throughout the world including in France, Germany, Korea and Japan. Its products are sold and distributed worldwide.

Greene, Tweed has distinguished its business approach by improving communications and developing efficiencies and productivity with clients and partners alike, Stueber says.

Indeed, enhanced connectivity with customers is of utmost importance to the 153-year-old company that started as a distributor of hardware and mill supplies. “Through strategic partnerships, we regularly collaborate with our customers to expand the limits of their technology,” he says.

Greene, Tweed also has endeavored to improve its supply chain. “We have undertaken several initiatives – from basic Six Sigma to lean thinking to risk-mitigation planning – which have become the foundation for our continuous improvement philosophy,” Stueber says. The initiatives have led to further steps designed to improve the organization.

“These initial efforts have culminated into teams institutionalizing system or process thinking throughout the operations organization as the teams or individuals apply the learning cycle,” Stueber explains. “They can more accurately improve the system or process that produced the results.”

Greene, Tweed’s supply chain has evolved as part of a changing business strategy, says Kim Wagner, supply chain manager. For example, the supply chain is fully integrated with both the product development and technology teams, she notes. The company also works closely with suppliers throughout the process. “It’s definitely a more in-depth process,” she says. “We work with suppliers to get quicker, faster responses. We’re always watching our suppliers’ backs.” Additionally, Greene, Tweed works with a “tight group of suppliers” it can rely on, she says.

Stueber agrees that collaboration with clients and partners alike leads to improvements throughout the supply chain. “We work closely with our customers, and we are just as open to sit with our strategic partners to discuss and discover better solutions,” he says. “These solutions can be determined at the application-design level or trace back into the material science development.”

Brian Hughes, sales and operations planning manager, says that having a better sense of customers’ demands are a key to Greene, Tweed’s success. “We work with customers to align Greene, Tweed’s process to their process and metrics,” Hughes says. “What’s driving the buying patterns?” Hughes adds that Greene, Tweed has improved its planning process by building flexibility and agility into the system.

Greene, Tweed started in 1863 as a wholesaler of hardware and mill supplies. Today, it relies on its comprehensive technical expertise to solve critical industry challenges. The company says it leverages expertise in a variety of markets and products to offer solutions that meet performance challenges and reduce total cost of operation. These solutions include engineering thermoplastics, sealing systems and thermoplastic composites.

Innovation has long been at the forefront of Greene, Tweed’s strategy. In 1946, it developed G-T ring sealing solutions. The design soon became standard in a majority of the world’s aircraft, including the Boeing 747 jumbo jet and the supersonic Concord. In the 1980s, Greene, Tweed developed Chemraz elastomers and Arlon and Avalon thermoplastics, which opened up new opportunities in petrochemical, power, oilfield and semiconductor industries.

In 1990, Greene, Tweed became the first company in the world to offer cleanroom manufacturing of semiconductor sealing solutions, minimizing harmful contaminants for the industry’s critical applications. The company also invented the Seal-Connect electrical connectors for improved data flow in downhole tools used in the oil industry.

In the 2000s, Greene, Tweed expanded its international presence by opening offices in the Netherlands, Italy, Korea, Israel and Taiwan, as well as engineering and R&D facilities in Switzerland and Japan. The company also introduced new technologies, including Xycomp®, a high- performance thermoplastic composite featuring the toughness of metal at a fraction of its weight.

Greene, Tweed has already experienced several advances in technology and strategic initiatives during the current decade. Most recently, the company launched Arlon® 3000XT, a high-pressure, high-temperature thermoplastic designed to increase reliability of components in extreme environments in oilfield and aerospace applications.