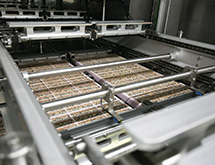 There was a time in Mark Dady’s career when he wanted to switch to sales so he could see the impact he was making on weekly and quarterly revenue statements. But sticking with procurement turned out to be the right choice for the chief procurement officer of snack food giant Mondelēz International. In less than two years, Dady has overseen the transformation of procurement into a unified operation that visibly impacts the company’s growth and bottom line.

Mondelēz formed in October 2012 after Kraft Foods split off its snack brands into a new company to encourage growth. For the past three years, Dady says Mondelēz has been flexing its independence to discover what it is and is not capable of. “We are committed to being the global snacking powerhouse,” he adds. “Our dream is to create delicious moments of joy.”

Although it is a relatively new company, the separation from Kraft left Mondelēz with a collection of beloved, leading global brands such as Oreo, Cadbury, Ritz and Trident. The company is the No. 1 chocolates and biscuits company and the No. 2 gum maker in the world, according to Dady. Mondelēz offers a variety of products in five major categories: biscuits, chocolate, gum and candy, beverages and cheese and grocery.

As Mondelēz refined its organizational structure, the company looked to adjust its procurement strategy to become one of the foundations of its transformation. Mondelēz International’s leadership believed the company had good growth potential, but realized its margins were not competitive with rivals such as Hershey, Nestlè and Mars. Improving its margins would enable the company to develop a virtuous cycle of investing in growth and expanding margins further. “We were very deliberate in focusing first on getting our margins to a particular point,” Dady says.

To achieve that goal, Mondelēz decided its procurement operation would own and source 100 percent of its $20 billion spend on everything from cocoa and packaging to insurance, consultants and sponsorships. “There was an appetite to leverage scale,” Dady explains.

Mondelēz regards procurement as a discipline in its own right, not just as a function of the finance department. “We want to be the best procurement function out there,” he adds. “In many ways, there’s no excuse not to deliver on that ambition.” Many of Dady’s peers at other companies can spend their entire careers trying to get a seat at the table with business owners and budget managers, but Mondelēz has embraced procurement as a vital part of its strategy. “With our model and with the foundational building block of procurement owning and managing 100 percent [of spend], the challenge wasn’t getting a seat at the table, but to jump on the table and dance a jig,” Dady says.

Since taking over as chief procurement officer in July 2014, Dady has reorganized the division. About 90 percent of the company’s 1,000 procurement employees have had their roles adjusted and report to new supervisors to streamline the process. Dady likens the overhaul to open heart surgery. “We wanted to very rapidly move from generalists toward a team that was more specialists,” he says.

Prior to the restructuring, the procurement team was more locally centric. Redefining those roles allowed the organization to widen its scope, Dady says. In doing so, Mondelēz won’t neglect its local needs, but will be in better position to source them more efficiently (e.g., packaging). “We don’t think of ourselves as ‘global’ necessarily – in fact, I’ve tried to banish that word – but we are for the first time globally wired,” Dady explains.

Because the company has a presence in nearly every grocery market on earth, changing the way it thought about procurement required an efficient plan.

Employees were divided into five parts of one larger team. Category leaders must understand the needs of every product in every Regional business working hand in hand with the business Presidents and also then with Procurement’s sourcing team to obtain whatever resources are necessary for a brand.

The company’s five sourcing teams drive value with suppliers for items such as packaging, raw materials, manufacturing and marketing. An operations team handles all the transactional and repeatable work, some of which is outsourced to Accenture. Mondelēz International’s risk managers work closely with the finance department to conduct hedging actions on commodities. Finally, the strategy and capability division develops the process and technology road map for the other four parts of the procurement group.

The five-part procurement model was developed early on in Mondelēz International’s plan to restructure the department. The company began the process by studying external benchmarks to investigate how other companies solved similar procurement dilemmas. That data enabled Mondelēz to develop its own procurement strategy to facilitate the transfer of best practices and leverage scale.

The resulting strategy is a move away from the idea of “global,” but replaces it with a philosophy of unification. Dady calls the concept “Pangaea” from the primal supercontinent that all modern continents broke off from. “We do not want to lose sight of our customers and the P&L that we serve,” Dady says. “But the bigger point is that we act as one fully integrated team, with no seas or oceans getting in the way of scale leverage or best practice sharing.”

Keying in on Growth

In building the best procurement department in the snacking world, Dady is quick to point out that “best” doesn’t mean best at any cost. Having a procurement function is an investment by Mondelēz, he explains, and the group owes the business a return on that investment. “When you have an ROI mentality, that’s when this whole Pangaea concept becomes more interesting.”

Although Mondelēz is still implementing its procurement strategy, Dady says the company is already seeing results. For the first time in 2015, the procurement group was able to deliver more than 5 percent total gross savings, equivalent to more than a billion dollars. Much of that progress can be credited to the new collaboration models it works within to partner with all other parts of the business, and progress against its goal to halve its 100,000 supplier count.

Dady says he wants to go even further by narrowing its contracts down to a few star suppliers in each particular space. Already, Mondelēz International has found some manufacturers willing to invest in their own capabilities to take on production of certain Tier II regional brands, allowing Mondelēz International to free up capacity at its own facilities so that it can continue to grow its Tier I global power brands. “What we’re looking for are a few sustainable, transformational, advantaged relationships,” Dady says, recalling the STAR acronym.

Those transformational relationships will become even more important as Mondelēz International builds its vision of the future supply chain. As forward-thinking companies such as Uber have disrupted the transportation industrial, Dady believes digital technologies will shape procurement. Choosing contracts will be like perusing a virtual mall. Sourcing managers will browse a database of competing approved vendors, picking an office supplier or a janitorial service from variety of storefronts.

Dady’s vision is only possible because of how his team has embraced its restructuring and the company’s mission to manage 100 percent of its spend. “We’re learning to play a whole new sport and we’re moving at the speed of light to become a global snacking powerhouse,” he says.