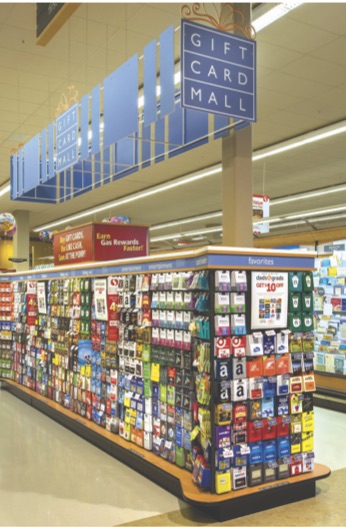 Consumers can walk into almost any U.S. grocery store and many other non-U.S. markets around the world and find a wall of gift cards for iTunes, Amazon, Kohl’s and more. When they pick a gift card out and purchase it at the register, the card is most likely activated on the Blackhawk Network platform.
“Not only do we physically distribute those cards, but we have the technology that facilitates the activation of the card so that when a consumer buys a $15 gift card, the card is activated in seconds and capable of being redeemed,” says Patrick Maiorano, vice president of supply chain and procurement at Blackhawk Network.

Blackhawk Network’s core business is prepaid gift cards, but it also provides prepaid digital products, prepaid telecom products and financial service products via a global distribution network. Blackhawk Network refers to the stores that sell its cards as distribution partners, whereas the brands on the cards are its content providers. There are some partners that play both roles, having their cards distributed as well as distributing others’ cards, such as Kohl’s, Michaels and The Home Depot.
The company has a market share of more than 90 percent of grocers in the United States and operates in 24 countries around the world. Blackhawk Network has acquired eight companies since Q4 2013 that offer products and services in the incentives and rewards space. These companies offer prepaid cards as rewards, for example.
“You can cash in reward points for a cruise or buy a gift card,” Maiorano explains. “Also, there are employee rewards. When Joe Smith does a good job, he can accumulate points and use that to buy a gift card. It’s a growing space and we’re heavily invested. Retail is increasing, but incentives and rewards are a wide-open, green field.” 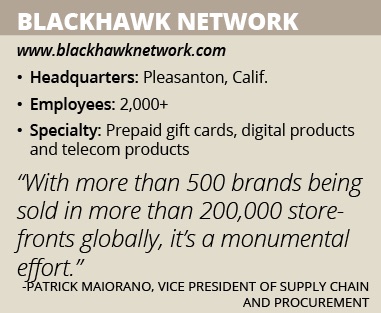 New Industry
Maiorano has always been involved with distribution and supply chains, but the prepaid card industry was a new field for him and fairly new for retailers and distributors in general. He joined Blackhawk Network in 2009 as senior director of distribution and supply chain, eventually rising to his current position, along with overseeing direct-to-consumer and B2B distribution.
“It began as a way to drive incremental revenue from a marketing perspective,” Maiorano says. “When I arrived in 2009, the company and the industry had been growing rapidly. Blackhawk Network was challenged to find a more effective means of distributing products and controlling costs. I was brought in to manage costs, improve distribution and improve customer satisfaction.”
The first step was normalizing the supply chain practices. For example, at the time, a content provider had three different versions of a $25 card. So, when the third-party logistics warehousing company went to select the card to distribute, they could accidentally choose the wrong type due to a lack of proper SKUs or the need for improved RF technology.
“You don’t want the wrong product going out where customers try to activate and it doesn’t work and create a bad customer experience,” Maiorano notes. Blackhawk Network solved the challenge by giving every card type specific SKUs, scanning and performing at least the standard quality assurance processes and ensuring that the third-parties use RF technology and industry best practices.
The next major thing Maiorano tackled was the amount of money the company spent on distribution. He was able to measure down to each individual card what Blackhawk Network was spending and found that 30 percent of the freight budget was being spent on expedited freight, which is defined as anything other than ground distribution. Through his years in the industry, Maiorano developed the theory that “every time you spend money on expedited freight, it’s a defect,” because it meant Blackhawk Network was spending extra money to fix the planning and/or lifecycle of the order.
Some of the problems he and his team found were unplanned promotions, sudden out-of-stock items and unexpected customer demand. “This was a first-level analysis, but you have to keep drilling until you hit bedrock to find out what’s creating these problems,” Maiorano explains. “Most companies will plan for a reseller level, but we plan down to the product and placement level where these cards are hanging. We have millions and millions of pegs in the United States alone.
“Every peg represents a card version, then we distribute direct to stores,” he continues. “In the planning process you have to tell a card partner, ‘Here’s the product we need for the next six months,’ and you have to get very detailed to pull that information. A lot of planning goes into that effort and we’ve improved that over time with fewer out-of-stocks.”
Thanks to the team’s dedication, Blackhawk Network’s expedited freight only amounts to about 1.5 percent of the freight spend now. This number exceeds world-class expectations for the amount of money the company spends on freight, according to Maiorano. “Every time you expedite something, you didn’t plan correctly,” he says. “You can’t get it to zero, but I’m pleased at how low we’ve been able to do it. We’ve reduced it and maintained good customer satisfaction both internal and externally with only a few out-of-stocks.”
As Blackhawk Network continues testing the waters of this fairly new and ever-changing industry, it will continue to optimize its systems and utilize the new technology available for the supply-and-demand space. It creates its own algorithms so it can more quickly acquire the necessary data for faster planning and efficient distribution.
“With more than 500 brands, millions of pegs and more than 200,000 storefronts globally, it’s a monumental effort,” Maiorano says. “My team deserves all the credit for all the hard work and innovation they do.”