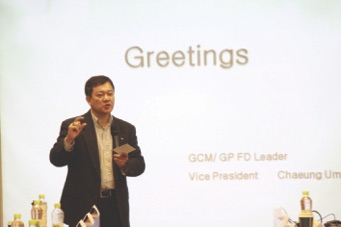 LG Electronics has been focused on becoming a more strategic supply chain and procurement organization. By Chris Petersen

Trying to affect change across a global company with more than 77,000 employees worldwide can be as complex a task as a military campaign. Fortunately, LG Electronics Corporate Vice President of Global Procurement Strategy and General Procurement Chae-Ung Um has the military background to go with his lifelong interest in analytics and supply chain operations.

He says the skill sets he learned at the United States Military Academy at West Point and in the U.S. Army have served him well as he has worked to help the global electronics giant enhance its supply chain and procurement operations. “I’m the kind of person where once I get my mind set, that’s what I’m going to do,” Um says.

After excelling in math and analytics in school, Um enlisted in the Army initially in 1983. Through luck and hard work he was nominated and accepted to West Point. He became an officer in 1989 and his first assignment was in Korea as a Field Artillery Officer and a secondary job as a Supply Officer. After deciding to move into the private sector, Um took different positions with leaders like Pfizer, GE, Praxair Inc., and Westinghouse & Co., working in the United States as well as Australia, Singapore, Japan, Belgium and Germany.

Everywhere he went, Um says, he learned something new about procurement and supply chain, and he came to relish the opportunity to influence supply chain operations to get the most value out of them. Creating a win-win situation for all parties along the supply chain is Um’s primary goal as a supply chain professional, he says.

After spending many years helping companies around the world create those win-win situations, Um received an opportunity that he could not refuse. “Lo and behold, back in 2008, LG was trying to become more global and more modernized, and they wanted to become a more advanced procurement organization,” Um says.

Today, Um is in charge of nearly $11 billion in annual spending for the general procurement areas and is also influencing more than $30 billion procurement spending for direct materials for the Seoul, South Korea-based electronics giant. By affecting a major cultural change throughout the entire organization, Um says, his task has not been an easy one, but the results LG has seen so far indicate that the journey has been worthwhile. 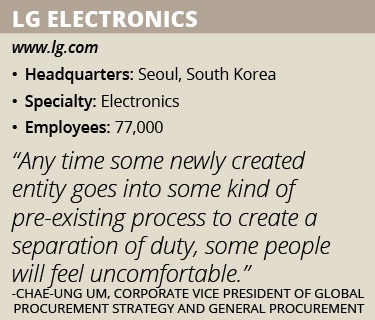 On joining LG, Um was in the position of helping LG transition to a general procurement model that subsumed procurement activities under a single department rather than delegating procurement for individual divisions to those divisions. Although the idea at first encountered resistance within the company, Um says he and his team were able to deliver some quick wins very early in the process. “We were taking away some of their pie,” Um says. “Any time some newly created entity goes into some kind of pre-existing process to create a separation of duty, some people feel uncomfortable.” Providing successful examples created a different point of view about the transition that helped change the minds of skeptics within the company. Of course, the success of the program was only possible due to the insight of the highest-level executives, CEO Mr. Bon Joon Koo and President/CFO Do Hyun Jung, who both recognized the value of such change and fully supported the swift and effective implementation of the transition.

Having the complete buy-in from all decision-makers in each division and department is crucial for general procurement, according to Um. This is because general procurement is based on the overall scope of work within an organization, rather than purchasing based on the needs of an individual business unit. Um says this was a difficult obstacle to overcome at first because many business units within LG operated under the belief that if they did not spend their entire allocated budget within the year, they would find their budgets reduced the following year.

Under the general procurement model, however, those concerns are taken out of the individual business units’ hands, and Um says part of his task was to demonstrate to them the benefits of having the savings reinvested in the company. To help communicate this message, Um and his team turned to LG’s marketing department to bring that message to the heads of each business unit and put it in terms they would understand. Transparency has been another critical aspect of Um’s efforts, and he says a major reason for the initiative’s success internally was his team’s ability to demonstrate clear financial stewardship.

Procurement strategy and general procurement is part of LG’s larger strategy to make its supply chain operations more strategic, Um says. The 2011 tsunami that ravaged Japan revealed that many of the company’s contingency plans had much needed room for improvement, he says. But now, under the leadership of CPO/SVP Si Yong Lee, the company has been reorganized such that the 2015 earthquake that hit Japan had much less impact on procurement. Mr. Lee’s risk mitigation plan included a swift assessment of the earthquake’s impact on its suppliers’ facilities and operations, utilization of the safety stock, which was strategically purchased in advance, and effective communication between those in the field and with the top management for urgent decision making. Mr. Lee’s risk mitigation initiative for LG is not limited to emergency plans. Mr. Lee and Um, with the full support from Do Hyun Jung, the President/CFO, have undertaken extensive risk management with regards to contracts in order to reduce the company’s exposure to potential financial liability

As data and analytics become much more important to procurement and supply chain operations, Um says LG and other global leaders will have to become more process-driven and focus on developing influencing skills. Um says the business leaders of tomorrow will need to be able to sell management on their ideas because analytics and the speed of data will make it much more important to be able to make decisions quickly based on facts and not just on experience and intuition. “We cannot survive without that, and I think our business leaders understand that,” Um says.