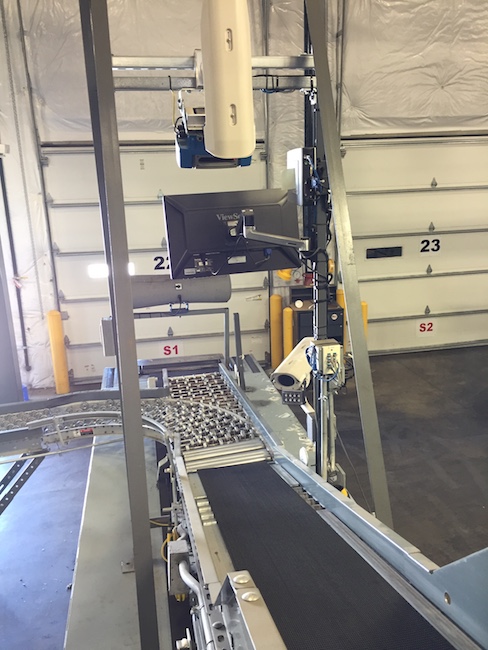 RNDC is underway with several projects to keep its business agile.
By Alan Dorich, Senior Editor at Knighthouse Media

Republic National Distributing Co. (RNDC) has a legacy that goes back to before Prohibition, but the company cannot be accused of resting on its laurels. Instead, the beverage alcohol distributor makes sure it stays current in the age of e-commerce and new routes to market.

“Everybody is looking for faster and more efficient ways to do things,” Vice President of Operations Steve Feldman says. “As the economy and markets change, we’ve got to continue to be more productive and optimize our facilities and equipment, and leverage new and innovative technology.”

RNDC was formed in 2007 from the merger of Republic Beverage Co. and National Distributing Co., which both had histories dating back to the early 1930s. Today, RNDC is one of the largest wholesale beverage alcohol distributors in the nation.

“Our customers are anybody with a license to sell alcoholic beverages,” Feldman says, noting that these range from grocery and liquor stores to restaurants and bars to bowling alleys. “Anybody that sells alcoholic beverages to an end customer has to buy it from a wholesaler.”

RNDC sells all types of alcoholic beverages, including spirits, wine and beer, servicing over 138,000 customers in 21 states and the District of Columbia, with annual sales of $7 billion.

RNDC is at work on several construction projects to enhance its 28 warehouses across the country. “We also are introducing new technology to try and fully optimize our facilities, maintain and improve levels of service, and do it faster and cheaper,” Feldman says.

The company had used an automated sorting system for many years in its locations. But recently, “We upgraded several with things like shuttle systems, utilization of voice technologies, labor management systems and advanced delivery and route optimization software,” he describes.

RNDC also is building a new facility in Michigan that will feature a buffer shuttle system that will house randomly picked orders, and automatically retrieve and merge them with the additional orders for processing and loading trucks. The company also is in the early stages of evaluating autonomous equipment such as floor scrubbing devices and truck loaders, Feldman adds. 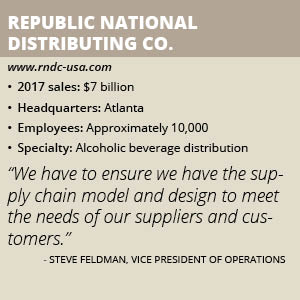 “We’ve also talked about things like self-driving trucks and autonomous vehicles,” he says. “There’s a small niche that it may work in [within] our industry, and we are exploring all innovative opportunities.”

Like many, RNDC is coping with shortage of drivers in its industry. “That affects the inbound side of things,” Feldman admits. “Getting products from our suppliers to our warehouses is becoming more and more challenging and more expensive.

“It’s been challenging in the last year to maintain appropriate staffing levels and provide the high level of service our customers are used to from RNDC, with the shortage of drivers,” he continues, noting that the company has multiple initiatives to help it increase its talent pool.

These include a tuition reimbursement program, along with another that provides financial support to associates who want to earn their commercial driver’s license. RNDC also is utilizing “third-party companies that specialize in recruiting and hiring drivers,” Feldman says.

The company also strives to be more diverse in its recruiting, including looking at female candidates. “We go as deep as we can into the pool for talent,” he says.

RNDC also is investigating more ways to retain workers by offering them benefits from a work-life balance perspective. “We’re continuously looking at all of those things, [which will] translate to the ability to recruit and retain talent,” Feldman says. “Offering a four-day work week, for example, is a big draw when it comes to attracting and retaining top talent.”

RNDC maintains strong relationships with several of the largest suppliers in the world, which is critical to the company’s inventory management efforts. “The suppliers that we represent are the cornerstone of our success,” Feldman says.

“We have to ensure we have the inventory to serve our customers, and meet supplier expectations,” he continues, adding that the company maintains these relationships by being transparent in terms of its analytics and data.

“We want to make sure we have appropriate days on hand while minimizing out of stocks and back orders,” Feldman says. RNDC hopes to further minimize this by collaborating more with its suppliers, including programs such as vendor-managed inventories.

“We’re hoping that’s going to have some positive impact on our inventory levels,” he explains, adding that preventing overbuying is an area of focus as well. “We’re doing some things in collaboration with many of our suppliers to try to optimize that.”

Feldman joined National Distributing Co. in 1984 and stayed with the company through the merger that created RNDC. “It’s the only company I’ve ever worked for,” he says. “I was hired as a management trainee right out of college.”

He is proud of how RNDC has grown for the last 12 years. “We’ve managed to expand facilities, build new facilities and keep up with the growth,” he says. “Since 1992, we’ve had 11 integrations of acquisitions or joint ventures, executed 13 facility moves, and constructed nine new buildings.”

The company also had seven building expansions. “So [we’ve had] a great deal of activity and growth in a pretty short period of time,” he says. “We’re pretty proud of what we have been able to accomplish to keep up with our growth.”

RNDC plans for more growth as it adds more buildings and technology to expand its business and gain more supplier brands. “The focus on productivity utilization and analytics is going to continue to be the driver of success going forward,” he predicts.

“This team stewards responsibility for analyzing and interpreting customer insights, then transferring that intellectual capital to our state, channel and supplier teams with the intent to ideate and create programming awareness for RNDC’s customer and supplier partners,” it says, adding that its offerings include consumer insights, multicultural marketing, program development, traditional/digital media support, and creative/graphic design and production.