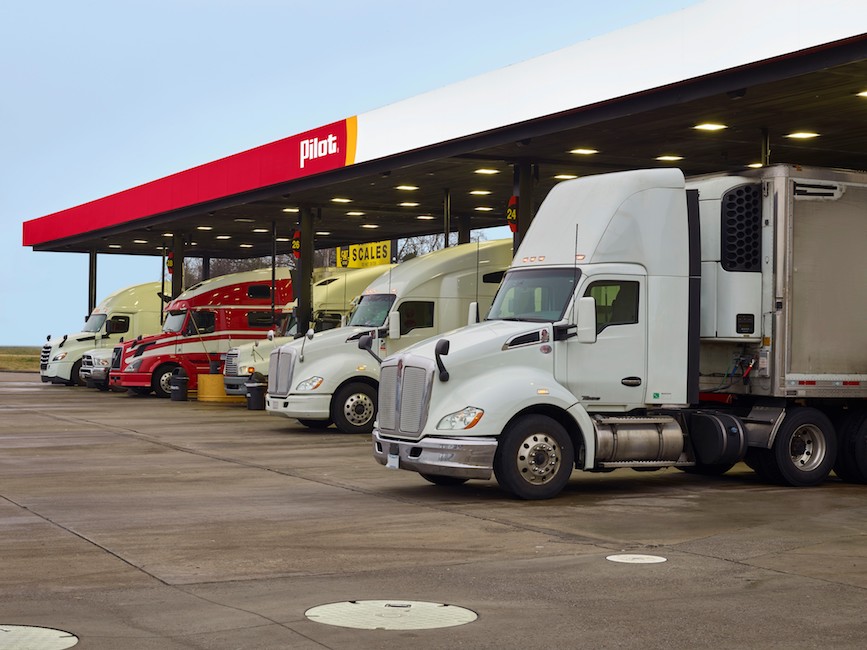 Pilot Flying J’s logistics operations ensure that its truck driver and other customers get the fuel they need.
By Jim Harris, Senior Editor at Knighthouse Publishing

Pilot Flying J is building on one of its greatest strengths. “Our logistics network is what sets us apart from our competition,” says Brad Jenkins, senior vice president of supply and distribution for the travel center operator. “We’ve always been very good at running the ‘last mile’ utilizing our central dispatch operation, and we want to scale those capabilities.”

Pilot Flying J receives petroleum from bulk distribution terminals that are fed by oil refineries and pipelines, as well as shipping product on pipelines directly. The company ships products to locations through its truck fleet and more than 300 third-party carriers as well as by barge and rail. 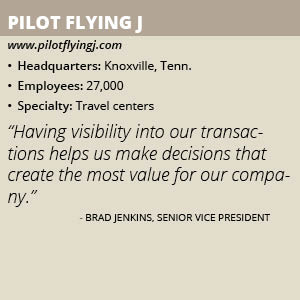 The company works with more than 350 different petroleum suppliers who ship products through many different pipelines that supply more than 400 terminals. “We receive more than 40,000 price feeds from different suppliers across the country that are integrated into a single system,” Jenkins says. “Using this system, we figure out the best way to source each travel center.

“In many cases there’s no guarantee the product will be there when we show up – it’s first-come, first-served, so if it’s not there, we move on,” he adds. “We find ourselves switching from one terminal to the next depending on what’s available and who has fuel.”

The company’s logistics team is linked closely with each of the company’s stores. “Our team knows what each store typically sells each day and can adjust accordingly based on increased or reduced demand in the area,” Jenkins says.

Pilot Flying J relies on technology to help it coordinate its purchasing and transportation activities. “We need technology to give us the visibility to make key decisions as we go through each day,” Jenkins says. “Having visibility into our transactions helps us make decisions that create the most value for our company.

Pilot Flying J’s upstream movements were traditionally tracked using spreadsheets because the company had only limited involvement in shipping products directly on the pipeline. “We are more involved in that now and have a team of people in Houston who optimize and purchase the bulk, which did not exist a year or two ago,” Jenkins adds. “We are trying to optimize our supply chain to the extent that we can, given pipeline and trucking capacity constraints.”

In addition to investing in technology, Pilot Flying J has made a number of other improvements to its supply chain operations during Jenkins’ six years with the company. “When I first arrived here, trucking and logistics were in one silo, supply was in another silo, and sales was in yet another silo,” he says. “We have now integrated these different functions and have aligned goals. Everyone now does the best thing to create value for the company and our customers.”

Pilot Flying J is the largest operator of travel centers in North America. The company is the top seller of over-the-road diesel fuel in the nation and one of the 40 largest private carriers in the country.

The company is the result of a 2010 partnership between Pilot Travel Centers LLC and Flying J Inc. The organization can trace its roots back to the late 1950s, when James Haslam II opened the first Pilot in Gate City, Va. In the late 1960s, Jay Call launched Flying J Inc. with four gas stations in Utah. By the turn of the century, Pilot and Marathon Oil entered into an agreement to form Pilot Travel Centers in 2001, while Flying J and Shell Canada joined to create a network of travel plazas, fuel stops and cardlock fueling systems.

When Pilot Travel Centers and Flying J merged to form Pilot Flying J in 2010, it brought two of the best-known brands in the travel center industry together. Today, Pilot Flying J features an expanded network of interstate travel centers and travel plazas across North America. Its focus is on superior customer service and enhancing food and service offerings for customers.

Pilot Flying J serves a variety of customers, including professional drivers, trucking companies, travelers passing through a town, local customers running in for a cup of coffee and RV customers. The company reaches out to guests in a number of ways, including its myPilot® mobile app, social media, in-store signage, interstate billboards, email marketing and customer surveys.

The company is constantly working to meet and exceed the needs of guests through fast, friendly and convenient locations. It bills its coffee as “the best coffee on the interstate,” and its PJ Fresh Marketplace concept features an expanded variety of food options that are fresh, healthy and quick. Other amenities offered by the company include a variety of dining options, WiFi connectivity, 5,200 deluxe showers, more than 6,200 diesel fuel lanes with 5,200 offering DEF at the pump and more than 72,000 parking spaces for trucks.

Jenkins says the company continues to find ways to improve its internal operations as well as its offerings to customers. “I’m proud of our willingness to embrace change,” he notes. “We understand that there is always room for continuous improvement in what do, and we continue to make investments in technology and people that will take us to the next level.”