Back to Profile Gallery > Gilead Sciences 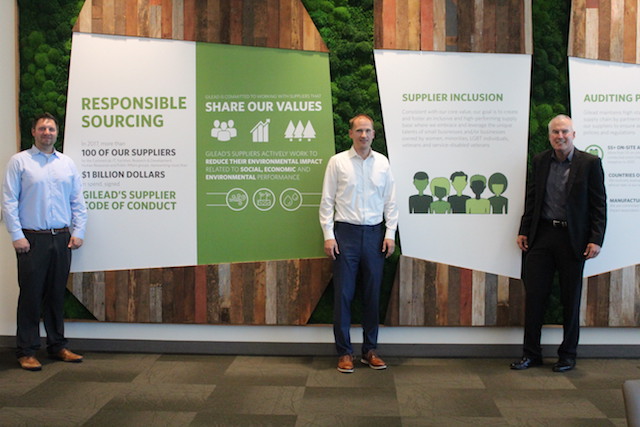 Gilead Sciences’ procurement division is developing a new roadmap for success and savings.

Andy Murray walked in with a mission and a vision. Although Gilead Sciences had a distinguished reputation in the research and development of pharmaceutical drugs used in the treatment of HIV, hepatitis B, hepatitis C and influenza, the company was lacking in procurement best practices.

The company’s savings lacked credibility and were not stakeholder validated. Many stakeholders didn’t even know what the company’s procurement and sourcing teams did. The  vision, mission and strategic direction were unclear. 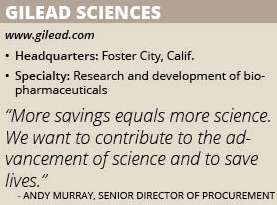 In fact, based on an independent third-party audit, Gilead was lagging behind in seven of the eight commonly accepted areas of procurement best practice.

“That means you’re not delivering the value that a company should receive from its procurement organization,” says Murray, who joined Gilead as its senior director of procurement in 2016.

With determination and passion propelling him forward, Murray set out on a mission to develop a new roadmap for Gilead – “to work with the business, for the business, to maximize the value for every dollar spent.”

Backed by his CFO, Robin Washington, who provided integral executive sponsorship, Murray started planting the seeds of change. In his first year of employment, Gilead’s newly formed strategic sourcing team saved the company $40 million. In 2017, the company’s goal was to increase that number to $70 million.

“Turns out, it was over $110 million,” Murray says. “I attribute that to the hard work of the team, not only connecting with the stakeholders, but listening to the stakeholders and understanding what we can do to tailor our solutions to what works for them.”

Many Gilead employees contributed to this success, especially those from the company’s information technology, facilities and commercial divisions.

As the team set out to create its new roadmap to success, it first had to align the company’s goals and objectives. It identified its six key drivers. They were: people, contractor optimization, responsible sourcing, cost improvement, business partnering and supplier relationship management. In 2017, a seventh key driver was added: process and technology.

“A lot of procurement organizations will tell you that a roadmap is very important but very few have one,” Murray says. “We’re working on that roadmap now. I think it will enable better decision making and support the strategic needs of Gilead.”

When it comes to cost improvement, Gilead’s team aligned with the company’s key stakeholders and defined cost improvement criteria. Moving forward, all projects must be validated in writing by stakeholders. The team also implemented capacity-based engagement thresholds for each of its functional areas.

According to its new roadmap, Gilead suppliers must align with the company’s core values and meet its financial and performance criteria to be qualified to do business with the company.

Gilead’s new supplier code of conduct calls for the inclusion of small and diverse suppliers, risk mitigation and performance and sustainability. It was published and distributed to Gilead’s top suppliers in 2017.

Among other mandates, it asks that they agree to the ethical treatment of their employees, avoid using child/slave labor, refrain from harming the environment and respect LGBTQ equality. The latter helped Gilead receive its first Human Rights Campaign score of 100 in 2017.

“Prior to this, Gilead had not yet formalized a responsible sourcing program and we had no supplier code,” Murray says. “It mitigates risk to the Gilead brand to make sure we are investing money with suppliers that perform ethically. This is in support of our core values and Gilead embraced this code whole-heartedly.”

Gilead has more than 15,000 suppliers. In the near future, the company plans to start evaluating its suppliers. “This means evaluating certain suppliers that don’t meet certain criteria and leverage our spend with those that meet those criteria. We’ll be rewarding those that are the most responsible suppliers.”

Gilead considers the advancement of technology critical to its operations. That’s why it’s developing a digital roadmap. “It’s a multi-year strategy to apply robotic process automation and artificial intelligence to do tactical type of work,” Murray says.

The objective for the plan includes plans for process digitization and automation, supporting technology solutions and budgeting options. It also seeks to validate viability of various next generation technologies and success stories with help from a robot-assisted central buy desk that Gilead plans to pilot next year.

In addition, the company implemented eSourcing software for competitive bidding this year. “In the past, we didn’t have the ability to electronically source or bid anything,” Murray says.

“We were doing through spreadsheets. Now we have implemented an electronic sourcing tool. On our digital journey, it’s one small step forward.”

Foster City, Calif.-based Gilead is a research-based biopharmaceutical company that discovers, develops and commercializes innovative medicines in areas of unmet medical need. The company strives to transform and simplify care for people with life-threatening illnesses around the world. It has operations in more than 35 countries worldwide.

The company’s portfolio of 24 marketed products contains a number of category firsts. They include complete treatment regimens for HIV and chronic hepatitis C infection available in once daily single pills.

It also includes Harvoni for chronic hepatitis C, which is a complete antiviral treatment regimen in a single tablet that provides high cure rates and a shortened course of therapy for many patients.

Gilead’s research and development effort includes several hundred ongoing and planned clinical studies evaluating compounds with the potential to become the next generation of effective medicines.

Gilead’s procurement team plays a major role in helping the company further expand its portfolio and make a difference.

“More savings equals more science,” Murrays says. “We want to contribute to the advancement of science and to save lives.”