Back to Profile Gallery > Nutra Manufacturing 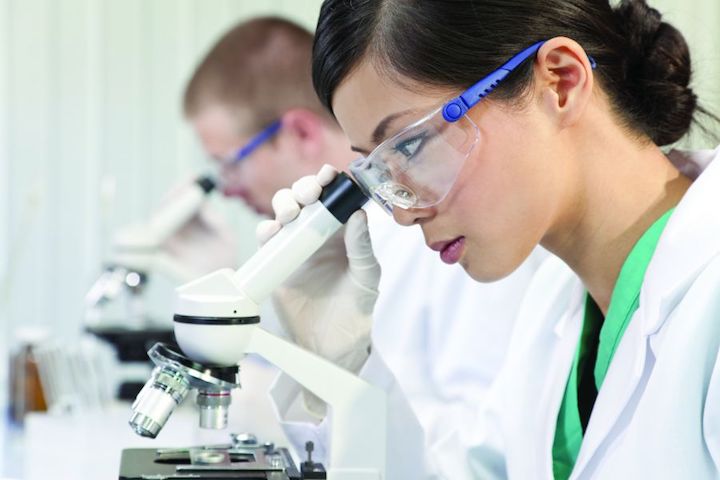 Integrity and win-win situations make for a successful supply chain at Nutra Manufacturing.

While there are other companies that manufacture dietary supplements, there are few that can produce tablets, capsules and soft gelatin or handle the volume that Nutra can. “We have the scale and we are already known in the industry, so we concentrate on being the best we can for our customers,” says Jill Warner, senior director of sourcing and procurement. “We manufacture for quality.” 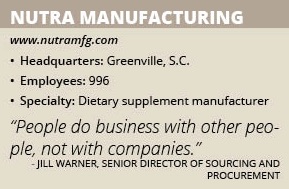 Until recently, Nutra was owned by General Nutrition Centers (GNC) and split its efforts between GNC and contract manufacturing. “Our purpose had been to manufacture for GNC and, if we had additional capacity, to use it for another entity,” Warner says.

In March, International Vitamin Corporation (IVC) became a majority owner of Nutra. Over time, Nutra will be fully owned and integrated into IVC.

Warner is pleased with being part of IVC. “IVC is known for its efficient supply chains,” Warner says. “They are integrated into a lot of different areas. It’s going to give us an opportunity to leverage their expansive supply chain.”

Warner previously worked at Perrigo and a division of Pfizer before joining Nutra in August 2016. “They hired me to help them with supply chain challenges at Nutra,” Warner recalls. “There on-time delivery was in the mid 50 percent range. By December I got it up to 84 percent and by February 2017, I had it up to 95 percent.”

On her second day at Nutra, Warner spoke to about 300 people representing more than 200 suppliers. “I told them what I expected and needed and that we would make sure we got the quality with the right specifications,” she says. “We would give them forecasting so they could deliver to us when we would need it. Whatever you have to do, you have to hit the lead time. When you give me a lead time, you have to keep it. It’s called integrity.”

Nutra grades its suppliers and offers them monthly feedback on their quality and on-time performance. The company also conducts yearly reviews. “If they don’t make a certain grade, we have to have a game plan to rectify that grade or they can be disqualified as a supplier to Nutra,” Warner says.

There are challenges. Many raw materials used in dietary supplements come from crops. “I don’t have control over mother nature,” Warner says. “If there is too much rain in Florida, there might not be a good Palmetto crop. Beetles or bugs or root rot, I could be dead in the water.”

To compensate, Nutra signs multi-year agreements with botanical suppliers to bring in more rare materials when crops are good, to make up for when crops are limited.

Just in time inventory. “It’s a constant race but one we are winning,” Warner says. “We don’t buy a tremendous number of things that are not already committed to because we are a custom manufacturer.”

For industry peers who handle supply chain, Warner says it is all about maintaining integrity. “My main advice is, keep your word,” Warner says. “When you commit to a supplier and they commit to you, you need to keep your word. Keep your word and that supplier will take care of you when trouble comes.”

The mold for the bottle was owned by a Florida shampoo company. “I had to personally call up the company and beg them to let me have some bottles and caps made,” Warner says. “I had to convince people in another industry to let me run the bottles now so I could make the customer launch. It goes back to fostering a win-win relationship.”

In recent years, Nutra instituted a reverse option process for buying items used in maintenance, repairs and operations. “Suppliers can bid against each other live,” Warner says. “That’s been successful with some substantial savings.”

The company is researching a new Enterprise Resource Planning (ERP) software. Nutra has instituted Electronic Data Interchange (EDI) for select suppliers. The company is also in the process of replacing its transportation company.

Warner is looking forward to Nutra integrating into IVC. “Their mission and values line up with ours,” she says. “We will be the largest provider in North America in the dietary supplement industry. We will be a force to be reckoned with. The future is bright.”