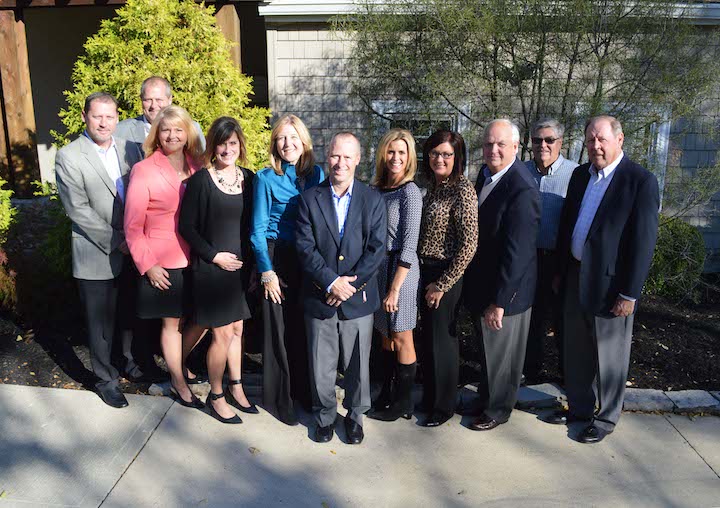 While other firms might have one direct salesperson, FG&C has a team of people including salespeople, marketing and consumer people. 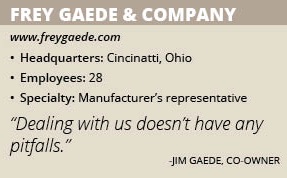 The company is quick to respond. “If someone needs something tomorrow or in the next few days and I can’t be there, we have other people that can jump in and fill the void pretty quickly,” co-owner John Frey says.

Another strength is ethics. “We’ve always done things the right way,” co-owner Jim Gaede says. “Dealing with us doesn’t have any pitfalls. We respond to customers if they have any issues. We put our egos at the back of the bus.”

Those ethics extend to the hiring of family. Arthur Frey, John’s grandfather, founded the business in 1948 and Jim Gaede joined in the 1970s. While the two families own the business, having the last name of Frey or Gaede does not guarantee a job. In fact, FG&C created hiring guidelines for family members. Among other requirements, a family applicant should have held a similar job at another company for at least a year, be a college graduate, selected in a competitive recruiting situation and undergo testing before a hiring decision is made.

FG&C can not only make sales for the manufacturers it represents but more importantly, the company can do it at a lower cost than the manufacturer can. FG&C has 19 sales representatives that cover 25 states. The company is managed by partners John Frey, Todd Gaede, Jim Gaede, Gary Brusa and Southeast Regional Sales Manager John Thompson.

“If a manufacturer were to hire their own direct people at a similar cost structure, they could put in four to five representatives and those representatives would be covering a broader geography with less consistent coverage,” Gaede says. “We see those customers more often and have deeper relationships with those customers. We spend more time with them and their ultimate end users.”

Frey agrees. “Do they really want to provide cars and health insurance for them just to represent one company?” Frey says. “Or have a manufacturers representatives like us that represent multiple manufacturers?”

While there are a number of regional manufacturer’s representatives around the United States, manufacturers trying to cover the entire country frequently would rather deal with a single entity. In 2012, Frey, Gaede, his son Todd Gaede and two other companies – one in the east and one in the west – formed Harbinger National. Harbinger will bring in national accounts and then dole out portions to the regional manufacturer representative groups that own Harbinger. “It enabled us to get into categories we hadn’t been in before,” Gaede says. “Such as Zoll defibrillators.”

To stay knowledgeable about the products it represents, FG&C representatives regularly attend sales meetings of manufacturers or take part in their webinars.

Twice a year, FG&C will bring in smaller manufactures to conduct trainings at one of FG&C’s sales meetings. FG&C also conducts training for their dealers. “They rely on us for training, product knowledge and overall support of what they are doing,” Todd Gaede says.

Within the company, representatives will sometimes ‘tag team.’ “If a particular representative is doing a good job with a product line from one of our manufacturers and a person in Chicago isn’t doing as well, often we will have those two work together to share best practices,” Gaede says.

The company’s service doesn’t stop with the order. FG&C will follow up with the manufacturer and client. A client, for example, may want to know the delivery date or an FG&C representative might help with issues such as a wrong item shipped or damage during delivery.

Over the years, FG&C has seen a trend of consolidation among its distributors. “The big are getting bigger,” Frey says. “Years ago, there were probably hardware stores on every corner. Now there is Home Depot and Lowes. The real strong independent dealers will acquire dealers in other markets. The scale required to be competitive in the marketplace has also become tougher.”

Many of the manufacturers FG&C represents are expanding into different categories. Likewise, FG&C has expanded its offerings in areas less impacted by technology such as furniture, advertising specialty, breakroom and safety items.

Which is not to say all traditional office products have disappeared. “We just heard of a distributor who buys a truckload of paper a day,” Gaede says. “There is still some shockingly big volumes on standard products.”

FG&C also works to sell products in the context of selling solutions. Take, for example, the wellness phenomenon. “The larger businesses realize that if employees are healthy, they will be more productive and costs will go down,” Frey says. “FG&C can sell adjustable office chairs, height-adjustable tables, monitor arms that keep a computer screen at the correct height and anti-fatigue mats as a solution to employee wellness.”