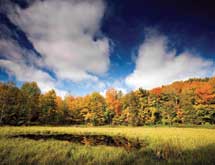 After nearly 25 years, Plum Creek has stayed successful by keeping close to its customers. “We work with them not only to deliver the correct quantity but also the type of products they need,” Tom Ray says. “We’re very attuned to what our customers [want].”

Ray is the vice president of northwest resources and manufacturing for the Seattle-based company, which specializes in lumber, plywood and medium-density fiberboard products. Plum Creek started operations as a master limited partnership in 1989.

Plum Creek serves a diverse customer base, which ranges from “a very small saw mill with just a few employees in the Northeast, to a large paper mill in the South where you would have hundreds of employees,” Ray says. “It could also be our own mills that we have in Montana.”

Plum Creek has timberlands in the northwest, northeast and southeast regions of the United States. After planting, “We’re able then to estimate the point of which those acres can be harvested,” Ray Says. “We know year-to-year what our capabilities are for supplying to the market.”

The firm also buys products from other suppliers. “We have a very reliable model [that allows us to] supply that timber into the market on a consistent basis,” he says.

Recently, Plum Creek implemented a supply chain system where it puts more products into its warehouses so it can provide small, just-in-time shipments to its customers in the Midwest. “[That] is a key marketplace for us,” he says.

For example, 45 percent of its medium-density fiberboard now goes through its warehousing system, Ray says. If a client needed one or two railcars of its products, Plum Creek will be able to fulfill that order. “It helps [the customers] out,” Ray says.

Ray has been in the forestry industry since 1981. His previous experience includes working at Georgia-Pacific where he managed timberlands for its timber division, The Timber Co. When the division merged with Plum Creek in 2001, Ray joined the company.

He adds that he is pleased with Plum Creek’s work environment. “It’s a great company that is employee-friendly and innovative,” Ray says.

Plum Creek operates in a cyclical industry and is seeing a comeback in the housing market, Ray notes. “We’re predicting demand of more than 1.5 million annual housing starts over time,” he says. “It’s becoming a more dynamic marketplace again and certainly moving into a more favorable business climate for us.

“Certainly, the next couple years look bright as we continue to see housing starts projected to grow,” he says. “The demographics for housing needs are very favorable.”­­­