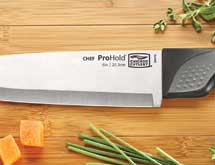 Because World Kitchen manufactures its famous Corelle®- and Pyrex®-branded products in Charleroi, Pa., and Corning, N.Y., warehousing and distributing those products in that region of the country made sense for the company.

World Kitchen now ships the products it manufactures in the East by piggyback truck on rail to its new West Coast facility, so all of the company’s brands are available in both distribution centers.

The company’s previous system was to warehouse the products that were manufactured in both Charleroi and Corning to Greencastle and ship them to retailers across the country, including west of the Rocky Mountains, while products sourced from Asia were shipped from a different distribution center in Illinois.

“When we talked to our customers, one of the improvements they wanted was one shipment with one invoice,” explains Michael Pietrowski, senior vice president of global product supply. With the new system, products manufactured in Corning and Greencastle as well as sourced products are shipped and kept in inventory at both the company’s existing distribution center in Greencastle, as well as the new distribution center in Riverside.

Canadian distribution is handled out of the company’s distribution centers, too. This has cut distribution time to World Kitchen’s retail customers in the western states by half.

“This provides great benefits to our customers, not only on invoicing, but also transit times,” Pietrowski points out. Those times have been reduced from seven to 10 days to one to three days, and fill rates have been improved to up to 99 percent.

A complicating factor was that many of the company’s manufactured products are sold mixed in sets. Mixed sets are assembled in Greencastle at the distribution center just-in-time – approximately one week before shipment to retailers – before being put in inventory in both distribution centers. About 30 percent of Greencastle’s volume is then shipped by trucks piggybacked on rail cars to the Riverside distribution center. “We ship trucks daily from Greencastle to Riverside, but it’s about 10 days transit,” Pietrowski estimates.

Made in the USA

World Kitchen LLC’s Corelle products are manufactured in Corning, while its Pyrex brand of glassware is made in Charleroi. Because both Corelle and Pyrex products are made of glass, the primary raw material – sand – and other materials are shipped to those manufacturing facilities mostly by rail and stored for approximately 12 days before use.

At the Corning plant, for example, 200,000 pounds of glass – one day’s supply for production of Corelle – is melted in a tank 26 feet deep. In addition to distribution throughout North America, approximately 30 percent of the company’s products manufactured in Corning are sent to the Asia-Pacific region.

Snapware®-branded storage products – primarily plastic – are manufactured in Mira Loma, Calif. Plastic resin is transported in bulk by trucks, and enough for 12 days of production is stored in onsite silos. The Riverside distribution center keeps approximately 30 days of finished products in stock.

World Kitchen’s Chicago Cutlery®, Corningware® and Baker’s Secret® products are sourced from Asia. The company also has a decorating facility in Malaysia. Consumers probably aren’t aware that the decorative designs placed on the company’s products such as Corelle are different in some countries.

“The designs that we sell in Asia tend to be much more involved and sophisticated for the requirements of that consumer shopping at the premium department stores,” points out Kris Malkoski, president for North America.

With the second warehouse in California, World Kitchen is using a software module for distribution resource planning. “Our focus is on getting the forecast right and making sure we get the right supply in the right location,” Pietrowski says.

“We utilize the consensus forecasting process, which has helped improve our accuracy,” Malkoski adds. “We really focus on keeping the inventory level low, so that we’re not being inefficient in our order processing.” The company achieves 75 percent accuracy of its forecasts on a 90-day lookback, Pietrowski says.

Pietrowski attributes the success of World Kitchen’s supply chain efforts to the software expertise of his employees. “They’re great people,” he says. “They really understand the processes and that system, and they leverage it. We really have a well-trained and developed and highly engaged workforce that understands their roles and leverages the tools that they utilize.”

Those supply chain best practices and software expertise are being transferred to World Kitchen’s offices in Asia, which is the company’s fastest growing market. “We’re taking those tools, training people, leveraging the tools and then coming back and making sure they deliver the right inventory at the right time to satisfy our customers,” Pietrowski says.

World Kitchen has supply chain employees in China, India and South Korea, which is its most mature foreign market. Third-party logistics providers are used in those countries. Corelle is positioned in South Korea and China as a higher-end product in department stores. “In India, they love the Corelle product, but it’s positioned very high in department store offerings,” Pietrowski says. “Corelle is the No. 1 housewares brand in South Korea. We’ve been there 20 years.” ­­­