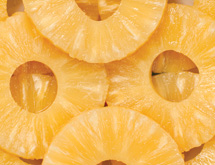 When people eat fruit or veg- etables, most often they prefer them to be fresh and flavorful, and not soiled by the effects of time. Dole Fresh Vegetables Inc. gives consumers this positive experience through its work.

Based in Monterey, Calif., the company produces and markets fresh fruits, vegetables and flowers, and offers salads and frozen fruits. It was incorporated in 1983 and originally named Castle & Cooke Fresh Vegetables Inc., before taking its current name in 1990.

Dole Fresh Vegetables is a subsidiary of the renowned Dole Food Co. Inc., which has a long history in the produce industry. In 1899, James Dole started the Westlake Village, Calif.-based company when he came to Hawaii with a Harvard degree in business and horticulture.

Initially, Dole grew pineapples. “After harvesting the world’s sweetest, juiciest pineapples, he started shipping them back to mainland U.S.A.,” the company says.

So that more people could enjoy the pineapples, Dole developed a technique for canning them. “He wanted to make the sunshine and taste of Hawaiian pineapples available for everyone,” it says.

Nearly 50 years ago, Dole’s canned pineapple was made available to Europe. The company followed this with bananas as it developed its fresh fruit range, and added ripening and distribution facilities.

The hard work paid off. Dole says it is now the world’s largest producer, distributor and marketer of fresh fruit and vegetables. “We are experts,” the company says. “It’s what we do and we take great care to see that we do it well.

“Today, we import a wide range of fresh fruit and vegetables from both our own farms and some 7,000 independent growers located all over the world,” Dole says. “And our Packaged Foods business provides [consumers] with a growing line of innovative products, allowing [them] to enjoy fruit in more convenient formats.”

Dole says it is committed to sustainability to protect its greatest assets: people, farms and the environment. According to the company, it has built this strategy on four pillars: water management, carbon footprint, soil conservation and packaging.

“Water management, which includes using water responsibly and efficiently, as well as protecting the world’s limited freshwater supply, is a matter that requires immediate attention,” it says. “Knowing water’s importance across every facet of life, Dole has implemented industry-leading programs that teach water recycling methods and processes to reduce overall usage.”

Additionally, the world’s carbon footprint is a crucial issue, Dole says. “Dole works actively to measure, reduce and eventually offset a portion of its greenhouse gas emissions, which in turn, will diminish its contribution to global warming,” it says.

In regards to soil conservation, healthy soils are needed for growing healthy products, Dole says. But, it notes that soil often faces the risk of degradation by erosion, salinity, contamination and other results of mismanagement. “Dole has long been active in protecting soils through alternative practices that aim to prevent and limit soil erosion,” it says.

However, “Environmental externalities don’t stop at the end of a production line, and neither do Dole’s actions,” the company says, noting that it offers food that is responsibly managed from the early stages of growth to the final preparations. “The company’s efforts concentrate not only on the amount of packaging used in marketing and selling products to consumers, but also on all materials employed in the supply chain.”

Dole also measures its performance and is transitioning to a global IT tool that collects sustainability indicators from its divisions.

“These indicators will include several parameters and environmental sustainability factors, such as use of fertilizers, consumption of water and consumption of energy – particularly fuel and electricity – to name a few,” it says.

Additionally, so it can measure the environmental impact of its bananas produced in Costa Rica and distributed in Norway, Dole is taking part in an initiative led by Norwegian research institute Østfoldforskning. According to the company, this is based on a lifecycle assessment approach and reveals impacts beyond greenhouse gas emissions.