Back to Profile Gallery > Kiva Systems 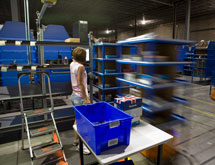 Woburn, Mass.-based solutions provider Kiva Systems has developed innovative technology that’s brought automated order fulfillment to a whole new level for retail merchandisers. CEO Mick Mountz, who founded the company in 2003, said that from the beginning, the team at Kiva has been wholly focused on solving the supply chain issues of retail merchandisers.

Prior to the company’s inception, Mountz experienced these sort of issues first hand while working for Webvan, a Web-based grocer. Fed up with the process and confident in his ability to find an answer, he began to brainstorm. “I wanted to find a way to make the products come to me, rather than me going out to get each one I needed for an order,” he said.

Mountz sought the help of Peter Wurman and Raffaello D’Andrea, both of whom had experience developing and working with complex, multi-agent systems. Immediately after that, the trio began developing what would become the first Kiva system. The company has grown significantly since that time (it now employs 120), but its founding vision continues to drive all aspects of operation.

The company applies the concepts of distributed intelligence to order fulfillment and inventory management using break- through material handling systems and order fulfillment software. Inspired by ant colonies capable of performing large and complex tasks with limited central control, the Kiva system allows inventory to organize itself, adapting to conditions as they change. The resulting solution combines store, move, and sort functions into one simple system that can deliver any item to any operator at any time.

“We have developed a novel approach to material handling for quarter fulfillment. We deliver a fulfillment solution that includes both hardware and software. The products go inside warehouses and help make the distribution process more efficient for retail merchandisers,” Mountz said. “It’s well-suited for brick-and-mortar retailers and those in e-commerce.”

The system involves hundreds of mobile robots, all of which move shelving around inside warehouses, making the entire pick-and-pack process easier, faster, and more accurate. Whether the challenge is picking same-day orders or delivering boxes of products to retail stores, Kiva can help improve the distribution process with its automated warehouse system.

“With our approach, the pickers can stand still at their pack stations, and all of the products they need are brought to them by these robots that can walk and talk,” Mountz said, explaining that this can double or even triple the amount of work that can be performed. Using the Kiva system, each operator can fulfill three or four times more orders than they can using traditional methods, and ultimately, cycle time is reduced from days to minutes.

The system isn’t just fast; it’s accurate, too. After all, fast shipping isn’t much good if a consumer receives the wrong product. Mountz and his team recognized early on that if their system was going to be successful, accuracy was vital.

“If someone orders red, green, and blue, they want to receive red, green, and blue. They don’t want black, yellow, and orange. That’s why we designed our process to allow pickworkers to verify every SKU they put into a box during the fulfillment process,” Mountz said.

The pick-and-pack systems Kiva delivers include hardware and software, both of which are updated regularly to ensure continuous process improvements. Mountz said that in recent years, he and his team have introduced several upgrades of this sort. “We’ve worked hard over the last few years to expand the applications and functionality that our system can provide,” he said.

“Originally, we focused exclusively on the pick-and-pack operation; now we have applications that support the shipping functionality,” he added, referring to the company’s advanced hardware products. “We’ve also introduced upstream applications that focus on pallet receiving.”

Although new hardware development is a definite focus, a lot of Kiva products are software based, which means updates are a top priority. Mountz and his team work hard to deliver new programs each year; they typically contain better algorithms and a wider assortment of options, helping the system to work faster. The result of this effort is a product that improves over the years. Considering that most technology investments worsen in efficiency over time, it’s a feat worth highlighting.

“Any customer who’s had a Kiva system for more than a year will tell you that their system has gotten better each year,” Mount said. “The updates we provide make this possible because they increase the amount of work that can be achieved in an hour. It’s truly a novel idea because most products, like conveyors for example, perform at their peak initially and get worse over time. When someone invests in a Kiva system, they can rest assured that’s not going to happen.”