Back to Profile Gallery > Rhee Bros. 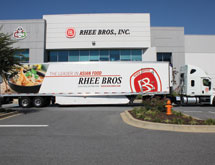 Immigrants to the United States often seek some semblance of the country they left behind, and it’s usually with food. Korean immigrant Syng Man Rhee discovered that commonality 45 years ago among the growing immigrant population in suburban Maryland.

To address the need, he founded Rhee Bros. in 1976 to “deliver a taste of home,” which became the company motto and philosophy, President Robin Rhee says. “I am most proud of what my father, uncles and family were able to create virtually out of nothing but luck, great timing, a lot of hard work and effort,” he adds. “We call it the squid story.”

Syng Man moved to the United States in the late ’60s to study political science in Washington, D.C., and planned to move back to Korea to pursue his political ambitions. Things changed for Syng Man in 1968 when he needed to hold multiple jobs to support his family. He contacted his mother in Korea to ask for financial assistance, but instead of cash, she sent him a shipment of dried squid and a note that told him to sell it for money. Syng Man followed through after his initial shock wore off. He went to the market and sold the dried squid quickly, Rhee says.

The Hanover, Md. – based company began by importing products from Japan because it was a more developed country than Korea was in the mid-1970s. Today, Rhee Bros. is the only Asian food company to carry authentic, quality products from every major Asian cuisine – Korean, Chinese, Japanese, Vietnamese, Thai and Filipino.

Rhee Bros. was one of the first Asian food companies in the United States to carry branded products. Many food items were either homemade or locally made, Rhee explains. Using the Assi brand, Rhee Bros. was able to promise consistent quality and pricing. In 1989, the company began a retail affiliate relationship to sell its products at Lotte Plaza, an Asian supermarket chain. Assi and Lotte now have 15 stores nationwide carrying Rhee Bros. products.

The company carries more than 5,000 SKUs of dry, refrigerated and frozen food; Asian produce, frozen meat and seafood products; and non-food items such as chopsticks and rice cookers. “Almost every week we are coming out with new products,” Rhee adds. “We come out with two to 15 items per week. Some do well and some don’t do well.”

Rhee Bros. imports all its products from Asia. The company picks up its shipments at the port of Baltimore and its own fleet of trucks deliver to its major markets in Baltimore/ Washington, Chicago, New York, Philadelphia and Atlanta. Trans­portation has been a challenge for the company since 2011 when it received a “conditional” rating from the United States DOT, Director of Transportation Rick Rodgerson says.

“Our main focus has been to correct all our compliance shortcomings,” Rodgerson says. “A conditional rating means that transportation has problems, but they are fixable. We were awarded a conditional rating in September 2011. I came on board August 2012 and we have been working to correct that rating ever since.” The Federal Motor Carrier Safety Administration upgraded the company’s rating to “satisfactory” in July after reviewing the controls put in place, and Rhee Bros. recently won the Maryland Motor Truck Association’s safety award in the mileage category.

Electronic on-board monitors have since been placed in each truck to record the number of service hours each driver logs, ensuring the legal limit of hours on the road is being followed. The new monitors, in conjunction with the recent hours-of-service rule changes, made drivers less productive because they covered less ground, but Rhee Bros. found a solution by streamlining routes, Rodgerson explains.

“With this new transportation management software, we have been able to streamline our routes and run them more efficiently,” he adds. “We have had about a 15 percent overall drop in miles per stop.”

Adaptive cruise controls were also installed in each truck, which slows the truck automatically as it approaches traffic congestion. Rodgerson says the controls also sense obstacles and stop the truck if the driver is not responding. This new technology has helped Rhee Bros. go from about six DOT recorded accidents per year over the past six years to zero in 2013, Rodgerson says. “First and foremost, we are getting all the trucks operating safely for you, me and everyone else,” he adds. “We want to make sure everyone’s safe out there.”

Increased safety and efficiency is also a selling point for Rhee Bros. The company has begun marketing its trucks for hire to other shipping companies as a cost-reduction measure. Revenue is lost if the trucks run without a load from its outbound destination back home to Maryland, Rodgerson says. “We hire our trucks out to other shippers and now we pick up loads out of, say, Dallas, Arkansas or Florida and it helps lower our cost,” he explains.

The future is full of changes for Rhee Bros., including new leaders who were born and raised in the United States and increased competition as the popularity of Asian cuisine continues.

Rhee Bros.’s upper management is in the process of a generational and cultural change, Rhee explains. “Since I was born and raised in the U.S., I have more of an American-style of business management and the management before was all Korean-raised,” he explains.

Rodgerson says since the younger generation has taken over, Rhee Bros. has become more focused on the mainstream. “We are now present in a number of major grocery chains and are expanding more into the American mainstream marketing,” Rodgerson says. “We want to be the guys who stock the Asian food aisle in every grocery store in every part of the country.” ­­­