Back to Profile Gallery > AT&T 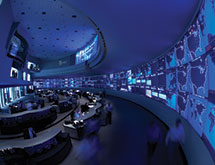 Maintaining the speed and innovation required in the ever-changing and fast-paced technology world requires transformation and constant improvement within the Dallas-based company’s network supply chain. To achieve this transformation, the company in 2013 launched Domain 2.0, the next generation of a supplier domain program introduced in 2009.

The initiative involves redesigning the network and the supply chain to manage the next generation of demand for mobility customers. Specifically the company is moving network purchases from predominately hardware to predominately software solutions that are integrated through AT&T’s Wide Area Network (WAN).  These solutions utilize Network Function Virtualization (NFV) and Software Defined Networks (SDN) principles as well as other approaches.

“SDN is an architectural framework for creating intelligent networks that are open, programmable and application-aware,” AT&T says. “NFV is the process of decoupling hardware from software that transforms dedicated network functions into software-based virtualized network functions that can operate in a common, standard, execution environment, supporting a large variety of services.”

All of the software needed to drive applications and route customer requests will be stored in a cloud architecture.

“This approach virtualizes our network, separates hardware and software functionality and lessens our reliance on proprietary hardware and software designs,” Supply Chain and Fleet Operations President Tim Harden says. “Under our previous model, we would buy a proprietary piece of hardware from a vendor with software already loaded, deploy it, then grow capacity on these boxes. If the capacity demand exceeded the capacity of the box we would have to buy another box until we met the demand.

“The market is driving demand for capacity at such a rate now that we expect a four-times rise in peak demand in the next five years. The existing model of meeting demand will be too expensive and too slow to meet this rate of demand.  Thus, the reason for driving for a different model for building our network.”

This approach better manages the increased traffic on AT&T’s network. “We required a radical and different approach to how traffic is managed and handled within our network, and to do that, the most cost-effective way was to separate software from hardware, manage software in a virtual environment and let hardware be more of a commodity,” he adds.

The company already has begun vetting potential vendors and plans to announce the awarding of business beginning in the first quarter of 2014 through the end of 2014. Focus will be on technology roadmap, quality, cost and innovation, among other factors. AT&T anticipates using many new vendors, in addition to a view of its existing domain vendors, as part of this new approach.

AT&T adopted a supplier domain approach in 2009 to both reduce capital spending and introduce products to market faster. The approach divided the company’s network-related spend into eight components, or domains, of the network bounded by particular technologies such as wireless access or home access. Each domain is served by two vendors, and each domain vendor has a five-year contract.

“We looked at our industry and the supply base at the time and concluded that we needed a different approach with suppliers in order to have a solid supply base for the future as we deployed new strategies,” Harden says. “Prior to this approach, we would have done RFPs for small pieces of each category and integrated the solution ourselves from all the pieces; now, vendors have the ability to hunt across every transaction I was going to do in that category and they do the integration.”

The domain approach reduced the company’s time to market from 23 months to 12 months. “We can now get to revenue much faster, as do the vendors, and our vendors can gain access to our senior management, so we can strategically see where their road map is going to be for the next 24 to 36 months,” Harden says. “We’ve put into place a very collaborative process that puts their technical teams and our technical teams in sync with each other and our leadership in sync, as well.”

The recent upgrade to the Domain 2.0 program is anticipated to further reduce time to market from 12 months to six months, meaning customers will see a more rapid rollout of new products and features.

The domain approach represents roughly 45 percent of AT&T’s total supply chain spend. “We are one of the largest companies in the world from a spend perspective,” Harden says, noting the company works with roughly 60,000 vendors. Vendors are placed in four tiers: domain, strategic, tactical and transactional. “Domain is the highest level of collaboration and longer-term contracts. Strategic are vendors key to our solution but don’t require as much collaboration with our executive team to deliver their solution and require full team sourcing resources to manage,” Harden says. “Tactical are vendors embedded into our solution but can be replaced as necessary and may or may not have sourcing assigned. And transactional vendors are used for spot solutions and typically use purchase card or snapout agreements to manage them.”

AT&T’s procurement team works specifically with the transactional vendors. “This group does an excellent job setting up our processes and flow for how we procure materials,” Harden says. He adds that the team’s work has been called “best in class” in terms of its structure by third-party reviews, including a Hackett Group report.

The company’s supply chain supports three distinct functions within AT&T. A consumer group handles handsets, tablets, devices, set-top boxes and other customer-facing products that are distributed to AT&T’s 2,500 stores nationwide and other retailers and agents. This group is served by two distribution centers.

The third supply chain group supports the efforts of the company’s sales organization in managed services hardware and video and data premise equipment and also performs planning, sourcing and logistics activities for the entire company.

In total, the company purchases roughly $63 billion worth of materials annually. In 2013, roughly $14 billion of AT&T’s supply spend went to minority, woman and veteran-owned companies. “We have a top-notch supplier diversity team and are delivering 29 cents of every dollar utilizing a diverse supplier,” Harden says. “We have a strong corporate commitment to working with a diverse community of suppliers.”

In addition to its commitment to diverse suppliers, fleet sustainability is also a high priority for AT&T. The company is investing up to $565 million as part of a strategy to deploy more than 15,000 alternative fuel vehicles over the next 10 years. Currently, 8,000 of the fleet’s total 70,000 trucks, cars and vans run on alternative fuels such as compressed natural gas (CNG).

The new alternative fuel trucks will be based on a chassis built in the United States by an automotive manufacturer. The company will work with domestic suppliers to convert the chassis to run on CNG, and will also work with natural gas service providers to build up to 40 new fueling stations within the next five years, the company says.

AT&T also expects to replace the passenger cars in its fleet worldwide with alternative fuel models. Approximately 7,100 passenger cars will be replaced over the next 10 years, the company says.

The investment follows the company’s successful deployment trials of 105 alternative-fuel vehicles in 2008 and four hybrid vehicles in California in 2007.

“We’ve used every type of alternative fuel that is available,” Harden says. “This reflects our philosophy of being good corporate citizens and reducing our carbon loading and gas consumption.”

AT&T also has a goal of spending the majority of its supply budget on suppliers who track greenhouse gas (GHG) emissions and have specific GHG goals by the end of 2015. The company acknowledges its suppliers’ sustainability efforts through an awards program that has awarded seven suppliers for their efforts to improve their energy efficiency and impact on the environment.

“Looking forward, our focus is on training our contract managers in sustainability so that they can work directly with their suppliers to help improve our collective impact,” the company says. “We’ll continue to incorporate sustainability clauses into our contracts and strive to support industry-wide solutions to simplify and standardize reporting.

“With our efforts, we expect to improve our own operations and provide a positive influence on those with whom we work.” ­­­