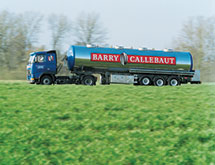 For more than 150 years, Barry Callebaut has been one of the world’s leading producers of chocolate and cocoa products. With 50 production sites worldwide, the company serves customers around the globe, which means managing its supply chain is a massive undertaking. Keeping a close eye on Barry Callebaut’s supply chain across the Americas is Vice President of Operations and Supply Chain Ken Cotich, who says the company is highly skilled at leveraging its global capacity to serve customers locally.

“We look at our footprint very much as a network, so we utilize all aspects of it to meet our customers’ needs,” Cotich says.

Despite the global scope of the company’s footprint, a major component of Barry Callebaut’s success from a supply chain perspective is its close, direct collaboration with its customers, according to Cotich. This, combined with its continuous adoption of new technology to optimize its operations and product flows, makes Barry Callebaut a true leader in the industry.

Barry Callebaut has been experiencing a significant amount of growth in terms of volume over the past several years, which has been good news for the company overall but also a challenge at times for its supply chain operations. Cotich says the company increased its volume in the last four years by nearly 50 percent, and keeping pace with that growth requires a lot of planning and flexibility in times of demand spikes. Cotich says normal seasonal spikes are covered by the company’s extensive planning process, but the potential for unforeseen spikes required some additional effort throughout the entire supply chain to stay ahead of demand.

“We’ve really had to work very closely with our customers to plan that out and leveraged our network capacity to be able to meet all their demand,” Cotich says.

Cotich adds that the company’s young and energetic staff maintains a strong line of communication internally, with the central planning group working closely with the plant planning group and other departments. Because of this, Barry Callebaut has maintained a high level of service even in times of high demand. “I think we have a very talented group, and I think we work the sales and operations planning process very well,” Cotich says.

Barry Callebaut is taking steps to scale up with its increased volume, as well. In general, the company has adopted a five-year forecast study to define the growth potential in its major product categories and geographic markets, and Cotich says it has spent a significant amount each year for the last three years on expanding its factory network and further optimizing its supply chain operations.

Specifically, the company is utilizing advanced software platforms to help manage the flow of products in and out of its supply chain with greater efficiency. Cotich says Barry Callebaut is in the process of working with customers and its internal IT department to develop a sophisticated new transportation management system in order to optimize its third-party distribution services. Once that system has been implemented, the company will follow that with an upgrade of its warehouse management system. Cotich says the company’s goal is to have a total logistics management system that could be used in each region, covering its entire global network of locations. “We have the systems there now in terms of central planning, but we’re looking to upgrade, as well,” he says.

Operating its global locations on the same type of system will prove to be a vital step for Barry Callebaut, as one of its greatest advantages right now is its ability to help its customers grow their business around the world.. Cotich says the company has many global contracts with major customers because of the presence it has both in developed and in emerging regions. “Customers want to get the same high-quality products in emerging markets, and we’re there to serve them,” he says.

Barry Callebaut has an extensive manufacturing presence in developing regions of the world, Cotich says. For example, over the last few years the company has become a major player in Mexico, and is making inroads into Brazil and – currently – in Chile.

Cotich explains that the company’s supply chain operations are very strong, and that it is leveraging its network to further strengthen its position as the outsourcing partner of choice in order to take over more customers’ chocolate and cocoa supplies partly or entirely, giving them the opportunity to focus on building their brands and on distribution. “Our whole operations and supply chain philosophy is to put the product closer to our customers,” he says. ­­­