Back to Profile Gallery > Port of Miami 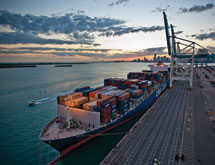 In Florida, the Port of Miami is not only a vital part of the infrastructure, but a key contributor to the economy, ac­cord­ing to Kevin Lyns­key, assistant port director for business initiatives.

“The port is a powerful economic generator,” he says. “It is the second-leading generator in Miami-Dade County.” For instance, while the port itself employs a staff of 400, it also helps support 180,000 jobs both directly and indirectly, in the state through its businesses, which include cruises and cargo line services.

On the cruise side, the port has maintained long relationships with Norwegian Cruise Line, Carnival Cruise Lines and Royal Caribbean Int­ernational. “We are very lucky to have a location that allows us access to Car­ibbean ports of call,” Lynskey says. “The cruise lines have shown a high preference for home porting out of South Florida ports.”

In 2010, a record 4.3 million passengers traveled through the Port of Miami for cruise vacations to the Caribbean, the Bahamas, Mexico and beyond. The Port is looking forward to future growth including, a banner 2012-2013 cruise year when it will welcome three newbuild ships from Carnival, Celebrity Cruise Lines and Oceania Cruise Lines.

Additionally, beginning in the fall of 2012, Regent Seven Seas Cruise, a market leader in the upper premium and luxury segments of the cruise industry which now operates out of Port Ever­glades, will relocate its ultra-luxury brand to Miami.

“Miami is an exciting and sophisticated international city and a destination of choice for travelers in the premium and ultra-luxury segments of the marketplace,” Lynskey says. “We look forward to continued growth in this segment of the market.”

The port also has a broad reach on the cargo side, as it offers services to nearly 24 cargo lines and reaches approximately 250 ports in more than 100 countries. “Last fiscal year, we were the leading container port in Florida, [and] we were No. 11 in the county,” Lynskey adds.

Currently, the port is investing $2 billion in capital projects, Lynskey says. One project in the program, which has a budget of $915 million, involves the construction of a tunnel under Gov­ern­ment Cut that will link the port directly to the U.S. highway system. “[This will create] two tubes of two lanes each that will link us to Int­er­state 95,” he says.

Work began on the tunnel project nearly two years ago, Lynskey says. Curr­ently, a $45 million boring machine that is 42 feet in height is being assembled on Watson Island. The tunnel project is the largest of its kind in the Southeastern United States and will be completed in 2014.

Once operational, the tunnel is ex­pected to handle approximately 80 per­cent of the traffic on and off the port, providing vehicles quick and easy ac­cess to cargo yards and cruise terminals.

Another project, known as the Deep Dredge, involves the port dredging its harbor to a depth of 50 feet. “It will allow new Post-Panamax class vessels to come through the Panama Canal and make Miami a new stop,” he says, noting that the $150 million project will be finished in 2014.

The U.S. Army Corps of Engineers is now completing the design and engineering phase of the dredge project. Construction will begin next year, making the Port of Miami the only U.S. port south of Norfolk, Va., capable of accommodating larger Post-Pana­max ships when the expanded Panama Canal opens in 2014. As the closest U.S. port to the Canal, the Port of Miami is well-positioned to grow int­er­national trade and commerce.

The last project connects the port to a 14-acre transfer facility and the national railway system. In partnership with Florida East Coast Rail­way, the port is restoring tracks that will offer shippers access to more than 70 percent of the U.S. population in three to four days transit time.

“This will allow the Port of Miami to direct load for the overnight rail to Jacksonville, [Fl.] and beyond,” Lyns­key says, adding that the $50 million project will be finished in 2013.

By interlocking the operation of on-port cargo facilities with FEC’s rail and inland assets, the Port of Miami will reduce time to market and lower inventory costs for manufacturers.

“On the Deep Dredge program, we have 100 percent funding locked and loaded,” Lynskey says, adding that the projects have earned positive reactions at the state level.

“We were fortunate enough in March to spend several hours with Gov­ernor [Rick] Scott,” he recalls, adding that one day later, the Governor contrib­ut­ed $77 million to the project.