Back to Profile Gallery > Settoon Towing 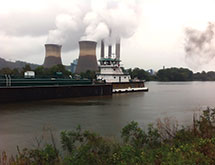 Settoon Towing strives to deliver first-class marine transportation to customers in the inland waterways of the United States. Founded in 1968, the company says it offers an array of services at favorable rates while providing the safest possible working environments.

“We are a traditional inland tank barge operation that moves liquid cargo as opposed to dry bulk,” President Russ Settoon says. “We move gasoline, diesel, jet fuel, crude oil and produced water. We have about 550 employees and we are the fifth- or sixth-largest privately held inland tank barge operator in the U.S. We are moving product from just about every location you could possibly think of. We even have vessels in Nigeria.”

Headquartered in Pierre Part, La., Settoon Towing’s customers are  major oil- and gas-producing companies, as well as  refineries. It delivers crude to refineries and takes away finished product after the refining process. The company also has operations in Houston and Houma, La. Its fleet consists of 65 push boats and more than 130 tank barges that operate from these strategic locations. Its barge offerings include several sizes and arrangements of tank barges, while its boats offer a wide range of horsepower configurations that maximize fuel consumption and efficiency.

“Our operations are based in the Gulf and coastal waterways from the Corpus Christi area to Panama City, Fla., and from New Orleans up the Mississippi River system, including the Illinois and Ohio rivers,” Settoon says

The company has one of the youngest fleets in the inland marine transportation industry, constantly investing in new state-of-the-art equipment. It has an aggressive maintenance program in place to ensure reliable service. Also, because the company regularly renews its fleet, it is able to sell surplus equipment to customers.

“We have first-class equipment,” Settoon says. “The tank barge industry was mandated a few years back to double-skin vessels by 2015. We’ve been done with that since 2010, and we’ve added horsepower because the barges are heavier.”

Additionally, Settoon Towing is committed to attracting and retaining the best employees through competitive wages and benefits, as well as a safe working environment and strong interaction between employees and management. The company also understands the importance of health, safety and environmental awareness, as it has invested in training, policies and procedures that work to ensure the health and safety of employees and the protection of cargoes and the environment.

“Training new labor and continuing education for existing labor is key,” Settoon says. “Our vessels don’t run without people, and we have some of the best. There is a lot of competition for people because the Gulf Coast dodged the recession for the most part and unemployment stayed low. We’ve been able to branch out and look at the Mississippi River corridor where there was high unemployment to bring people in.”

As a key piece of the supply chain for its customers, Settoon Towing works to overcome any issues that arise along the way. Some of those issues are related to natural conditions. For example, the Mississippi River has recently seen record high and low water numbers, which challenges the inland infrastructure. In low water, Settoon Towing has had to short-load and lighten up the draft, while in high water it has needed adequate horsepower to deal with the river conditions.

Settoon Towing is also adapting to some of the trends of  its industry. These include factors such as where the physical bulk of domestic production is located. In the past, it was concentrated on the Gulf Coast and West Coast, but now it is coming from some of the bigger shale plays in the Midwest and the Dakotas. However, the refineries are still on the Gulf Coast and West Coast.

“Instead of shipping product north on a pipeline away from the refinery, now the pipelines are bringing crude to the South,” Settoon says. “Pipelines are the most efficient method, but the infrastructure is fairly old and barges are a great midstream method of transport. We make sure we research the markets and understand the capacity of the area so we don’t build too much equipment for customer demand.”

Settoon Towing is confident growth opportunities will be available in the years to come, possibly through acquisition. Settoon Towing considers itself the best barge tank operator in the business, and it believes it can continue to demonstrate excellence with liquid cargo transportation service in the nation’s inland waterways.

“It will be a challenge to keep our fleet as young as it is,” Settoon says. “We’ve been fortunate to have a lot of growth, which has allowed us to invest in our assets.” ­