Back to Profile Gallery > SMC Corp. of America 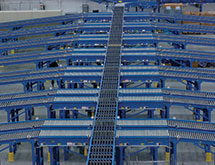 Based in Noblesville, Ind., SMC Corp. of America specializes in products for the life science, machine tool, food and packaging, secondary battery and other industries. Fleming notes that the firm is the U.S. subsidiary of Japan-based SMC Corp., which is “the world’s largest supplier of pneumatic components for industrial automation.”

In the past year, SMC Corp. of America has grown substantially, Fleming says. This has included a 600,000-square-foot expansion of its facility in Noblesville. By acquiring additional property, the company grew its land from 95 acres to more than 200 acres.

With the additional space, Fleming says, SMC Corp. of America will be able to expand the capacity of its production facilities to meet market demand.

Recently, she says, the company has seen many firms switch back to U.S. manufacturers from suppliers in Asia because of transportation and quality issues.

“We’re starting to see it a little bit [with our own clients],” she says.

Changes for the Better

SMC Corp. of America also has made changes to its supply chain, Fleming says. “Several years ago, there were two ways to move freight from our parent company plants in Japan and China: ocean or air,” she recalls. “We have since evolved to incorporating direct-to-customer moves as well as for those specific items that are not stocked in our North American central warehouse. We have increased local production and have more mass-produced product from SMC China factories meeting our high-quality standards.”

The company also has sought ways to make itself more efficient through lean practices, Fleming says. Since it began to implement lean, the company has found it has “a lot of flexibility on the production side,” she declares.

For instance, after the addition of a conveyor belt to its facility in Noblesville, “We have more than doubled what we are processing,” she says. “We’ve probably gained 30 to 40 percent in efficiencies.”

She also highlights the company’s use of software that monitors its inventory levels. “When we get to specific levels, [it automatically orders more product], so we can make sure we maintain our inventory on the core items,” Fleming says.

Fleming, who has been with SMC Corp. of America for more than nine years, is proud of the company’s staff. Like her, many of them are long-term members, with up to 25 years at the company. “Everyone works together for the best interest of SMC,” she says.

Fleming predicts that SMC Corp. of America’s parent company will continue to grow as it introduces more new products. “We are pushing to gain 50 percent marketshare worldwide,” she says. “We’ve got a lot of high targets as a company.” ­­­