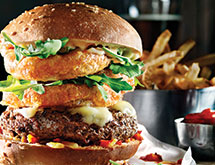 Earls Kitchen + Bar was founded on the principle that guests should be able to expect good food and a good time every time they walk through the door. Today, the company has more than 60 locations spread across Canada and now parts of the United States, so ensuring the same level of quality in every one of those locations is a high priority. Coping with the growing pains that have come with international expansion has been a challenge, but as Vice President of Procurement and Logistics Claudia Vorlaufer explains, it is a challenge that Earls Kitchen + Bar is meeting head-on.

Founded more than 30 years ago by father-and-son team Leroy Earl and Stanley Earl Fuller, Earls Kitchen + Bar has grown into one of the most popular casual dining chains in Canada, with 65 locations from Vancouver to Toronto.

Although the company has had locations in Denver for many years, Earls Kitchen + Bar recently began making more inroads into the United States, opening in Miami with Boston opening in the fall, Chicago and Virginia in 2015.

Vorlaufer says the company expects to open many more American locations, making an effective supply chain one of its top priorities over the next several years.

In the 10 years she has spent with Earls Kitchen + Bar, Vorlaufer has overseen a supply chain operation that she says ranks among the best in the restaurant business. She credits this to the hard work of the company’s employees, the strong relationships it has built with its suppliers and its internal systems.

“I think in general Earls is very well-known for operational excellence, and I think that truly does push into all aspects of what we do,” she says.

Earls Kitchen + Bar has a number of strong systems in place to monitor and enforce compliance with its quality standards in every location. Additionally, the company knows it can rely on its suppliers, many of which have been working with the company for more than 25 years. It’s because of this that the company can guarantee guests they will receive the same quality food and service every time they frequent their local Earls Kitchen + Bar.

The expansion of the company into Miami this year prompted some significant changes to the way Earls Kitchen + Bar’s supply chain operations were organized. Before, Vorlaufer explains, the company’s supply chain combined procurement and logistics into a single team, which focused on one aspect at the expense of the other. “The more markets we moved into, the less time was spent sourcing and more was spent on logistics,” Vorlaufer says.

To ensure that both sides of the equation received the proper amount of attention, Vorlaufer and the company split the departments into separate procurement and logistics teams. The procurement teams concentrate on working with the culinary teams to ensure each location has the same high level of quality ingredients, while the logistics teams focus on making sure those ingredients reach the restaurants in a timely fashion.

Vorlaufer says this new approach has worked out well for Earls Kitchen + Bar so far, and is expected to make the company’s further expansion into American markets smoother and less stressful. Along with the company’s new location in Miami, it has plans to open a Boston location in the fall of 2014.

From there, the company has its sights set on opening new locations in Virginia and Chicago. As the company expands, Vorlaufer says, its logistics and procurement departments will grow along with it to handle the influx of demand.

The company’s focus on expanding into the United States has, in effect, split Earls Kitchen + Bar into two companies with their own unique challenges depending on which side of the border they are on. In the United States, Vorlaufer says, the company’s main challenge is not having the same footprint it does in Canada, making it more difficult to dictate the variables of sourcing and logistics without the same economies of scale it has on the other side of the border.

In Canada, she adds, the company is tasked with keeping its brand fresh and pushing the envelope with unique offerings that will attract new customers as well as familiar ones. This means the company places a great deal of emphasis on creating and testing new menu items, which in turn means sourcing new ingredients.

Despite these challenges, Vorlaufer says the company’s unwavering focus on delivering the best possible experience for its patrons has made Earls Kitchen + Bar a major success story and will continue to be the foundation of its success no matter where it goes in the future.  She says the company’s logistics and procurement operations go a long way toward making sure this is possible.

“We’re proud to be able to create the same experience from Vancouver to our newest opening in Miami,” according to Vorlaufer.