Back to Profile Gallery > FLS Transportation 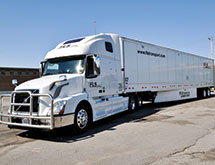 In 2005, FLS Transportation changed its main focus from cross-border shipping between Canada and the United States to primarily serving the U.S. domestic market. The decision, spurred by the increase in value of the Canadian dollar – which led to less cross-border business – proved to be a fateful one for the Montreal-based logistics provider.

“It was very tough for us initially,” Principal and President Michael Flinker says. “We went after many of the clients we already had to get their domestic business, but it was like going to the back of the line.”

The onset of the global recession in 2008 didn’t make the decision easier. Like many companies, FLS needed to adjust its costs to adapt to a significant downturn in its business, including downsizing its staff. Though the global economy began to recover in 2010, it took two additional years for the company to see an upswing in its U.S. shipping business. “It was five years of hell for us, in no uncertain terms,” Flinker says. “It took a lot of tenacity and hard work convincing clients we were worth a shot.”

FLS’s perseverance began to pay off in 2012, when it started to grow its business and rebuild the staff it had been forced to cut. Domestic shipping across the United States now represents 80 percent of the company’s total business, with cross-border and Canadian shipping making up the rest. “Since 2012 we’ve had our best years ever,” Flinker says. “We’re still a powerful cross-border player, but we’ve now become a major player in the U.S. market. Had we not made that adjustment, we probably wouldn’t be around today.”

Flinker co-founded the company in 1987 with Domenic Di Girolamo, CEO; and Egidio Pizzingrilli, its COO.  The company today operates offices in Montreal; Toronto; Calgary; Vancouver; Chicago; Salt Lake City; Atlanta; Reno, Nev.; and Springfield, Mo. An office in Mexico will open in September 2014. FLS specializes in providing truck transportation to commercial and other customers; its other services include warehousing, intermodal, freight management and air and ocean freight shipping. “We don’t want to just be a commodity player,” Flinker says, noting that FLS’s loads include store fixtures and emergency supplies. “We’re looking for high-end business, and that’s why our growth has been so spectacular.”

A Culture of Service

Flinker credits the company’s growth to its service-driven culture. Many of FLS’s employees have been with the company for more than 15 years. “Our service is second to none,” he says. “We’ve been able to create a culture that compensates people for performance and allows autonomy on the job.”

Employees are paid salaries plus commissions, and no cap is placed on income. “Our employees are driven to perform,” Flinker adds. “Our culture and pay structure allow us to attract the best people in the industry.”

New employees go through a highly regimented training approach that includes being paired with operations and sales people for mentoring. “Finding people who can adapt to our culture is a challenge,” Flinker says. “We don’t just bring in anyone – we’re very careful about who we hire.”

FLS’s clients work with a team of employees that includes sales, operations and customer service staff as well as executives. “Our relationships with our customers are golden,” he says. “They have a multitude of people they can talk to about any issue they may be having, and everyone here is available 24/7.”

The company contracts with a number of carriers across Canada and the United States. “We scrutinize our carriers with incredible depth before we take them on, because they are the face of our company,” Flinker says.

FLS ensures that its carriers can adapt to its technology systems in a seamless manner. The company’s systems include the Cognos platform for sales reporting and TMW for dispatch. “TMW has customized their platform for us, and we were one of their first customers,” he adds. “A lot of the changes they’ve made to their system over the years have been a result of things we’ve asked them to do.”

Technology continues to be a major area of investment. “Anything that can help us cut costs is critical,” Flinker says. “We have our IT department constantly looking for new products that can enhance our performance; we have to stay on the cutting-edge.”