Back to Profile Gallery > All American Foods 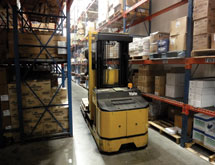 In its 22 years of business, All American Foods has grown from operating out of a residential garage with a small refrigerator and freezer to reaching nearly full capacity on a 100,000-square-foot facility.

Independently owned restaurants and caterers make up most of All American’s customer base; smaller grocery stores, food service providers, and schools and universities are also served. The company is Rhode Island’s largest independently owned broadline distributor. Its delivery fleet of 25 trucks also serves parts of Massachusetts and Connecticut, Pant­eleos adds.

All American Foods has seven key points of customer service Panteleos feels helps it stand out amongst its competitors. These are: