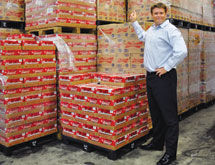 The development of Cayman Distributors Ltd. is as casual as a ride in the back of a pickup truck. When company founder Ken Hall started the Cayman Islands business in 1968, he had been working in the island’s fledgling banking industry. He saw that the few pubs that existed were forced to import their products directly from offshore sources or purchase directly from one of the local hotels. After finding local partners, he decided to quit his banking job and start a liquor distribution company.

Soon, he was navigating the island’s primitive dirt roads to deliver beer off the back of his pick-up truck. And, within a few years, the distribution business became an incredible success.

By the mid-1970s, the population of the Cayman Islands grew steadily as a result of the rapidly developing banking and tourism industries. As people came from all over the world to live and work in the islands, they brought a demand for beverages from their native lands.

Hall founded Cayman Distributors on the basic premise of providing customers with what they wanted: the importation and distribution of global beer, wine, spirits and non-liquor beverages. Having already established himself on the islands as a reliable and knowledgeable beverage distributor, Hall’s company was uniquely positioned to take advantage of the demands of the increasing population. Although he retired the pickup truck, Hall kept his overheads low so his brands would remain the most competitive in the market.

In 2007, after nearly 40 years at the helm of Cayman Distributors, Hall sold the company to Active Capital Ltd., the venture capital wing of Cayman Islands-based Dart.

Early in 2008 Cayman Distributors and Blackbeard’s combined under the banner of Cayman Distributors Group (CDG). “Unlike the United States, the Cayman Islands does not prohibit liquor companies from operating in both the  wholesale and retail segments,” notes Matt Bishop, General Manager for CDG.

In 2010, CDG acquired a chain of retail stores known as Big Daddy’s, allowing for the distribution group to etch out an even larger share of the beer, wines and spirits market on the islands.

Just when all seemed to be smooth sailing for CDG, the business took a significant hit. “The global economic crisis had a severe effect on the Cayman economy with some estimates showing a population decline of as much as 20 percent since 2008,” Bishop explains.

To overcome the economic decline, CDG implemented a number of innovative tactics. “Firstly, we made a conscious decision to expand our retail presence through the acquisition of Big Daddy’s,” Bishop notes. “As people started to feel the economic pinch we saw a clear trend away from consumption in the bars and restaurants, to people drinking at home, and we wanted to take advantage of this change.”

The second tactic CDG employed to ride out the economic storm was to invest in its facilities. “Construction of a new 30,000-square-foot warehouse and office facility was completed late in 2010, and provided Cayman Distributors with massively improved operational efficiencies,” Bishop says.

Investing in major capital projects perhaps goes against the conventional wisdom in a recession, but CDG knew that in order to improve the business, the basic infrastructure had to be in place. And that goes beyond the distribution plans or the warehouse.

“We also invested heavily in human resources,” Bishop adds. “Great businesses don’t come about by accident; they are built by great people.”