Back to Profile Gallery > A.T. Cross 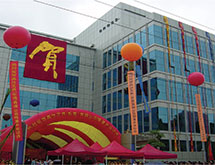 After 168 years, A.T. Cross Co. has earned a reputation as an American brand that provides high-quality craftsmanship, Vice President of Global Operations Bryan Fournier says. “The fact that we have endured many challenges is a symbol of the brand in itself,” he says.

Based in Lincoln, R.I., Cross manufactures high-quality pens and pencils, journals, timepieces and other accessories, including wallets, eyewear and money clips. Its most popular item, Fournier notes, is its Century Line of pens.

“Everybody’s received that for graduation or other defining moments in their lives,” he says. “The Century is definitely the product that [generates] people’s recognition with the brand.”

Richard Cross and Edward W. Bradbury started the company in Providence, R.I., in 1846, and manufactured gold and silver casings for wooden pencils. As the firm grew, more members of the Cross family joined the business, and in 1889, it created its “Peerless” fountain pen.

In 1916, Walter R. Boss purchased Cross, starting a 97-year legacy of company management under the Boss family. “The management team was very diligent in steering the company,” Fournier says, noting that the Boss family ownership allowed it to cope with industry challenges.

Cross also sells to specialty pen shops and has distributors that bring its products to 80 different countries. Fournier adds that the company also sells directly to the end-consumer. “You can order customized products, [such as] decorations with company logos,” he says.

On The Right Path

Cross is changing its supply chain in a number of ways, including its ordering, packing, inventory and forecasting practices. One area the company recently evolved was its method of product packaging.

Previously, when the company sent pens to its warehouses, it would ship them in a standard gift box, a retail box, a self-serve box or a duty-free box, which is used by airlines. “Now, we’re bringing just the pen in and bringing the package in separately,” Fournier says.

“When we get the confirmed order of the customer, we’ll do the packaging in the warehouse,” he says, noting that this spares Cross the time it would spend repackaging items. “It’s going to double the inventory turns. The amount of cash we have tied up is going to reduce significantly.”

Although the company experienced some resistance to the new method in its warehouses, that has changed as the locations see the benefits. “We now have our U.K.-warehouse running on this system and they’ve seen some of the benefits,” Fournier reports. “We’re headed on the right path.”

Cross also made arrangements with its suppliers to build additional stock but to store it in their own warehouses. “The consignment schemes allow us to have inventory but not on our books,” he states.

Cross plans to implement supply chain software that will be used by all of its locations. “It is on the horizon,” Fournier says. “We’re going to identify which is the most relevant and useful for us.”

A longtime veteran of Cross, Fournier joined the company in 1999 after graduating from college. “I started in engineering and worked my way up,” he recalls, noting that he became part of Cross’ technical engineering team that transitioned its manufacturing to China.

Afterward, Fournier stayed in China as its managing director, but returned to the United States in 2014 to take his current role. Today, he says, Cross’ business has been impacted by technological advancements.

“With the age of electronics, we feel that people are writing less,” he explains. “But we don’t necessarily believe that writing is going away. It’s an important part of communication.

“We also believe it’s an important part of how kids develop language skills and some of their memorization skills,” he asserts. “Being able to put a pen to paper touches different parts of the brain than just doing it on an iPad or on your computer.”

Going forward, Cross plans to continue promoting itself as a luxury brand, he says. “We want to be at the top of mind with our business gift customers,” he says, noting that Cross’ products are perfect for a company’s anniversary celebration.

The company also is in the process of acquiring Sheaffer, a fine writing instrument business, from BIC Group. “It fits better with Cross,” Fournier says. “Over the next two years, there’s going to be a tremendous amount of work implementing their supply chain with our supply chain, and trying to gain the efficiency of similar products with similar heritages.”