Back to Profile Gallery > Roseburg 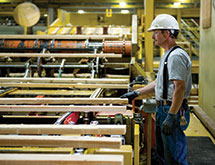 Like a healthy tree, Roseburg has roots that run deep and branches that spread a great distance. For more than 75 years, Roseburg has been one of the biggest names in lumber and wood products, with the nation’s largest sawmill in terms of capacity and the broadest selection of green wood building products in the industry. Thanks to the steady growth the company has experienced since its founding in 1936, Roseburg has a footprint in the industry that spans more than 600,000 acres of sustainable forest and a national distribution network that supplies customers across the nation.

Like any tree, however, a distribution network can suffer from rot and overgrowth if not tended to regularly. Director of Transportation and Logistics Thomas Gennarelli joined the company earlier this year with the goal of improving Roseburg’s supply chain operations and make them more efficient and effective. As a veteran of the wood products industry and the package industry before that, Gennarelli brought substantial experience to his new position at Roseburg and has helped the company enact some very positive changes so far. With a renewed concentration on improving communication and utilizing the latest technology, Roseburg is doing everything it can to ensure that it remains at the top of the industry for the next 75 years.

When Gennarelli joined Roseburg earlier this year, he examined the company’s supply chain closely and identified a number of areas that were in need of improvement. Although the company was doing an exceptional job at inventory management, he says, there was a serious lack of communication among Roseburg’s business units and its systems were in need of updating. These were the first areas Gennarelli concentrated his efforts, and the company has made substantial progress toward resolving those issues already.

The other area of the company’s supply chain that needed immediate assistance was the technology Roseburg used to keep tabs on its fleet and manage shipments. Gennarelli says the company’s systems were several years behind the curve when he first arrived, but now Roseburg has brought in industry-leading solutions providers such as TransWorks and Raven Technologies to provide it with an integrated system for managing truck and train shipments. He says those systems should be fully integrated into Roseburg’s supply chain operations by first-quarter 2015, and the company continues to look for other software platforms that can drive greater efficiencies, such as systems for dispatching the company’s private fleet.

As Roseburg continues to find new ways to overhaul its supply chain operations in a global sense, it also has made significant improvements in some specific areas. For example, Gennarelli says one major improvement involved the company’s transportation of lumber through Alaska. Originally, lumber was transported on steamships, but the company discovered it could save more than 30 percent of its costs by transferring the lumber to railcars that could be offloaded onto barges. “We will net almost $400,000 in annualized savings in 2015 from several continuous improvement projects,” Gennarelli says.

The key to ensuring that Roseburg’s efforts are successful is making sure every stakeholder buys into the changes, Gennarelli says. He says in previous experiences the attempts to improve the supply chain that were far less successful because there was not the same level of focus on getting  all stakeholders on the same page, which led to areas of the supply chain that were operating much less effectively than others,  slowing the entire operation down. “I’m taking a little more time to ensure that this is done correctly and key stakeholders have a say in the process,” Gennarelli says.

In the near future, Gennarelli says Roseburg will focus on making further improvements on the transportation side of the supply chain. In particular, the company is exploring greater utilization of LTL movements and small-package shipping and optimization of  its reloads. He says the company also is exploring the use of more automation on the production side to drive greater efficiencies and sync with systems in transportation. All of these improvements and more will be necessary if Roseburg wants to maintain its position in the marketplace and grow even further, Gennarelli says. “The company wants to expand and grow its footprint, so there’s a lot of exciting things going on in our company,” he says.