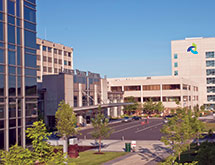 After 116 years, Lehigh Valley Health Network has no interest in its supply chain becoming stagnant. “We don’t hesitate to apply new ways of doing things to our business,” Vice President and Chief Procurement Officer of Supply Chain Management William Matthews says. “We take time to learn what we can from our colleagues in the industry, and what we could do to gain a better stance in our organization.”

Based in Allentown, Pa., Lehigh Valley is a four-hospital system with two surgery centers and thousands of clinical professionals, Matthews says. The network’s history goes back to 1899 when a group of civic-minded women opened The Allentown Hospital in 1899.

When the region’s population surged in the late 1950s, a Lutheran clergy bought an alfalfa field in Bethlehem, Pa., and built the Muhlenberg Hospital Center, which opened in 1961. This was followed by Leonard Parker Pool’s funding of the Lehigh Valley Hospital-Cedar Crest in Salisbury Township, Pa.

Pool, the founder of Air Products and Chemicals, decided to build the hospital because many in the community did not have local access to cancer treatment, including his wife, Dorothy. Pool donated $5 million for the construction of the hospital, which was built in 1974.

Today, Lehigh Valley offers care in 95 clinical specialties and serves a 60-mile radius, ranging from Allentown to Reading, Pa., north to Scranton and south to Philadelphia. “We’re about a $2 billion-plus organization with more than 1,100 beds in total,” Matthews says.

Lehigh Valley is nationally known for its care, he adds. “It’s a dynamic organization, a gem in northeastern Pennsylvania,” Matthews states, adding that the network has partnered with the University of South Florida as its academic partner to train future physicians, strengthening its recognition in research and education.

A factor that has been key to the organization’s success is its clinical collaboration, Matthews says. “We work hand-in-hand daily with our clinicians and administrative staff so we understand their challenges and their needs. We have exceptional support from our senior leadership for the work we do.”

The supply chain team also makes “it part of our daily agendas to make sure we’re visiting our locations and developing a strong sense of what the needs are for the organization,” he says. “We’re out there in the field, trying to figure out a better way to do business.”

This approach has been rewarding. “We’ve got a strong sense of teamwork, which you don’t always see,” Matthews says. “When you go to other places, they’re largely siloed and trying to break out of it.”

But at Lehigh Valley, “We’ve had an even playing field for several years,” he says. “That’s helped us get work done in a professional manner. We are always looking for ways to innovate.”

On a Lean Journey

Lehigh Valley’s supply chain endures constant cost pressures, Matthews says. “The pressure is always on,” he admits. “Our quest to contain costs is always at the top of our list in terms of what our tasks and our goals are.”

Matthews says in healthcare today change is constant. “Over the next five years, we’re going to have to be really creative to innovate, be agile and flexible [when it comes to] healthcare cost containment,” he says.

Lehigh Valley has coped with rising costs by becoming more efficient in its supply chain, including implementing lean initiatives that consolidated the majority of its operations under one roof, Matthews says. Today, its supply chain team operates primarily out of one site that is supported by satellite locations.

Lehigh Valley also redesigned all of its warehouse locations “to be more effective in terms of picking and restocking so that we have all the high-moving inventory items centrally located,” he explains.

“We have the warehouses laid out so the picking and putaway flow is much more efficient and streamlined,” he says. “We’re not wasting time or effort in terms of how we stock and pick.”

Lehigh Valley’s supply chain has added new technology that made it more productive and efficient, Matthews says. These include automated barcode scanners that facilitate the picking and putaway processes.

“We also use robots for delivery and vacuum tube systems,” he explains. “We have several robots that deliver inventory stock to the floors, usually on call, which helps us in terms of sending labor up to the floors, if it’s required.”

LVHN is also implementing an enterprise system that will impact the entire network. “The first phase of that was in the outpatient areas,” Matthews says. “We’re also upgrading our materials management system in April 2015 which will help bring about a number of efficiencies.

“We do have other technologies waiting in the wings, in terms of inventory management,” he says, noting that these will be launched later this year in October or November.

Lehigh Valley’s staff has adjusted well to the changes but of course there has been a learning curve. “It does take time, because product knowledge is important,” Matthews says, noting that employees have needed three to four months to adjust.

To keep their skills sharp after training, “We observe their pick rates and they compete against each other,” he says. “We also provide them statistics [on their performance] on a daily basis.”

Lehigh Valley shows these numbers to workers on a screen displayed in the warehouses. “They can see how they’re stacking up against their colleagues,” he says. “It nurtures pride as well as competitiveness.”

The initiatives also have helped the supply chain “grow our capacity with the products we handle by 20 percent without increasing our labor force,” Matthews says. “It’s been a real win for us.”

A longtime veteran of Lehigh Valley, Matthews began working for the network part-time 20 years ago. “I was a consultant here and I had several engagements over the years,” he recalls. Matthews took his current role in 2008.

After all these years, he says that the ability to communicate is essential when working in the medical supply chain. “[You should] walk in with eyes wide open, be flexible, engage your staff and engage your market,” Matthews says.

The industry will “continue to change, and you need to adapt,” he asserts. “There are multiple ways to solve a problem and [managers should] be open to the change. I think if you stay stationary, you’re going to get run over.”

Matthews sees more industry shifts ahead. “More and more is going to be done in an outpatient setting,” he says. “[But] I don’t think fee-for-service is going to go away.”

Additionally, “While maintaining our non-profit mission, we have to act like a business, but more like a for-profit business,” Matthews says. “We have to pay close attention to what’s going to happen in a consumer-oriented marketplace.

“Patients are becoming more and more knowledgeable and educated about healthcare value,” Matthews states.  “Those are the kinds of tenets we need to embrace, embellish and get good at.”