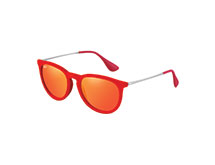 With more than $10 billion (U.S.) in sales in 2013 and a strong international distribution network, eyewear manufacturer Luxottica is close to achieving its goal of having its eyewear products worn by everyone. In addition to designing, manufacturing, distributing and selling premium, luxury and sports eyewear under its own brand name, the company also produces licensed products for a number of high-fashion brands including Chanel, Prada, Coach and Giorgio Armani. The company also owns the Ray-Ban and Oakley eyewear brands.

The company continues to enter new markets and regions and introduce new product lines. “We see ourselves as a organization that has a lot of opportunities to continue to grow,” says Albert Josiah, the Italy-based company’s vice president of logistics and distribution for North America.

Josiah attributes the company’s growth and success to its employees as well as its long-term strategy, business model and products. Although Luxottica operates large production lines and uses machines to aid in the manufacturing of its products, it relies most heavily on the human touch. Quality and manufacturing personnel are closely involved in designing, inspecting and cleaning products before they reach customers.

“We believe there is no one better than us when it comes to the quality of the product,” Josiah says. “We believe that having people working on the product makes our craftsmanship superior to anyone else.”

Supply chain operations play a large role in the company’s growth. “Supply chain is part of the very fabric of what we do,” Josiah says. “Our ultimate goal is to have the right product at the right place at the right time in a sellable condition.”

+Wholesale, which includes large department stores such as Bloomingdale’s, Macy’s and Dillard’s as well as thousands of independent opticians;

+E-commerce, which includes sites such as Sunglasshut.com, Ray-Ban.com and Oakley.com.

Coordinating shipping schedules and competing with other manufacturers for capacity is one of the company’s biggest challenges, one that it addresses by ensuring that its North American locations maintain a large inventory, he adds.

Commonwealth is assisting Luxottica with optimization efforts at the Columbus and Dallas distribution centers and helping it improve its manufacturing capability, Josiah notes.

Josiah, who joined Luxottica in 2013 after serving as director of operations for Nike, is working to transform the company’s supply chain operations. After arriving at Luxottica, he set three goals. The first was to build the right team of people. “One of the first things I did was have one-on-one meetings with everyone here to look at the scope of the work they did. I got to know all the employees, their backgrounds and their ambitions,” Josiah says. “I placed people into places where they would be the best fit, even if that meant moving them beyond their comfort zone.”

Josiah also looked outside of the company to high-level supply chain employees of other companies. Both new and existing employees were given training programs to build their skills, he says.

Josiah’s second goal at Luxottica was process improvement. This involved visiting all North American distribution sites and having conversations with employees about existing systems and practices and ways to improve them. These conversations are leading to a number of initiatives, many of which are specific to the Atlanta distribution center.

The company in 2015 will begin implementing its “Atlanta X” plan, which it believes will support the center’s business for the next 10 years. These initiatives include adding automation to the center’s picking process to make it more efficient, adding cross-dock functionality and implementing the Vocollect voice pick system.

In addition to the improvements at Atlanta, Luxottica is investing in voice pick systems in its smaller distribution centers. The company is also looking to replace the different versions of SAP it has at its different sites internationally with a single system, Josiah says.

Josiah’s third goal for Luxottica’s supply chain is related to product analysis. The company is working to more quickly respond to individual market needs, such as the need for sunglasses in Florida and California, where they are top sellers.

“We’re determining the places that need quicker replenishment based on sales figures,” he adds.  Other supply chain-related projects underway at the company include a centralized routing system and a customs program – called First Sale – that will enable importers to reduce duty costs.

Although Luxottica’s international reach, marketshare and willingness to invest in supply chain improvements are all positive attributes of the company, Josiah says he is most proud of another aspect of its operations. “I am proud to be part of an organization that gives back to the community it serves,” he said.

The company is a global sponsor of OneSight, an independent nonprofit organization “committed to working together to eradicate the global vision care crisis for the more than half-a-billion people who could have their sight restored with an eye exam and glasses,” the organization says.

OneSight partners with local health organizations, governments, and others to help more than 8.5 million people in 40 countries. In 2013, Luxottica Retail North America contributed $10 million to the organization.

“We want to let the world know we’re here to serve and not just sell product,” Josiah says. “We see ourselves as being a company that does good things.”