Back to Profile Gallery > Energy & Infrastructure 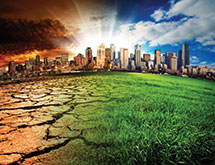 According to the recent study “Supply Chain Sustainability Revealed: A Country Comparison,” by CDP and Accenture, climate change is becoming an increasing concern for many. As issues around climate, regulations and consumer attitudes evolve, they are influencing supply chains by exposing them to increasing risk levels.

The report looked at 66 corporations with $1.3 trillion in procurement spend, asking their suppliers to provide information on how they are looking at opportunities and challenges related to climate and water risks. The survey ultimately had data from nearly 3,400 companies worldwide, up from fewer than 2,900 in 2013.

CDP and Accenture were able to analyze the data at the national level. This allowed the two firms to assess relative climate risks faced by supply chains in 11 key markets.

In addition, they were able to study how prepared the supply chains are to manage these risks. Moreover, the study gained insight into suppliers’ willingness to work with customers to reduce risk, as well as find opportunities related to climate issues.

According to the study, there are high levels of climate risk in key supply chains and inadequate supplier response. Supply chains in the U.S., China and Italy are considered vulnerable, while suppliers in India and Canada are not doing enough to manage climate change risks. Specifically, Indian companies have a small level of inclination to report on emissions. The worst-case scenario was found in Brazil, where – for the most part – suppliers are doing little to manage climate exposures.

At the same time, the study indicates that there are opportunities to be found for collaboration and strong return on investment, especially in developing economies.

Suppliers in France, the U.K., Spain and Germany are identified as the most sustainable. They have taken extensive measures despite comparatively low levels of exposure to climate risk. Japan is the only country with suppliers that are well equipped to respond to high climate risks as they have matched their awareness and actions with the high levels of risk to which they are exposed. Suppliers in Japan can claim some of the highest levels of emissions reporting, target setting and climate risk awareness and management.

Chinese and Indian suppliers indicated openness to collaboration with supply chain partners to reduce climate risk. In addition, they deliver the greatest return on investment where they do invest in emission reduction initiatives.

The report from CDP and Accenture also examined overall trends. This allows for comparisons against the findings of previous editions of the study.

Among the findings from this year’s responses are an increasing level of climate risk management within supply chains. The study says this is generating better climate risk outcomes.

At the same time, emissions disclosure is down and collaboration has decreased when compared with last year’s study. At the same time, water risk remains an issue, with 45 percent of exposed companies not carrying out a water-risk assessment.

In the end, the suppliers and program members have shown that they are aware of climate change issues and are interested in addressing them. Procurement spend is a big driver in the global economy, and collaboration between purchasers and suppliers can lead to positive change.

The study indicates that more measurement and disclosure about carbon footprint data can help companies and suppliers to identify and incentivize emission reduction initiatives. Additionally, CDP’s Action Exchange initiative will continue to act as a forum for change by promoting collaboration between major purchasers, suppliers and solutions providers.

At the same time, the study shows that suppliers should embrace more sustainable modes of operation because doing so is in the best interest for their businesses.

Such initiatives can help suppliers to reduce their costs by driving efficiency in resource use, and they can also help to set the suppliers apart as sustainability becomes a more important issue around the world. This will be particularly true should policymakers continue to provide and build upon regulatory standards that hold companies accountable in the process of addressing climate risks.