Back to Profile Gallery > 3M Canada 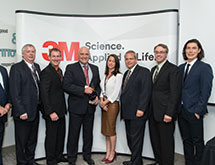 In countless ways, 3M has made life easier for hundreds of millions of people all over the world. From manufacturing to healthcare to electronics, 3M’s innovations have touched lives by improving the way people live and work. But it isn’t only the end-users of 3M’s products who reap the benefit of the company’s never-ending commitment to continuous improvement. As 3M Canada Director of Strategic Sourcing Jeff van Geel explains, the company devotes just as much energy to improving life for its internal staff and business partners, as well. He says a number of recent initiatives under way within 3M Canada demonstrate the lengths to which the company will go to maintain its position as a global innovation leader.

According to van Geel, 3M Canada has undergone a significant transformation that aims to revitalize communication between project teams and improve supply chain operations across the board. The company also has taken the initiative to develop a new supplier awards program that recognizes and strengthens the relationships between 3M Canada and its supply partners. 3M Canada also is taking a more global approach to its supply chain by sourcing from more global suppliers thanks to advances in communication technology.

Van Geel joined 3M Canada as a consultant contracted to design a Six Sigma program for the company’s print division. Based on the success of that program, van Geel was hired to oversee 3M Canada’s strategic sourcing operations. During his tenure, van Geel has expanded the strategic sourcing department’s purview from simply sourcing to include accounts payable and package engineering. He says the recent initiatives going on at 3M signify an exciting new period for the company in Canada and beyond.

One of the most substantial changes going on at 3M Canada at present is the implementation of the SAP supply chain management software platform, which van Geel says has been a global initiative throughout the entire company shepherded by President, CEO and Chairman of the Board Inge Thulin. The main inspiration for the company’s adoption of the SAP platform was to ensure that all of 3M’s divisions work together, rather than in the siloed format they were operating under in the past. “We need all the different work streams to be talking to each other,” van Geel says.

Communication is essential for teamwork, and van Geel says the SAP platform ensures that all of 3M’s divisions are on the same page. The company’s legacy data system had been in place for more than 29 years and didn’t provide the same level of data completeness that the SAP platform features. As a result, division leaders often found that data was incomplete or incompatible across different divisions. “SAP is much more rigid and requires 100 percent accurate data to process,” van Geel says.

According to van Geel, the implementation of the SAP platform has already resulted in greater teamwork across 3M Canada’s different divisions, and he attributes the success of the program so far to the dedication of the company’s people. “SAP changed everything,” van Geel says. “I’ve got a great team who are very dedicated to 3M and the success of this project.”

According to van Geel, all departments throughout 3M Canada nominated suppliers for each award, which are being given to suppliers based on what the company calls the TQRDCS methodology. The manufacturing world is familiar with TQRDC, which stands for technology, quality, responsiveness, delivery and cost, but 3M has added an “S” for sustainability to the methodology.

The awards were presented to suppliers in May, with 3M Canada President Paul Madden speaking to the attendees. “We’re maintaining our commitment to them as suppliers and maintaining that we need to be collaborative in our approach,” van Geel says. “In global sourcing we’re becoming much more collaborative with our suppliers.”

He adds that help from its suppliers around the world has been instrumental in 3M Canada’s transition to the SAP platform. “We definitely needed the collaboration from our suppliers as we worked through learning how to use the system,” van Geel says.

3M Canada’s supplier base has become more global in scale over the last several years, and van Geel says this is because the state of the global economy makes it worthwhile to look for suppliers no matter what region of the world they’re in. “We have more meetings now globally in scope because we’re buying from all over the world,” he says, adding that technology has made this possible. “They’re connected 24/7 now, and the issue of time zones is not such a factor because people can log on from home at 10 o’clock at night and have their meeting with Asia.”

Through these initiatives, 3M Canada is ensuring that its supply chain operates at the highest possible level of efficiency and effectiveness, and van Geel says that’s more important than ever. “There are many risks to our supply chain, so we are always making sure that we have availability of the goods and services that we need,” van Geel says.