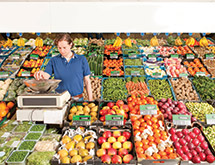 Think payday lending with a twist.

You may have heard of a hot topic that’s gaining more and more ink in the press lately: payday lending.

After President Obama touched on it in his State of the Union address, the Consumer Financial Protection Bureau announced February 9 it will be drafting regulations “that could sharply reduce the number of unaffordable loans that lenders make” and specifically targeting payday loans, according to The New York Times.

But what exactly is a payday loan? In general, a payday loan is a short-term loan that lends money against one’s paycheck, and the borrower then pays back the lender once they receive their paycheck. According to Pew, the average payday borrower takes out a $375 two-week loan with a fee of $55. Though this difference might not seem enormous in terms of a dollar amount, the annualized interest rates for payday loans can range from 300 to 2,000 percent—and some have even reached over 5,000 percent. Many payday lenders, in addition, require long-term contracts, which locks desperate borrowers into a never-ending cycle.

It’s great that the government and the media have started to recognize the predatory nature of payday loans. Unfortunately, there are many more victims than just individual consumers. A similar practice targets small businesses; there’s just a different name for it – it’s called factoring, and it’s grown into a $3 trillion business worldwide.

How does factoring work? Many small businesses that sell to large corporations get paid on a 45- or 90-day cycle, which can leave them cash-starved. In fact, according to Dun & Bradstreet, 90 percent of small business failures are due to poor cash flow. Because banks are often reluctant to lend to smaller companies, small businesses often have difficulty gaining access to affordable cash.

So what do they do? Just like a payday borrower who sells their paycheck for less than what it’s worth, small businesses sell their invoices to a factor for short-term cash. Again like payday lenders, factoring often requires long-term commitments, often at absurdly high interest rates, so small businesses are locked into a cyclical trap that’s difficult to break.

Fortunately, many large corporations are working to make sure their suppliers have affordable access to financing and so that they don’t become the prey of lenders like factors. New technology platforms provide constant access to affordable financing with just the click of a button. These platforms allow small businesses to accelerate early payments in exchange for a small discount so they can get cash faster. Instead of having to wait months for payments from corporations, small business suppliers can choose when they want to be paid.