Back to Profile Gallery > Visiting Nurse Service of New York 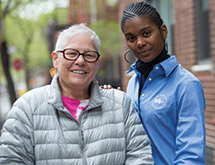 Established in 1893, the Visiting Nurse Service of New York (VNSNY) has been serving New York City for more than 120 years. The largest not-for-profit home- and community-based healthcare organization in the country, VNSNY has more than 1,500 nurses and 950 other clinicians as well as over 12,300 home health aides.  Collectively, they serve more than 35,000 patients per day throughout the five boroughs of New York City and Nassau, Suffolk and Westchester Counties.

With any large organization that has been operating for as long as VNSNY has, there are bound to be areas within the organization that periodically require an upgrade or revitalization. Certain procedures can become routine after years of repetition, even when these procedures are no longer as efficient or effective as they once were. Because VNSNY is a forward-thinking organization, explains Director of Procurement and Contract Management Donald Brown, it started taking steps more than 10 years ago to revamp its entire procurement operation and ensure that this operation was as efficient and effective as it could be for the agency’s thousands of employees and patients.

One of the oldest not-for-profit home healthcare service providers in New York City, VNSNY specializes in providing a comprehensive array of home- and community-based care, including skilled nursing care, rehabilitation therapy, home health aide services, and behavioral health therapy in patients’ homes. In the last year alone, the agency cared for more than 164,200 patients in the city, and its professionals made more than 1.9 million clinical home visits. As part of its mission to be the best-in-class provider in the region, VNSNY has made some sweeping improvements under Brown’s direction. Although the benefits of these upgrades have been numerous, he notes, the work is really just beginning.

When Brown was brought on nearly 10 years ago, VNSNY’s purchasing department did little more than rubber-stamp other departments’ requests—an approach that resulted in some significant inefficiencies throughout the agency. When Brown joined VNSNY, he was given the task of transforming its purchasing department into a strategic sourcing asset that could save the agency time and money while also helping it better serve its patients. Over time, Brown put together a team of procurement experts to help him carry out this transformation. “They’re all very good at what they do,” he says.

One of the most glaring examples of the agency’s inefficiency in procurement before its transformation was in the area of office supplies. VNSNY was using 10 different suppliers for office supplies before Brown joined the organization, spending more than $1 million a year. Under his guidance, the agency created an Request For Proposal (RFP). As a result, it was able to source all of its office supplies from a single supplier, creating savings and logistical efficiencies.

Another major change VNSNY went through under Brown’s supervision was the establishment of a contract management system, which the agency didn’t have before. The department was able to gather data on how every department within the organization created contracts with suppliers—or why they didn’t. “One of the valuable things about working in a procurement or strategic sourcing area is that you get to touch and see every single piece of the organization,” says Brown.

The contract management system allows Brown and his team to examine every potential contract with a supplier. What’s more, he adds, all VNSNY departments must now have a contract in order to make any purchases, providing accountability on both sides. “If there’s no contract, then you’re not doing the deal,” he says.

The most significant challenge in enacting changes of this magnitude in an organization the size of VNSNY is to get buy-in from all areas of the agency. Brown notes that this was one of his biggest priorities during the transition. “When you first start a new process,” he says, “you have to get both the senior leadership and the staff as a whole to sign on to the idea that you’re all going to work this way.”

That process involved instilling a culture within the agency that emphasized the creation of long-term, mutually beneficial relationships with suppliers. According to Brown, many organizations underestimate the importance of having a good rapport with their suppliers, and also don’t understand that suppliers have to be successful if they’re going to properly serve their clients. Signing a lopsided deal that is good for just one side, he explains, is only beneficial in the very short term. “You have to enjoy the vendor that you’re working with,” he says. “If there’s a personality issue between the two of you, you’re going to either have to work it out or part ways. It takes time to get that balance right.”

Brown reports that the changes VNSNY has made in its procurement process have given it a more positive outlook for its future. Meanwhile, the agency is continuing to find new ways it can better serve its patients. For example, all of VNSNY’s nurses and clinicians recently received new tablet computers to help them maintain records outside the office. “We don’t want them tied to  desk,” Brown says. “Their job is to be out in the field, supporting our patients.”

With its procurement processes streamlined, Brown’s team is now focusing on making further improvements elsewhere in the agency’s supply chain. Although these involve deeper changes within the organization, he says, they will allow VNSNY to continue providing vital services to patients for a long time to come. “The low-hanging fruit is all gone,” he adds. “Now we have to climb the tree.”