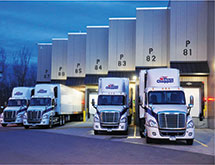 Nowadays, not only are supermarkets expected to have in stock enough of an ever-growing variety of food and pharmaceuticals that consumers desire, but they even are being tasked with getting the merchandise into consumers’ homes. Previously, that last mile was the domain of the shopper, but now home delivery is being offered at five of Price Chopper Supermarkets’ 135 locations. An alternative curbside pickup option is also offered at seven of the chain’s locations.

“We have a fleet of vans which service these customers,” announces Jason Kennedy, who was director of distribution services at press time. “Personal shopping has become a growing part of our business over the last few years since we started offering these services in 2011.” The supply chain’s challenge is to drive cost out of what tends to be an expensive operation by using onboard computers, telematics data analysis and route optimization.

That level of technology is being used throughout the supply chain of Price Chopper Supermarkets, which according to Supermarket News is currently the 45th-largest food retailer/wholesaler in North America. In the company’s 180,000-square-foot non-food warehouse – one of four distribution facilities located in Schenectady, N.Y. – a pick-to-light carousel system speeds picking of smaller items. A light indicates whichever item in a metal basket is to be picked when the basket rotates to the picker’s location for selection. High-velocity products such as New York state tollway transponders and gift cards work well in the small baskets.

Within the main distribution center campus is a warehouse for pharmaceutical products that helps relieve inventory demands on the stores with pharmacies. “What we’ve done is centralize the actual counting and shipment of key items,” Kennedy says. The company’s software system automatically prepares refill maintenance and mail order medications that are used regularly by certain customers in advance of the customers purchasing them. Robotic systems in the pharmacy’s central fill facility count out the pills prior to packaging them.

“The central pharmacy will receive the order the day before and essentially fill a prescription, verify quantities via a pharmacist onsite and ship the prescription to the store the next day so it is available for the customer,” Kennedy explains. “This obviously improves inventory levels – resulting in greater turns and less outdated product – but it also allows the pharmacist to do what’s most important, which is interacting with customers as opposed to simply filling bottles.”

Technology also is improving delivery with Price Chopper’s 75 tractors and nearly 400 trailers, of which approximately 180 are refrigerated. Different temperatures can be maintained in the refrigerated trailers through the use of bulkheads to separate compartments, which are monitored for temperature. “We’ve asked many of our fresh suppliers to begin using their temperature recording devices,” Kennedy declares. “It allows us to track the temperature of the product throughout the shipment on our inbound deliveries.”

Telematics on the company’s fleet analyze hard braking and idling time. This feature alerted Price Chopper to a truck that was having difficulty traveling in inclement weather.

Price Chopper operates 13 ripening rooms in its 400,000-square-foot perishables warehouse. “We’ve been ripening bananas in-house for many years, but we upgraded those rooms to a state-of-the-art facility,” Kennedy says. “It was a multimillion-dollar project that increases our capacity by about one-third. This gives us the opportunity to potentially ripen other items that are growing in terms of demand, such as avocados. That project was extremely successful and allows us to better serve our customers by providing them with products of optimal ripeness. The increase in capacity allows us to better service our stores, especially during those weeks when we feature products on promotion.”

Price Chopper uses its computer-generated ordering (CGO) system in a unique fashion. “We are one of the few supermarket systems to use it at store level,” Kennedy maintains. “Most retailers in our line tend to want to control forecasting at the warehouse level.”

The CGO system evaluates the historical movement of each product based on variations in price point instead of by promotions. “It looks at what price the item is being featured at, and then it takes into account the shelf capacity, how many are on hand and then the delivery schedule of that specific commodity,” Kennedy explains.

Ordering at the store level enables corrections to be made in inventory count for discrepancies, such as a pasta sauce jar that a customer broke by accident that a warehouse-based system would not know was missing. The CGO system also responds to spikes in demand caused by local conditions, such as a heat wave spiking sales of bagged ice. Additionally, a store manager can make changes to the system, such as overriding a forecast to account for an annual local event that causes an increase in sales of beer or other products of which the CGO system otherwise would not be aware.

Kennedy attributes the supply chain’s success to keeping current. “I think the main challenge is just keeping up with the rapid change of technology,” he concludes. “At Price Chopper, we’ve been successful at implementing innovative projects and initiatives which have helped us reduce our cost of operation and deliver value to our customers.”