Back to Profile Gallery > The North West Company 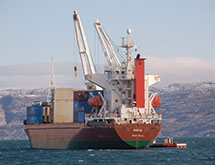 The Arctic Circle is one of the more isolated and harsh environments on Earth. There are few roads and less infrastructure. Shipping goods over 1,000 miles is always a challenge, but in the north, every delivery is a small miracle.

Allen joined North West in October 2014 to implement the company’s new transportation management system (TMS), drive expense out of the supply chain and improve service to stores. With limited transportation infrastructure, Allen says servicing communities while keeping costs down is an ongoing endeavor. “It really is unlike any other retailer that I’ve seen,” she says of the logistics challenges.

Bringing goods to those remote communities requires multiple modes of transportation and the method changes with each season. When possible, North West partners with air carriers to make regular deliveries to its stores using planes such as the ATR 42 and a Boeing 767 that makes trips form Winnipeg to the hamlet of Iqaluit. “In the north, air freight is the primary mode of transportation, especially for fresh groceries,” Allen says.

During the summer, when the icy surface of the arctic waters melts and waterways become navigable, North West uses Sealift ships to bring bulk supplies to many of its communities. The ships travel as far north as Artic Bay and Pond Inlet, two communities located on Baffin Island where the hottest day of 2015 was 60 F and the coldest -46 F, according to the Canadian government’s official records.

“The remoteness of the communities and the harsh conditions we face in respect to the climate are our biggest challenges,” Allen says. To solve those challenges, carriers must communicate with North West and its store managers to keep them informed of inclement weather that can prohibit trips. The wait for a break in the weather can sometimes take as long as a week, Allen says, so when the skies clear it is important for North West and its carriers to move quickly to deliver goods to those communities. Fresh food comes first and other goods are prioritized according to need.

Few other companies have North West’s experience in handling these types of transportation issues and the company has learned how to react quickly to changing conditions. “Our advantage is that we have been serving these communities for such a long time that we know the communities, we know the carriers and we know the weather very well,” Allen says.

Because they serve such remote places, North West stores often become a gathering point in a hamlet or town. The company takes that role seriously and strives to develop strong relationships in its communities. In many markets, North West stores must offer additional services to fill the needs of the local population, such as check cashing, tax preparation, parts and repairs to all-terrain vehicles and Ski-Doos, while also offering kiosks for popular franchises such as KFC and Pizza Hut.

It is important for North West that its employees be seen as part of their communities. A town off the Beaufort Sea might have only 350 residents. There, the regular customers are truly regular and a store manager might see the same locals multiple times each day. In those scarcely populated areas, having the people to work at a retail store can be as important of a resource as the actual goods on the supply chain. “Depending on the size or market, we continually have to recruit, train and invest in our store staff,” Allen says.

Finding those employees is an ongoing effort for North West. The company works to keep staff engaged and develop talent for future management. “In the remoteness of these markets, we count on the training and the good judgment of those people to make decisions for us,” Allen explains.

Many staff members have spent their entire working lives with North West, Allen says, and have developed a high degree of loyalty to the company. “There is a heritage there and that coincides with the brand.”

The natural challenges in the supply chain are unlikely to change, so North West is constantly looking for ways to improve the logistics process. “The biggest initiative that we have in front of us with respect to supply chain is completing the implementation of TMS,” Allen says. Portions of that TMS system are already active in North West’s supply chain, but the company is listening to feedback from its carriers and has identified additional areas where it can improve software and functionality.

Once completed, Allen says the TMS system will create full visibility of the supply chain and offer carriers more flexibility in shipping goods and products to stores. The TMS improvements North West is now developing will enable the company to have true end-to-end track and trace functionality and to maximize the available cargo space of each shipment, whether it be a 53-foot truck trailer or an aircraft fuselage. Maximizing that space will reduce the cost per proud of each shipment and allow carriers to make fewer trips.

North West will begin piloting the new TMS system this fall and plans to roll out the tracking technology by the end of 2016. Allen says the company is still developing a deployment strategy for the full system and it could be introduced in phases.

As it improves its TMS, North West will continue to take a hands-on approach to its transportation as well. Company executives, including Allen, regularly travel to hubs to view the supply chain in action and discuss issues with carriers. “We like to get out and touch and observe the goods as they move through the supply chain,” Allen says, adding that it is exciting to see goods loaded on a plane bound for the north. Major hub locations include the towns of Churchill, Thompson, Rankin Inlet and Pickle Lake.

The effort to create full visibility of the supply chain will also support North West’s intent to invest in its best-performing markets, called the Top Markets Initiative. The company developed a capital plan to update its stores to support its growth categories. In 2014, those top growth areas included foodservice, pharmacy, produce, meat, baby and children, grocery, furniture and motorized sports.

North West’s executives and board of directors are dedicated to see the TMS implementation through and receiving a return on the company’s investment, Allen says, because the project will benefit North West for years to come. “[I’m proud of] the organization’s commitment to reinvest in the transportation management system,” she adds. “It’s underpinning all other initiatives.”