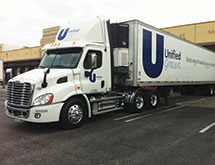 Independent grocery stores often attract customers because of their local, community-based focus. Although this means they can serve their customer base with greater attention to individual customers, it also means they don’t have the scale to compete with large, national chains when it comes to negotiating with suppliers.

For many independent grocery stores, wholesale cooperatives such as Unified Grocers Inc. in the western United States give them the collective buying power they need to keep prices low for their customers. But that buying power is only part of the story of how Unified Grocers provides value to its members. According to Vice President of Logistics Gregg Bostick, the size and scale of Unified Grocers also provides members with benefits when it comes to supply chain and logistics.

Unified Grocers has been serving independent grocery stores on the West Coast since 1915, when it was founded by a group of independent grocers in Portland, Ore. Over time, Unified Grocers added new members throughout the Pacific Northwest, eventually merging in 1999 with Los Angeles-based Certified Grocers and in 2007 it acquired Seattle-based Associated Grocers. The combination of organic growth and strategic acquisitions have allowed Unified Grocers to become the largest retailer-owned wholesale grocery cooperative in the western United States, with more than 360 members and more than 2,900 stores served.

The cooperative’s mission is to help its member grocery stores by giving them the resources and support they need to compete against larger competitors. Whether that support takes the form of buying power, access to a broader supplier base or logistics, Bostick says the key to Unified Grocers’ success has been the cooperative’s ability to tailor its services to meet the specific needs of each of its members.

As the largest retailer-owned grocery cooperative in the west, Unified Grocers gives its members substantial economies of scale when it comes to purchasing. However, that scale also provides members with benefits in terms of their logistics and supply chain needs.

As proof of its capabilities on the logistics side, Bostick points to a recent period in which Unified Grocers started up 100 new stores in 100 days without any service interruptions to its members’ existing stores. Despite the fact that the cooperative needed to commit a large amount of additional resources to stock those new stores, there was no appreciable change in service to members’ existing orders. “That’s all due to the fact that we can brute-force our way through anything,” Bostick says.

The cooperative’s scale is a definite advantage in practically any context, but Bostick says Unified Grocers also is able to focus down to the individual store and change its processes quickly to cater to specific locations when necessary. If a customer changes his or her mind about a particular product, for example, Unified Grocers can adjust the order quickly.

Bostick explains that this capability is due in large part to the experienced and capable people Unified Grocers has in its logistics department.

“Hands down, we have some of the smartest and most tenacious logistics people,” he says.

With more new products hitting the market every year, consumers have more choices today than at any time in recent memory. Although that translates into good news for shoppers, it has made life more difficult for Unified Grocers and the independent grocery stores it serves. According to Bostick, one of the cooperative’s biggest initiatives right now is to optimize the SKU mix at its facilities. That means examining each individual SKU and determining whether it is something that still makes money for its members or if it is something that would be better kept offsite for occasional picks. The cooperative is working to get its buildings back down to a healthier throughput rate while still providing the level of choice and selection its members need for their customers.

More SKUs means more choices, and most independent grocers want to have access to everything they possibly can to offer the best selection to their customers. Bostick says that often means managing shipments that are brought together across multiple facilities. Although this used to mean picking items by hand, which was a labor-intensive process, automation and cloud-based data management are making it easier for Unified Grocers to pull orders together from multiple facilities faster and with more certainty.

Aside from the challenges that have arisen from SKU proliferation, Bostick says Unified Grocers is working hard to mitigate an issue it has seen grow in frequency over the last few years. “What we’re seeing right now is when a member buys large volumes, they’ve been able to get one-off deals with manufacturers that strip off good value from us,” he says. Unified Grocers is doing all it can to motivate its members to purchase from the cooperative as often as possible to make the most of the value the organization offers them.

Unified Grocers plans to continue enhancing its scale and presence in the marketplace, including modernizing much of its transportation fleet and enhancing its information technology infrastructure. Bostick says the cooperative is focusing on its human resources, as well, concentrating on developing talent internally and recruiting the best people in the industry. With all of these pieces in place, Unified Grocers anticipates becoming even bigger and better for its members. “We’ve positioned ourselves to continually grow in different areas,” Bostick says.