Back to Profile Gallery > Whiting Petroleum 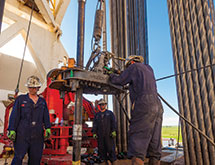 In changing the nature of its relationship with steel mills and distributors, Whiting Petroleum has improved how it procures steel pipe casing and eliminated inventory costs while streamlining the supply chain. “Being able to acquire [pipe casing] in the simplest, most consistent manner at a very competitive price is real beneficial to an end-user such as Whiting,” says Materials Manager Ross Weaver, the man behind the company’s fundamental supply chain shift. Oil producers have utilized distributor stocking programs for years. Whiting was growing fast enough to justify changing the procurement process.

Whiting is an independent oil and gas company that explores, acquires and develops land for crude oil, natural gas and liquid natural gas. The company operates mainly in North Dakota’s Bakken Shale and northern Colorado, where it runs drilling rigs on leased land. It’s proved reserves were 780 million barrels of oil equivalent (Mmboe) at the end of 2014 – a 78 percent increase over 2013 – and it produced 167,000 barrels of oil equivalent per day (BOE/D) in first-quarter 2015.

Weaver has been with the company for four years, overseeing the procurement of the steel casing pipe that goes into freshly drilled wells. The job is a combination of purchasing and supply chain management, but it represented a departure from Weaver’s previous roles in the industry. The first half of his career was spent in a pipe mill where OCTG products are produced. He eventually switched over to sales for the next 15 years. That background knowledge and understanding of the technical sides of casing pipe has helped him to take a larger view of the supply chain.

“It helps to know OCTG (oil country tubular goods) distributors and the people in some of the mills because I used to sell pipe,” he says.

The casing is a steel tube inserted into a drilled well to prevent the hole from collapsing and to protect the well pipe and surrounding environment. Each well uses about 250 tons of casing tubes: 45 tons of surface casing, 150 tons of intermediate casing and 50 tons of production casing. Because casing pipe plays a critical role in the creation of a new well, Weaver says Whiting treats the tubes like a commodity. Like any commodity, Whiting must ensure a steady and reliable supply of high quality casing to keep production flowing.

Weaver’s mission since joining Whiting has been to improve that casing supply through better inventory control. Like many oil companies, Whiting used to order and purchase large quantities of pipe from mills based on its estimated need for the next six months. Orders would be placed in one quarter and delivered two quarters later, regardless of whether the demand had changed, and pipes were stored at Whiting inventory yards until a new well was drilled.

But beginning three years ago, Whiting adopted a new supply chain philosophy that relied more heavily on distributors. Now, the company provides distributors with estimates on how many wells will be drilled and how much pipe will be needed and it’s up to each distributor to order enough casing inventory to meet that future demand. Instead of ordering six months in advance, the new setup allows Whiting’s drill supervisors to determine when the casing is actually needed and inform Whiting’s procurement office. The order is then placed with the distributor and the pipe is delivered directly to the well soon after. Only then is Whiting billed and does it take ownership.

Previously, Whiting had millions of dollars tied up in casing at pipe yards, Weaver says. But with distributors taking over responsibility for inventory in the new model, Whiting has been able to eliminate many of those pipe yards. Whiting has reduced the man-hours it spends on logistics, as distributors are responsible for inspection, maintenance, rail service and trucking. “Customer service is one of the big selling points for any distributor – the fact that they can get it there on time without any delays,” Weaver says.

The reworking of the supply chain required buy in from Whiting’s Drilling Engineers, Drilling Supervisors, Management, distributors, and other partners. Whiting is determined to continue supporting those relationships during the downturn in the oil market. Production has decreased from 20 rigs to nine in the past year, which has impacted the distributors the company relies on and dropped casing prices. “When we had 20 rigs running, distributors were all over us,” Weaver says. Whiting worked with four distributors to supply casing pipe to five rigs each. But with oil prices hovering between $40 and $50 per barrel this summer, Whiting has stuck with one distributor to maintain volume and secure the best price.

The company honors its commitments to partners. When the oil industry was strong in 2014, oil companies projected robust activity to continue in 2015. Oil prices began to dip at the end of last year, and Whiting adjusted by cutting projections in half. However, distributors had already ordered millions of dollars’ worth of pipe based on those earlier estimates and were suddenly stuck with unmovable inventory. Further, Whiting purchased Kodiak, another oil company, on Dec. 8, 2014, and inherited the business’s purchase obligations. Whiting did not want to abandon those distributors and damage relationships so it continued to purchase casing despite low demand. “To try to ease the burden on some of our distributors, we ended up buying some inventory this year,” Weaver says. “You help them out when you can.”

Having redefined its relationships with distributors and steel mills, Whiting is looking at ways to standardize its casing pipes and further streamline the supply chain. “You get a pipe design that works, then use it on all the wells and try to make it uniform,” Weaver says. If each rig used the same pipe the supply would be easier to manager, he explains. “It’s more consistent. You’re actually making the drilling of the wells much more like an assembly line rather than an individual effort.”