Back to Profile Gallery > Boise Inc. 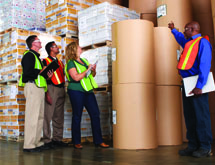 As one of the largest manufacturers of paper and packaging products in the United States, Boise Inc.’s logistics and supply chain operations no doubt have to be as close to perfect as possible. Tens of thousands of tons of paper products move through the company’s two distribution centers and 21 third-party warehouses each month, meaning there’s a lot for Logistics Manager Howard Lortz to keep straight. Fortunately, Lortz has the experience and the expertise to keep things running smoothly for Boise Inc. while also helping to push the company into new areas of supply chain efficiency.

Among the many positions Lortz has held within the company since joining Boise Inc. out of college, he spent a number of years running the company’s largest distribution center in Chicago.

The company’s customers include some of the largest retailers in the country, such as OfficeMax®, Incorporated. Only about 18 percent of the company’s products are sourced to customers directly from the mill – the other 82 percent runs through inventory, where it becomes Lortz’s responsibility.

“I think our greatest strengths are our ability to serve the customer at a high level and at the same time understand what it costs us to serve those customers,” Lortz says. Even though Boise Inc. already has a firm grasp of how to effectively manage its supply chain operations, Lortz says the company continues to find new ways to make improvements. Through the implementation of lean principles and new software platforms, for example, Boise Inc. is building the foundation for an even stronger supply chain.

One prominent way in which Boise Inc. is streamlining its supply chain operations is through its implementation of lean principles. Lortz says one of the company’s largest customers is sharing its experience on the subject. “We have a large focus right now on our distribution centers, and OfficeMax has been on this lean journey for their warehouses and distribution for about five years now, and now they’re mentoring us,” he says. “We have a lot of [Six Sigma] black belts in our organization and we work at different projects at the mills and at the plants.

Lortz says the first step in lean is to create a space for everything, and Boise Inc. has done that in its distribution centers over the past year. For example, each piece of rolling stock and lift equipment now has its designated space. Each piece of equipment is checked in and out every time it is used, giving the company a complete picture of usage at all times.

In a broader context, Boise Inc. also is developing new work standards for every position on its staff and developing standard levels of productivity that the company expects from each role. Lortz says this will give the company a firmer position from which it can analyze employee performance and overall operational efficiency.

Lortz says one of the biggest challenges Boise Inc. faces from a supply chain and logistics perspective is working with carriers to get the best transportation service at the best price. The company needs to turn orders around relatively quickly, and Boise Inc. tries to give carriers at least 48 hours of lead time on all shipments.

Something that is helping with that situation is the integration of new software tracking platforms. Lortz says a new management system tracks deliveries every step of the way, allowing customers to see the immediate status of their orders and taking some of the onus off the carriers to provide that information.

Another significant challenge is to ensure the integrity of shipments on railcars and the safety of people working with them, Lortz says. Most of the paper shipped by Boise Inc. travels in boxcars from the mill to the distribution centers, and through the recent application of new load securement techniques, the company has been able to reduce damage caused to products during shipping while still meeting the railroads’ guidelines. Better methods for securing loads also keep people safer.

Lortz says he expects to see even greater improvements in how Boise Inc. manages its supply chain and logistics through better integration of software and technologies like GPS. “I see technology continuing to play a bigger and bigger role,” he says.­