Back to Profile Gallery > Tintri 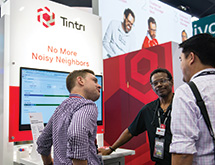 Doug Kahn faced a series of challenges 16 months ago when he arrived at Tintri as vice president of global operations and support. A veteran of larger technology companies, Kahn knew immediately that drastic changes had to be made to the supply chain operation if it was going to support a growing company.

“Our supply chain was too fragile,” Kahn recalls. And so he made significant changes almost immediately, which included moving to Tier 1 contract manufacturers and material suppliers. He also made sure the company had a dual-source supply chain.

Tintri is a leading producer of virtual machine (VM)-aware storage (VAS) for virtualization and cloud environments. The company was founded in 2008 and brought its first product to market in 2011.

It can be tough for start-up companies to forge partnerships with leading suppliers, but Kahn had little difficulty. “All of them were very, very eager for our business,” Kahn says. The companies want to be associated with a technology firms positioned for long-term growth and success, he says. “Suppliers are very aware of the emerging storage players and the expected growth in this sector. They are placing bets on several of these vendors,” he says.

Kahn’s other significant challenge was building his team. He wanted to create a culture and work ethic similar to the ones he’d become accustomed to while working at technology companies earlier in his career. He was accustomed to a meritocracy built on clear lines of accountability, sharp execution, customer focus and results, he says. Not all of the employees he inherited were willing and able to embrace the new direction. “It’s about desire and aptitude,” he says, adding that he ultimately staffed the department with employees committed to taking the company to the next level.

Tintri’s culture was defined by CEO Ken Klein, who came up with the acronym CEEIT, which stands for customer, execution, excellence, innovation and team. Tintri employees take the acronym very seriously, Kahn says. “The words are the tenets that we guide ourselves on,” he says. “We want to make sure we’re walking the talk.”

Indeed, Tintri is making serious strides in an extremely competitive marketplace that Kahn believes will shake out over the next few years. “Everyone in this sector has a slightly different angle,” he says. But there’s not enough room for nearly 20 competitors. Some firms will be acquired, while others will fail, he predicts.

“A few will make it on their own,” Kahn says. “Our bet is that there will be about a half-dozen companies remaining. In one year, I think you’ll start to see things happen. Our value proposition will stand the test of time.”

Over the past decade, the percentage of virtualized workloads has rocketed from 2 percent to more than 75 percent. “Tintri’s solution is specifically built for those virtualized workloads and to help companies reduce capital expense and slash the time and effort it takes to operate storage,” Kahn says.

So far, Tintri’s solution has been well received. “We sell across all verticals and to all sizes of companies, including those in the Fortune 500,” Kahn says.

Approximately two-thirds of sales are in the United States with the remainder in several global markets, most significantly Europe, he says. Additionally, the company is generating significant repeat business. “For every dollar spent on average by a customer, another four dollars will be spent 12 to 18 months later,” he says. “Once they see what the solution can do, they want more.”

Tintri counts Comcast, GE, Time Warner, Sony, United Healthcare and NASA among its clients. Success with clients has led to company growth. Tintri one year ago moved into offices three times larger than the previous facility. Kahn expects another move because the current office is almost full. “We’re growing like crazy,” he says.

Kahn credits the company’s marketing team for much of its success, especially because it understands how to develop a marketing plan on a start-up company budget. “We’re really very deliberate about getting the message out,” he says. Tintri relies on traditional marketing methods such as trade shows and meeting with analysts, but it also has a significant presence on social media, including more than 60,000 Twitter followers. “We are using the Internet to our full advantage,” he says.

The industry has taken notice of Tintri’s solutions. In October 2015, the company was named a Visionary in Gartner Inc.’s 2015 Magic Quadrant for General-Purpose Disk Arrays for its ability to execute and for its completeness of vision. This is Tintri’s second year in the Visionaries Quadrant after its debut in 2014. The Magic Quadrant for General-Purpose Disk Arrays recognized Tintri for its Tintri VMstore T800 Hybrid-Flash Series storage products.