Back to Profile Gallery > Loram 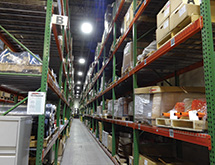 As one of the leading providers of maintenance of way services to Class 1 and short-line railroads, Loram knows the importance of being on the right track. That’s why, when Director of Strategic Sourcing John Pilarski joined the company two years ago, he was given the responsibility of leading the supply chain team’s transformation to a more strategically focused group. This change in focus would assist with putting the company on a track that would meet its long-range strategic growth goals.

The Minnesota-based company has been providing track maintenance services and equipment since 1954. Its services include rail grinding, ditch cleaning, shoulder ballast cleaning and rail handling. These tasks are accomplished through equipment such as the company’s RGI and RGS grinding equipment, the Raptor rail-handling system and its RAILVAC excavator equipment. In everything that it does, Loram says it views its key suppliers and vendors as a crucial link in its supply chain and its overall success. “We look at many of our supplier relationships as partnerships,” the company says. “It’s in our best interest to help them meet our needs.”

Pilarski joined Loram in late 2013 after spending numerous years overseeing the supply chain operations at several other companies. He indicated that his most recent roles before joining Loram involved revamping supply chain groups through the use of Lean practices to assist these organization grow into more efficient and effective organizations. This is how he garnered the attention of Loram. “I was hired to assist with transforming the supply chain team from a mostly tactically focused organization to one that has a more strategic focus,” Pilarski indicated.

Although Loram had been highly successful and grown quickly, the supply chain group was not positioned to lead the company to the next level. The situation within Loram’s supply chain when Pilarski took the reins was very functional, but not necessarily forward-thinking, he says. The group had a good base to build from, but needed to direct some of its attention to a more long-range plan.  Management wanted to rebuild the supply chain in a way that would take it and Loram to the next level, but much of the team was unfortunately mired in the daily tasks that were in front of them. “One of my initial observations was that from an organizational standpoint people were focused predominantly on the short-term day-to-day activities, while there was little or no focus on long-range planning,” Pilarski says.

With management oversight for the company’s strategic sourcing, inventory control, warehousing and supplier quality control, Pilarski set about driving Loram’s supply chain in a more holistic direction. “To achieve our goal, I gathered my team together and we sat down to develop a vision and strategy document,” he says. “Once the team created the vision and strategy document, we conducted a brainstorming session to develop a list of tactics and projects needed to actually move forward to meet our end goal.”

What resulted from that session was a list of more than 70 projects and initiatives earmarked to be rolled out over the next several years.  Pilarski indicated that over the last two years Loram has utilized their Lean and process improvement practices to implement quite a few initiatives. A few of the changes included reorganized physical warehouse space for more efficient usage, redefining specific supply chain roles and responsibilities within the company, implementing new supply chain policies and procedures to ensure meeting its ISO9001 certification, implementing a new supplier assessment and on-boarding process, and changing the overall philosophy behind Loram’s supply chain operations. With these and other changes being implemented within Loram’s supply chain organization the company has made great strides in becoming a more strategically focused supply chain team. With the company’s increased focus on continuing to penetrate the overseas markets, these improvements have become even more important to Loram’s continued success.

In some cases, the improvements made to Loram’s supply chain were simply a matter of utilizing its physical space more efficiently. For example, Pilarski says the company reorganized its warehouse facility to take advantage of using the additional vertical space available within their buildings. By implementing some key changes within the warehousing space – such as utilizing higher racking, installing a narrow wire-guided aisle configuration, utilization of new wire-guided forklifts, and bar coding the warehouse racking – the company was able to free up approximately 8,000 square feet of space in its warehouse facility. This space was promptly transitioned into additional production space. Pilarski says the use of the narrower wire-guided aisle systems in its warehouse bays also made it possible for Loram to utilize more cubic feet of storage in a substantially smaller footprint.

Another improvement was centered on the company’s effort to more clearly define the roles and responsibilities both within the Supply Chain organization, as well as outside the department. Specifically, Pilarski indicated that Loram’s Supply Chain group was staffed with both commodity managers and buyers, but that the two disciplines were spending a majority of their time processing purchase orders and expediting deliveries. Neither of the positions was focused on the strategic portion of the supply chain such as researching new sources, conducting pricing and negotiation discussions, or managing the supplier relationship. The company adjusted the roles within the team so that it now has the commodity managers spending a majority of their time on the strategic aspects of sourcing, while the buyers are spending a majority of their time on the day-to-day tactical aspects of purchasing. Additionally, the commodity managers are more directly engaged with their engineering counterparts to become fully integrated in the sourcing of new product, thus allowing the engineers to focus on their design responsibilities.

As with many companies, there is always a resistance to change.  Although Loram’s team members were open to discussing change, this was still one of the more challenging aspects of the entire transformative process. Assisting employees in understanding and embracing the cultural shift has been a major focus for Pilarski and his team. In the case of engineers conducting their own sourcing activity, Pilarski stated it was a situation where the company simply outgrew many of the old processes that were in place. To assist with the transformation of the supply chain roles and responsibilities, the company set up supply chain overview meetings to discuss the changes, the commodity managers met with their respective engineering counterparts to provide insight into the role changes, and the team met with their respective strategic suppliers to also discuss the transformation being implemented. Pilarski indicates that although the team has made great strides in getting other departments to understand the new supply chain roles and responsibilities there is still a long way to go before these processes are seamlessly integrated into Loram’s culture.

Pilarski indicated that along with the many processes changes that have taken place over the last two years, the Supply Chain team is also focused on developing a supply base that can deliver complete subsystems in a just-in-time method. This initiative is imperative to meet Loram’s long-range plan of transforming itself from a manufacturer to an integrator of systems.

Although the company has made significant progress in transforming its supply chain into a more strategic, forward-thinking organization, Pilarski says Loram is not done yet. The company continues to enact sweeping changes throughout its operations, and Pilarski says the next level will be for the company to effectively expand its supply chain overseas.  The team is poised and ready to take on this next task.

“We currently own a majority of the market space here in the U.S. for grinding and much of our other types of work,” he says. “Putting together a global supply base is going to be key strategy for our future growth.”